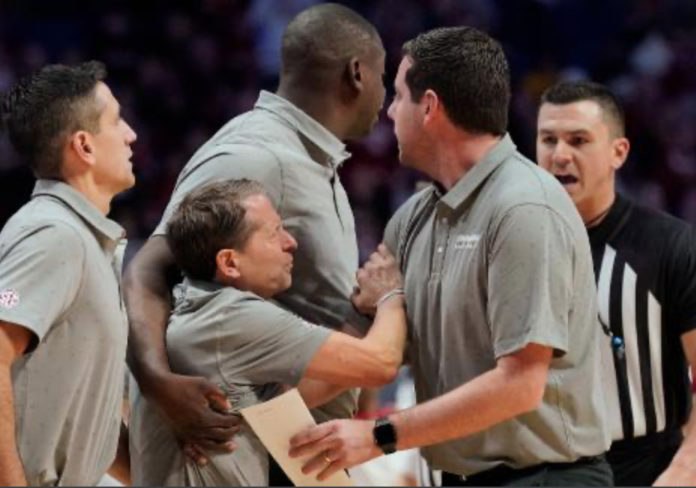 Arkansas’s listless showing in its first loss of 2021-22 presented me with a moral dilemma of sorts.

For years, I bemoaned Mike Anderson’s unverified boasts about his toughness. He’d implore us all to “pray for that damn bear” if he ever ended up in a fight with one.

I never saw that kind of passion from Anderson in his largely undistinguished eight-year run as head coach. Now, I’m witnessing refs and Oklahoma’s game plan generally igniting Eric Musselman’s fuse in the first of a four-game series with the Sooners in Tulsa.

Considering how terribly the Hogs played at both ends Saturday in the 88-66 loss, I should’ve been thrilled. But the theatrics didn’t feel right. And I suppose it’s because I didn’t give Musselman enough credit for simply seizing a chance to pump life into this squad. For a few games now, we’ve seen a deeply flawed team survive against a soft schedule.

From December 11 forward, though, be prepared to see a lot of analysis of how this team fares after Musselman’s Oklahoma breakdown with 3:30 left in a game that started bad for the Hogs and ended worse:

Of course, the other Hogs combined to only make three of 16. And ESPN2’s commentators repeatedly but accurately noted the team’s pedestrian long-range numbers as a problem.

JD Notae’s season stands as emblematic of the team’s troubles: he’s been a remarkably efficient player inside the arc. On two-point attempts, the senior guard’s hitting at a 53 percent clip, but his 20-for-74 showing from three drags him down to 41% overall.

Notae’s the most aggressive shooter and scorer on the team, so that’s somewhat tolerable, especially since so many of his misses come on “heat checks” where he’s already drained a three-pointer on the previous trip down the floor. But the fix comes when the trio of transfers (Stanley Umude, Au’Diese Toney, and Chris Lykes) starts to warm up.

To be clear, neither Toney nor Umude is going to be a volume shooter. But the former improved his three-point accuracy greatly from his first two years at Pitt to his third, and the latter knocked down 101 threes over three seasons in South Dakota to the tune of 34 percent.

Both need to be able to make one or two a game to keep defenses honest. Thus far, Toney and Umude own a combined eight made threes in only 23 attempts over 10 games. That’s much less than expected at this juncture going into the season.

That brings us to Lykes. The 5-6 dynamo is posting double-digit scoring, but he’s not shooting well (38 percent overall, 10-of-32 from three) or creating much offense (20 assists).

So this all sounds very simple, I guess, but Lykes’ history at Miami suggests he and Notae should be setting up Umude and Toney way more often. And this is where Musselman’s transfer philosophy gets severely tested: when you collect a lot of players who produced in droves elsewhere, can you keep them happy?

Back to Musselman now, because his fiery demeanor prompted this take in the first place. He had clear, justifiable grievances about a woefully inconsistent officiating effort, but refreshingly, his postgame comments showed he properly assigned blame for the collapse.

Arkansas getting “out-toughed,” as Musselman succinctly described the game, really stood out the most. And yet, given Arkansas’ lack of elite competition so far, this shouldn’t surprise greatly.

Tanner Groves, the Eastern Washington transfer, presented a major matchup issue for Jaylin Williams, leading to his foul trouble. Groves might’ve resembled a sort of idle lummox with his headband, but he’d drift to the perimeter deftly and create space.

Musselman’s anger over the officiating notwithstanding, the coach confirmed that OU’s game plan and execution of it beat the Hogs Saturday, not the stripes. Groves’ brother Jacob, and fellow Sooner post Ethan Chargois, didn’t create stat sheet ripples (combined 19 minutes and nine points) but they proved useful in spots.

Meanwhile, Arkansas tried to force the tempo with smaller lineups. That left Connor Vanover largely sidelined after some early run, and Trey Wade barely made it on court at all.

That presumably will change after finals. Arkansas gets two more non-conference foes—Hofstra in North Little Rock on Dec. 18, followed by Elon on the 21st—before SEC play commences.

Even if the quality of competition softens, Musselman must capitalize on that by getting contributions like those Groves and Chargois gave OU coach Porter Moser in Tulsa. Wade, Vanover, Johnson, and both Robinsons (KK and Jaxson) need more minutes, and perhaps these two games will give Chance Moore some action.

Arkansas faltered Saturday in most facets. It’s hard to forget a showing like that in a big moment, but it’ll be easy to forgive it if Musselman’s meltdown leads to immediate dividends. It sure did after a massacre at Alabama last season. Whether or not it happens this year, though, comes down to the largely unopened gifts sitting on the Razorbacks’ bench.