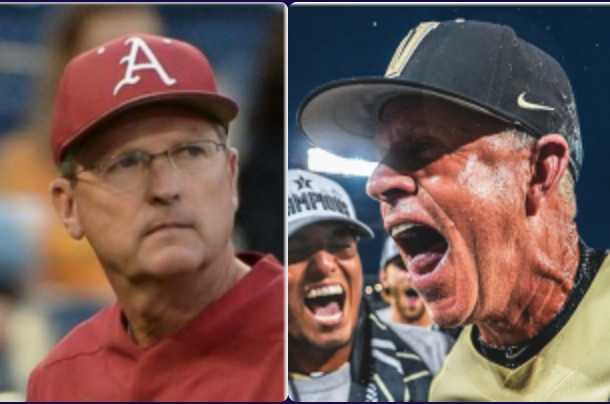 The No. 4 Arkansas baseball squad (36-13, 16-9) got off to a rough start in their series opener with No. 24 Vanderbilt Commodores (33-15, 13-12) in Fayetteville this weekend. And things were also looking pretty bad in the third inning of Game 2 as Vanderbilt erupted for five runs to go up 5-0.

But Arkansas scored one run in the bottom of the third and then four in the fourth. A three-run home run by Cayden Wallace — his second long ball of the game — gave the Razorbacks a 6-5 lead. The Hogs would tack on two more runs and by the end of top of the 6th inning and were up 8-6.

That’s when lightning struck, and not in the proverbial kind of way.

A weather delay, prompted by lightning within an eight-mile radius of Baum-Walker Stadium, suspended Game 2 until 11 a.m on Saturday, at which time Arkansas finished the job of wiping the floor with the Commodores.

Faced with a five-run deficit after three innings, Arkansas baseball used a little magic to come roaring back before falling, 9-6, in 10 innings to Vanderbilt on Friday night at Baum-Walker Stadium.

Arkansas’ lead in the SEC Western Division dropped to one game with five contests left to play in the regular season. Second-place No. 10 Texas A&M improved to 31-16 and 16-10 in SEC play following an 8-7 win against Mississippi State on Friday night.

The “legally cheating” Commodores, as sportscaster Mike Irwin refers to them in the section below, jumped all over Razorback starter Connor Noland for five runs in the first three innings of the ballgame. That silenced a boisterous season-high crowd of 11,772. Noland went five innings in the outing, allowing five runs on six hits and three walks while striking out five.

The Arkansas baseball comeback began in the bottom of the fourth on Brady Slavens’ first of two home runs. Slavens’ first of the night cleared the JB and Johnelle Hunt Family Baseball Development Center in right, cutting the Hogs’ deficit to four.

He followed up Robert Moore’s two-run, two-out blast to left in the fifth with his second solo shot of the night as Arkansas made it a one-run game on the back-to-back home runs. Slavens, who finished with two hits and two runs batted in, now leads the Razorbacks in homers with 13 on the season.

As the crowd began to respond to the surging Hogs, a raccoon emerged down the left field line and ignited an already buzzing Baum-Walker Stadium. The Arkansas offense fed off the fans’ energy brought on by the Rally Raccoon, tying the game at five apiece on Jace Bohrofen’s single through the left side in the bottom of the sixth.

Vanderbilt would reopen a one-run lead in the top of the seventh, but Arkansas responded again in the bottom half of the frame. Moore led off the inning with a double before coming around to score on Chris Lanzilli’s groundout to second.

Tied at 6-6, the Razorbacks turned the game over to relief ace Brady Tygart with two outs in the eighth. The true freshman retired the first four he faced before running into trouble in the top of the 10th after a walk and double to start the frame.

Tygart nearly escaped the inning, but Vanderbilt’s Enrique Bradfield hit a three-run blast on a 1-2 breaking ball with two outs to break the deadlock in extras. Arkansas went down in order in the bottom of the 10th to seal its 9-6 defeat.

Arkansas vs Vanderbilt is the Hogs’ only opportunity to knock off a SEC team from Tennessee this regular season with the Volunteers off the Arkansas baseball schedule.

“I think we’re going to go into the tournament and shake a lot of heads too with a team that’s at the top of the (SEC) East,” junior second baseman Robert Moore said following the sweep of LSU.

It’s notable that No. 1 Tennessee now holds that spot since Vanderbilt laid claim to it so often in the past. One reason that Vanderbilt baseball has been historically dominant is a program that allows them to “legally cheat,” as Arkansas sportscaster Mike Irwin put it last summer. Opportunity Vanderbilt, which is based on similar programs at other private colleges like the Ivy League schools and Rice, allows Vanderbilt to choose from a wider pool of talent and get better players than most other SEC schools.

But that hack isn’t quite cutting it so far this season for Vandy, given the Commodores’ .500 SEC record heading into the series. The Razorbacks and Vanderbilt are in opposite boats when it comes to RPI, which ranks teams based on their record and strength of schedule. Arkansas is ranked 4th but has an RPI ranking of 21. Meanwhile, the Commodores are ranked 24th but are No. 4 in the RPI.

The Commodores have struggled to maintain any success in the SEC through the season, and have only recently crawled back into the rankings after winning three of four series, including a series victory at Georgia this past weekend.

The below published before Friday’s game:

They are scoring 6.3 runs per game in their last 12 conference games. Arkansas has only scored 5.3 runs in that same time frame. The Hogs scored 21 runs at Auburn, which was the first time since the Mississippi State series a month ago that Arkansas has put up over 20 runs in a single weekend.

Arkansas baseball fans can breathe a little easier now that Robert Moore had a productive series. The Leawood, Kansas native went 4-13 with a home run and five RBIs.

Senior center fielder Braydon Webb has been on fire as of late. Over the past two series, he is 10-20 with five free bases, three home runs and eight RBIs.

Senior shortstop Jalen Battles broke a 2-26 slump with a pair of hits and RBIs Sunday. Senior first baseman Brady Slavens broke a 1-12 slump going into Auburn by going 3-10 with three walks. Junior left fielder Zack Gregory is only 1 for his last 14, but has three walks and three hit-by-pitches in that span.

Freshman first baseman Peyton Stovall has disappeared as a result, as he did not make an appearance against Auburn. Senior right fielder Chris Lanzilli has also seen his role reduced to one start over the weekend despite continuing to produce hits, likely in an attempt to improve the defense.

Vanderbilt’s offense is carried by their big three in the order. All three of them are streaking for the Commodores.

The lineup is led by senior first baseman Dominic Keegan. He is batting .392 with a team leading 11 home runs and 51 RBIs. He is 9-23 with six walks over the past two SEC series with four home runs and 10 RBIs.

Junior right fielder Spencer Jones is second on the team in all three categories with a .386 average, seven home runs and 41 RBIs. He is on a 19-game hitting streak, including a 6-6 performance Tuesday against Indiana State. He is hitting .429 in that span with two home runs and 19 RBIs.

The defending SEC freshman of the year, Enrique Bradfield Jr., mans the leadoff spot, hitting .297 with six home runs. He is always a threat to run, going a perfect 34-34 on stolen base attempts so far this year. He was 7-14 with a home run and two RBIs against Georgia last weekend.

Not everyone in the Vanderbilt lineup is hot. Sophomore Jack Bulger was 1-12 against Georgia. Senior second baseman Tate Kolwyck is 0-10 in his last three starts. Junior shortstop only has 1 hit in his last 24 at-bats.

The Commodores will use another left-handed freshman Sunday. Holton has pitched 11 shutout innings in his past two starts. However, last time he did that, he allowed seven runs over 1.1 innings in his next start at South Carolina.

Holton has struggled on the road in conference play, with a 7.02 ERA that is inflated due to the meltdown in Columbia. Vanderbilt is 8-1 when Holton gets three or more runs of support, with the line loss coming to No. 3 Oklahoma State.

For Wiggins, it has been an up-and-down season. The hard throwing sophomore has a misleading ERA due to his right start at Texas A&M where he only recorded one out.

At home during SEC play, Wiggins has a much better 3.26 ERA. He is also coming off a solid start at Auburn, where he allowed three runs, one earned, over five innings where he had to pitch around some unusually sloppy defense.

Both pitchers have the potential to work late in the game, but both have also had starts where they cannot stop the bleeding early.

Arkansas is hitting their stride at the right time. A dominant series against Vanderbilt will send a message to the rest of the league and the NCAA’s RPI staff.

The Commodores have struggled to maintain continued success during this season and Arkansas has been nearly unbeatable at home, not losing a home series since 2019. The Razorbacks are 19-1 in the last 20 home SEC series.

This weekend should show any doubters that Arkansas is once again a championship contender. This weekend is about securing their spot in the top-8 national seeds and demanding their due respect.

Arkansas sweeps Vanderbilt in a tightly contested series with a Saturday pitching duel and a wild finale.