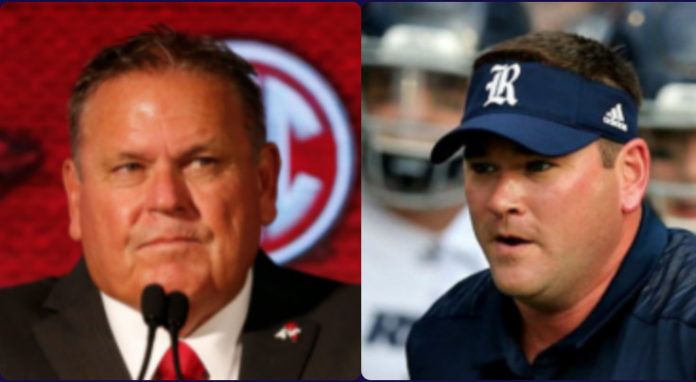 That program hasn’t produced a first-round NFL Draft pick since Earl Cooper in 1980. Arkansas, by comparison, has produced 13 first rounders since then and has a potential two more on this current team in Treylon Burks and Jalen Catalon.

Nowadays, as a Conference USA team, Rice shouldn’t be able to walk into the home stadium of an SEC team not coached by Chad Morris and beat them. That’s why the Owls are nearly 20 point underdogs in Saturday afternoon’s Rice vs Arkansas season opener.

Historically, of course, Rice and Arkansas were both members of the old Southwest Conference. Many Arkansas football fans think of Rice as a cellar dweller in those SWC decades while Texas, Arkansas and sometimes Texas A&M were kings of the hill.

However, that wasn’t always the case.

That’s why Arkansas, despite winning 16 of its last 18 games against Rice, is only ahead 35-29 in the all-time series. Which means, decades ago, Rice was perpetually beating Arkansas like a rented mule.

Yes. You read that right.

One of the biggest reasons behind the power shifting in the old SWC was the introduction of the two-platoon system in the years preceding 1964 — the same year, coincidentally, the Arkansas football program won its only national title.

Power Shifts in the Southwest Conference

It’s hard for younger college fans now to imagine, but there was a time when college football was not unlike soccer: 11 guys played. On both sides of the ball. The SAME 11 guys per team.

Rules kept teams from regular wholesale subbing of fresh players in and out, or the specialized subbing of smaller units on defense for a particular down-and-distance situation that we know today.

Rice, TCU, Baylor and SMU had been regular contenders for a SWC title when you needed a great 11 only and not layer after layer of talent behind them.

For a while, Texas, Texas A&M and Arkansas could often be found near the bottom of the league standings.

A game with Rice in the 1950s for Arkansas football fans might be on par with today’s matchups against a Georgia or Auburn. Rice football supporters then expected even bigger things to come, so they built the biggest stadium in the SWC in 1952 on Rice’s campus, with a 75,000 capacity.

That, folks, was ridiculously large some 69 years ago. Occasionally, like when Texas or A&M came to town, or the NFL’s Super Bowl in 1974, they’d actually fill the place.

In the 1950s, as the NFL moved to separate units of offense and defense and away from “two-way football,” the college rules makers began relaxing their substitution regulations.

Such changes paved the way for teams like LSU and coach Paul Dietzel in 1958 to introduce the idea of specialized units for offense and, especially, defense. That’s where Dietzel created the famed Chinese Bandits, whose specialized skills were instrumental in the Tigers’ first-ever national championship.

The programs that had the numbers — i.e. the big public state universities — began to gain the upper hand. It became normal to see 150-man rosters, and that’s without the freshmen playing.

Rice, TCU, SMU and even Baylor for a time hit the skids.

In 1960s, the Rice football program fell behind in competing with Texas, Arkansas, and the other financially well-supported public institutions in the SWC. Rice always numbered far fewer overall students than the rest of the conference even in its heyday, and now the whole game was different.

The advent of professional football in Houston (and Dallas) in 1960 also had a huge effect on the support of the Rice football program.

Against Arkansas, however, even as Rice became a bottom-feeder, the Owls would occasionally be a thorn in the Hogs’ side.

That’s because Rice could still attract the occasional difference-maker, but failed to surround its stars with much ability. Stahle Vincent, for example, one of the trailblazing African-Americans in the SWC in the late 1960s, could do it all at quarterback, but even that wasn’t enough with little to no protection up front. Rodrigo Barnes at middle linebacker chose Rice over hometown Baylor, could have played anywhere, and starred in the SWC before continuing his career with the Dallas Cowboys.

Arkansans knew that as bad as the rest of the Owls seemed to be in the late 1970s, future NFL quarterback Tommy Kramer, gave them a chance. Arkies knew of native sons like Chuck Latourette from Jonesboro or Bruce Woolridge from North Little Rock, high school stars who cast their lot with the school in Houston.

Latourette, in particular, was quite the all-around star for the Owls in the middle 1960s, moving on to the NFL as a punter and returner.

The Owls have a history of springing surprises on the Hogs, as they did in the disastrous finish of what had been a highly anticipated 1972 season with Joe Ferguson at quarterback.

The Hogs watched the Owls score in the final seconds at War Memorial Stadium and leave with a 23-20 shocker. Lou Holtz’s up-and-down 1980 team, the first of his teams offering indication to fans that the mercurial Holtz was, in fact, fallible as coach and recruiter, blew a 16-0 lead in the fourth quarter to the Owls and lost 17-16, also in Little Rock.

It was even a toss-up for the season finale in 1991 when the Hogs and beleaguered head coach Jack Crowe entered the game at Little Rock with a 5-5 record. This exchange occurred on air (UA sports radio) just before the teams kicked off that day:

Hog color man and SID Rick Schaeffer, excitedly: “If the Hogs can win today, they will most likely earn a trip to Shreveport to play in the Poulan/Weed Eater Independence Bowl.”

Third man in the booth, former Oklahoma coach and former Hog player and assistant coach Barry Switzer, incredulously: “RICK? WE CAN GO TO A BOWL GAME?!?”

Such was the position Arkansas football found itself in that season and the school’s history in the SWC wrapped. Arkansas, starting a walk-on quarterback out of Mena, Wade Hill, played a solid game and blanked the Owls 20-0, landing that spot opposite the SEC’s Georgia in Shreveport.

That 1991 game was the last time the schools have met.

Arkansas began competing in SEC football the following season. Rice would eventually hire former Razorback head coach Ken Hatfield and earn part of a five-way tie in the SWC (only in the SWC, right?) before the league soon ceased operations.

Four SWC programs joined up with the Big 8 to form the Big 12 in 1996. Rice, Houston, SMU and TCU were left searching for a home, and the Owls found theirs in Conference USA.

Decades ago, the teams usually played in early November as SWC opponents. For this matchup 30 years after the last one, they each open their seasons instead of ending them.

Rice is now in the position on the Arkansas schedule of a Tulsa or Louisiana-Monroe. Arkansas in the SEC in recent years has been in the position of a Rice, the team that regularly gets beat down by the stronger powers and can’t fill its 75,000-seat stadium.

This season, that will end as early as Week 2 against Texas if Arkansas can take care of business in Week 1.

How to Watch Arkansas vs Rice

Jim Harris has covered Arkansas Razorback football since 1976 for a variety of state media organizations, including the Arkansas Gazette and ArkansasSports360.com. He provides commentary each week as part of the team on THV’s “HogZone” Saturdays at 10:30 p.m.