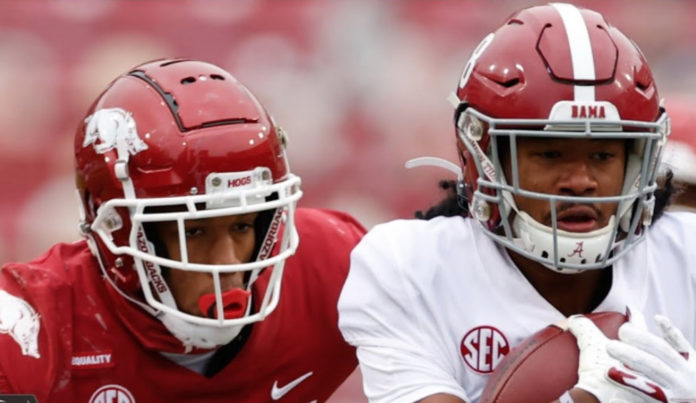 There were the two strikeouts he made when hiring Joe Craddock and John Chavis, his offensive and defensive coordinators.

And then, of course, the fact he was canned after only two seasons (well, almost two full seasons).

But the final “two” Chad Morris becomes known for could end up being a positive one.

Because for all his shortcomings, it’s hard to deny that man and his staff could recruit. His 2019 class was at one time ranked by Rivals at No. 12 in the nation, including four defensive ends that were ranked as four stars by at least one major recruiting service.

While end Collin Clay has since transferred, three of those ends — Mataio Soli, Eric Gregory and Zach Williams — have gained valuable experience in the last couple years and are now a big part of the defensive line depth that the Arkansas football program must have to beat the SEC big boys.

But the two crown jewels of that class, it turns out, play farther away from the line.

That would be wide receiver Treylon Burks and safety Jalen Catalon, whose production at the college level slightly redeems Morris’ legacy. Both are on a number of preseason All-American lists and should be Arkansas’ most dynamic playmakers on the offensive and defensive sides of the ball this season.

One of their most impressive accomplishments, however, could come after the season.

When it comes to 2022 NFL Draft ratings, no one is more optimistic about Burks and Catalon than The Athletic’s Dane Brugler.

In fact, in Brugler’s latest list of the top 50 prospects for the 2022 NFL Draft, he ranks both Burks (No. 15) and Catalon (No. 17) in this top 20. He’s what he writes about each of the underclassmen who will draft-eligible after this season:

“A receiver with the size of a linebacker, Burks is a bully of an athlete who thrives on physicality to dominate the catch point in contested situations.”

“A hybrid slot receiver for the Razorbacks, he is clearly raw with many of the details of the position, but he thrives through contact and his competitive toughness (before and after the catch) is something you feel on tape.”

“Catalon has only one season of starting experience, but he was everywhere on the Razorbacks’ 2020 film.”

“While undersized, there are explosive elements to his game and his instincts and compete skills make up for his lack of inches – somewhat similar to [5’9”] Antoine Winfield Jr. when he was coming out of Minnesota.”

“Four programs have multiple prospects in the top-20 of this list: Alabama, Ohio State and Texas A&M are expected, but Arkansas is a pleasant surprise.”

If Catalon and Burks do end up going in the top 20 of the 2022 NFL Draft, it will be the first time that two Razorbacks have gone that high since 1989 when Wayne Martin went at No. 19 to the Saints and Steve Atwater went at No. 20 to the Broncos.

The fact that the Razorbacks are now hanging with Ohio State and Alabama in terms of Top 20 draft talent, if only for one year, is notable. It’s one of the few places where the Hogs are making up ground on the traditional blue bloods.

When it comes to recruiting out of high school, Arkansas has made good strides in the last few years under Morris and Sam Pittman. But even though Pittman’s most recent class finished at No. 25 in the nation, it was still No. 9 in the SEC according to 247Sports.

Whenever Arkansas gets a 5-star to sign, which happens once every few years, it feels like a state holiday. Meanwhile, Alabama and Ohio State are inking 6 or 7 of those kinds of players in a single class.

But one place where Sam Pittman and his staff can match Nick Saban, Ryan Day, Jimbo Fisher and others is developing the talent they have.

That is, in each class make sure as many of the three and four-star players they get become contributing players. Then develop a handful of those into All-SEC caliber players. Of those, annually send two to four to the NFL.

This is the same formula by which Arkansas won big in the Southwest Conference decades ago.

The fact that nine Arkansas football seniors chose to return to school for an additional year in 2021 says a lot about their faith in this current staff’s ability to develop the talent they already have. One of those players is left tackle Myron Cunningham, who was rated as a middle round pick in the 2021 NFL Draft had he left.

As long as Arkansas keeps developing its highly promising bluechip recruits into starters and all-SEC type players, the NFL Draft side of things will take care of itself. This is the SEC, after all, so if you can perform here, scouts will know you can perform in the NFL.

That’s what they are counting with Treylon Burks.

“He’s extremely well put together, with great length, strength and lower-body explosion. His length and strong hands most definitely are NFL-caliber, he works well in traffic and brings a physical style of play to the field reminiscent of Anquan Boldin at times.”

“Yet Burks isn’t just a bully out there. He’s surprisingly fluid and supple as a receiver, able to make “little man” movements in a big-man body.”

“We’re not expecting Burks to be a sub-4.5 40 runner, but his ability to get vertical and separate are what make you sit up in your chair when watching him. Burks operated mostly as a big slot the past two seasons, and with NFL teams utilizing more of these types of targets, it only adds to his appeal in league circles.”

One thing to monitor going forward is how well Burks recovers from an injury that might have been suffered on the above catch.

“He really stretched out and made a one-handed catch,” Pig Trail Nation analyst Mike Irwin said.

“And then, when he got up, he was limping. So maybe he did something to his ankle. I’m not sure. Ankles can be problematic. Look. I have no inside information. But I’m going to take a guess here and say that if they were playing Texas this week, he would play.”

“Warren Thompson is in that Treylon Burks mold. He’s a tall guy. He can run. He’s got speed. He’s the four-star out of high school.”

At the 14:07 mark, Irwin discusses the below column running on our site in which we break down how good Burks can become in 2021:

Mike Irwin also broke down how the Razorback offense is meant to work under offensive coordinator Kendal Briles.

It all starts with speed on the edges.

“That just tends to spread your defense out, and then power up the middle.”

“Because if you’re spread here, you’re not as strong up the middle. Then what you do is you just go back and forth. If you think they’re lined up to stop you running, throw wide. If they’re going to cover your receivers, go up the middle.”

“Those people who are excited about this team offensively, are excited about the fact that we may now see that philosophy more than we did last year, which again is spread them out, force them to cover your wide receivers, then when they think you’re going to throw it, pow, you hit him up the middle and run over them.”