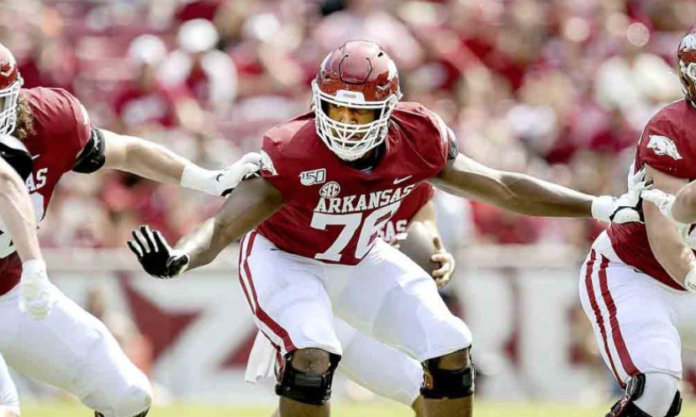 While Razorbacks Feleipe Franks and Rakeem Boyd generate many headlines on the offensive side of the ball, the Hogs’ top 2021 draft prospect rarely gets the same amount of buzz. Of course, such is life for most any starting life tackle who toils in near anonymity while skill position players get the attention. .

In his second year as a Hog after transferring from Iowa Central Community College, Cunningham has catapulted to the top of the list among likely 2021 NFL Draft Razorback prospects.

NFL Draft analyst Dane Brugler, who writes for The Athletic, said Cunningham is “at least the top draft-eligible prospect” on the Hogs. “I haven’t seen a lot of the younger guys. Of the guys eligible for the 2021 draft, the guys that I’m really focusing on for the cycle, he’s the best of the group.”

Brugler talked to me about what makes Cunningham, who put on 20 pounds of muscle this past offseason, a top prospect.

He started 10 games in 2019 and in 383 pass blocking plays allowed just one sack. He posted his best pass blocking grade with an 87.8 against Alabama.

“There’s a lot to like about him,” Brugler said. “He was a JUCO guy and he goes to Arkansas and wins the starting job. And he’s just been really reliable, really solid. Good size, 6”6’ around 325 lbs, good length, really like his hand strength at the point of attack. His movements in pass protection are very controlled, doesn’t make a lot of mistakes out there. I like his awareness, the way he can pick up rushers. He’s just a steady type of player.”

He continued by explaining what the NFL looks for in an offensive lineman.

“In the NFL, when evaluating offensive linemen you just want guys you can rely on. Guys that aren’t going to go out there and make mistakes and you don’t have to worry about them. They don’t have to necessarily be elite where they just overwhelm guys. NFL teams just want blockers that get the job done. They complete the mission. I think that’s something Myron Cunningham does more than not.”

When Cunningham posted that 87.8 pass protection grade against Alabama in 2019 he was going against an NFL defensive line. That line had players such as 2nd round pick Raekwon Davis and projected first round pick Christian Barmore.

Brugler added what Cunningham can do to improve his draft stock.

“If he finishes strong this season, a big part of it will be does he get an invite to Senior Bowl. That’s the top all-star exhibition game for prospects. If he does, that will be a great win for him. More importantly he needs to go there and show out and show that he belongs. So is he able to finish this year strong and is he able to do really nice in the process during the all-star circuit, the combine, and all these workouts.”

As far as draft projections, Chad Reuter, a longtime NFL Draft researcher, says Cunningham could go as high as the second round. (Each round contains 32 picks.)

ARK LT Myron Cunningham is a stone wall in pass pro again tonight and gets after it in the run game. There’s gonna be some starter-quality OT in the 2nd and 3rd rounds this year given the depth at the position.

DraftSite.com has him going 193rd to the San Francisco 49ers in their latest mock draft. That down from mid-September, when the site’s analysts projected him getting drafted 119th to the Pittsburgh Steelers.

“I think he has a chance to sneak into the top-100 picks,” Brugler said. “Because in the NFL, the supply and demand for offensive lineman, there is much more demand than supply. So if you’re an offensive lineman and you check a lot of the boxes you’re going to get drafted pretty high.”

“I think he has a chance to do that. He needs to finish strong and do well in the process to hear his name sneak into that top-100. But regardless, I think he, if he doesn’t go top-100 he could be a mid-round pick. A guy that comes into camp and has the opportunity to compete for a job.”