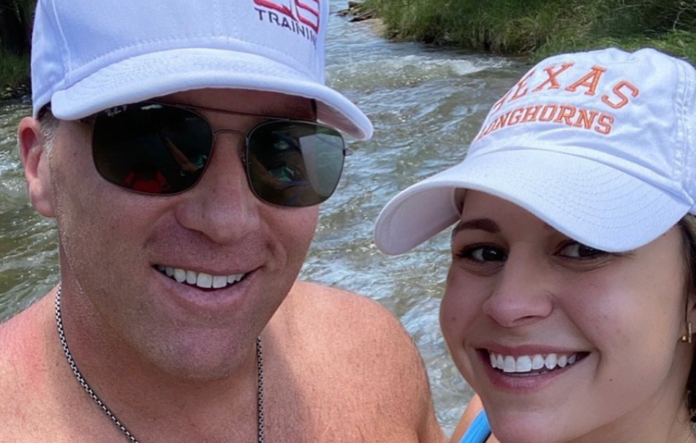 Nearly 22 years ago, Clint Stoerner dropped to one knee, and then both knees, and fumbled away a ball against No. 1 Tennessee in the pivotal moment of one of the most heartbreaking losses in Razorback history.

This past week, he dropped to single knee again. This time, thank God, the story turned out a lot better.

Stoerner, who now lives in Houston, proposed to his girlfriend, Lorin Lewis, in the Blue Hole Regional Park area southwest of Austin. Much to his delight, she said “Yes.”

I took her to the exact rock where I told her “I Love You” for the first time & told her “I Love You, Forever”. I’m stoked about life w/this fine ass, real ass, kick ass, all around amazing woman. I waited 42 yrs for you to grow up @Lorin_Lewis_ ?, let’s do this! ? pic.twitter.com/gC4pv1UxY4

This should be fun for Razorback fans and Longhorn fans alike to follow.

While Stoerner is one of the most prolific quarterbacks in Razorback history, and someone who maintains central Arkansas ties to this day through his insurance business and quarterback training, the 29-year-old Lewis is a 2013 graduate of the University of Texas who puts “Hook em” in her Twitter profile.

Fortunately, they have fun with it, as you can see from the hilarious Tweet below:

Even with his Texas ties, Stoerner (a Baytown, Texas native) is arguably the most popular former Razorback quarterback. He has a dynamic personality, honed by working the radio and TV circuits as a sports show host over the years.

Whether he’s chiming in on the Chad Morris firing, explaining why Cam Newton is “done” [see below], or trying to make tank tops cool again, the man knows how to deliver a hot take.

I go to pick @ClintStoerner up after his garage workout & he’s just posted up against the wall staring into the abyss. I roll down my window to see what the actual hell he is doing & this is the response I get. Never a dull moment. ??‍♀️ pic.twitter.com/Z0x3XbHkgz

Clint Stoerner’s popularity is seen in the hundreds of Razorback fans who sent him congratulations on social media after his big news.

Many of them, predictably, brought up his “Stumble and Fumble” against Tennessee when they saw his proposal picture. “Glad you didn’t fumble the ring” and “He stumbled down to one knee but definitely didnt fumble the exchange, congrats man!” were a couple of the cheekiest remarks.

But it was also heartwarming to see how many former Razorbacks and media members congratulated Stoerner on his big moment. Guys like Ronnie Brewer, Damian Williams, Drew Morgan and Steve Sullivan chimed in. Bret Bielema, who coached at Arkansas 15 years after Stoerner’s playing days, said: “Congrats @ClintStoerner welcome to the club.”

To which Stoerner replied: “Thanks Bret, I got some work to do to catch you but I think I’m on a similar track. Hope all is well brother!!”

It was especially good to hear from Anthony Lucas, the All-SEC receiver who time after time proved to be Stoerner’s most reliable target:

Personally, I’ve always enjoyed talking to Clint about college football and the Hogs. He’s someone who isn’t afraid of taking strong stands, and always gives solid reasons to back up his take.

I hope he knows it’s the ability to listen, though, that will ultimately dictate a marriage’s success.

Regardless, it’s time to say what needs to be said: Congratulations, Clint!

Here’s some great insight from his recent interview on “Hit That Line”:

I’m blown away with his ability in the return games. Really, he’s one of those guys that [is a threat] any time he touches the football, whether it’s the jet sweep or some kind of Darren McFadden WildHog-type of situation, or he’s in the receiving game.

I think in college football, that guy is the most valuable guy in the game and you’ve got to find ways to use him. Not just in the pass game, but just throughout the four quarters, in different ways in your offense.

He’s got to be the key cog, man. I know that’s difficult when you’ve got a Feleipe Franks, you’ve got a Rakeem Boyd and those kind of guys, but man, Treylon is special.

Well, he’s a full body guy. You get a lot of guys that have a big arm but they move like Gumby. They don’t really transfer power from the ground up. So he’s a little bit, what I call rigid. Which is a positive to me. A lot of coaches say that that’s a negative. For me, I want my guys to be a little bit rigid. When they push and their push turns to a rotate, I want all that to be tied together. I don’t want it to be jumpy. I don’t want it to be a real twisty action.

And then obviously the ball control was key. You get a lot of guys that can put it around the park, but it’s like the ball is on the end of a wet noodle. They’re generating a lot of arm speed… That’s typically hard to control.

The last thing is that he has the power snap.

I think Cam Newton is done. After watching that week two performance versus Tampa Bay Buccaneers last year, and really just the way that there were three or four throws at critical moments in that game, where he just one-hopped the receivers.

However, do they go to that style of offense where they’re running downhill more, or do they really try to put the square peg in a round hole and get him to do Tom Brady-type things?

I don’t think either of those are very likely, and I love Jarrett Stidham [who also played for Malzahn]. So I think Stidham ends up being the guy in New England.