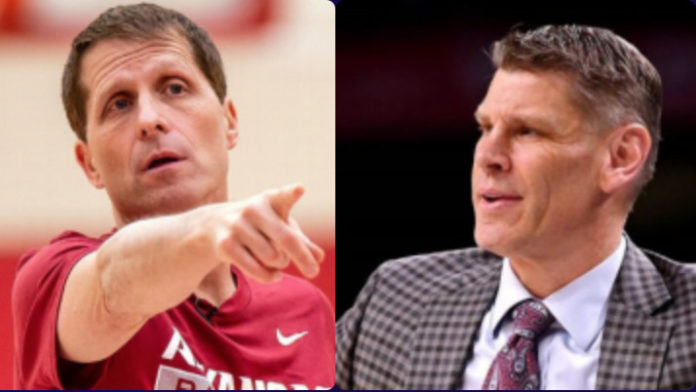 Given the basic premise all these early season games matter, let’s be real: some of the matchups simply mean more. If not to the coaches, then definitely to the fans. And probably to the coaches, too, whether they want to admit it or not — given the recruiting ramifications at play when rivals (and potential rivals) lock horns.

While the Razorbacks have played some interesting opponents on their non-conference slate this season en route to a 9-0 start, none of them matters more than Saturday’s showdown with a soon-to-be-rival to the west.

With all the factors at play, this is the headline attraction on the Hoop Hogs’ non-conference slate. First, it takes place in Tulsa, so there will be immediate bragging rights at play in a basketball-talent rich area that produced the likes of former Hogs Lee Mayberry and Reggie Chaney.

Then there’s the imminent arrival of Texas and Oklahoma into the SEC. With the Sooners moving to the SEC in the next few years, this game could provide a preview of what’s sure to be a hotly contested rivalry for years to come. Especially given how good these programs’ coaches are.

“I think it’s going to be a passionate game,” Oklahoma basketball coach Porter Moser said. “I know our fan base, Arkansas’ fan base, it’s two passionate fan bases. … I anticipate it being a high energy atmosphere.”

The game will take place in Tulsa in front of 50/50 split crowd, and features an Oklahoma team with two losses (including a home loss in its last game vs Butler). Still, Oklahoma is No. 56 in the NET through Thursday’s games, “which means they are just outside of the Quadrant 1 range needed for a neutral site game,” as Hawgbeat’s Andrew Hutchinson notes.

Arkansas, meanwhile, is bringing a lot of good and little bad into the game as it comes off the most unselfish stretch of basketball ever played under Eric Musselman as a college coach.

“A lot of the staff members that have been with us at Nevada. It’s the first time to our knowledge in seven years that we’ve had four straight games of over 200 passes,” Musselman said in a press conference this week. “So we’re still growing, still trying to learn each other. But certainly because of the scoring ability of Devo, JD and Chris Lykes, ball movement coming into the season was something we wondered how we were going to formulate roles, and share the ball.”

“It’s been a four-game stretch where we’ve done a really good job of moving the defense and taking what the defense gives us, and not forcing the issue. And we can get even better from a ball movement standpoint than we are right now, and we’ll continue to talk about it and try to move the thing even more than we have at times.”

That passing has led to some high rankings in offensive categories, per 247Sports’ Curtis Wilkerson. National rankings are in parentheses:

The Razorbacks are only No. 307 in the nation in three-point shooting, however. That could prove the difference in a close one at “neutral” site that will probably tilt more Oklahoma simply by dint of the state.

Oklahoma’s coach Lon Kruger announced his retirement in March of 2021, only days after the Sooners were bounced from the NCAA Tournament 87-71 by No. 1 overall seed Gonzaga.  Enter Porter Moser, who was announced as the 15th head coach in university of Oklahoma men’s basketball history just days later on April 3, 2021.

After taking Loyola-Chicago on their Cinderella run to the 2018 Final Four, Moser was deemed a hot name on the coaching circuit by media pundits across the country. The assumption was that he was gunning for an opening at a program high up the food chain of college hoops.  That, or he was content with putting his roots down with the Ramblers for life.  His choice of leaving Chicago for Norman came as a surprise to many, but it seems to signal that OU may have a more respected men’s hoops program than even its own fans may realize.

Yes, the University of Oklahoma is first and foremost a football school, and no, it’s not North Carolina or Duke or Kentucky when it comes to basketball.  But Moser recognized plenty of legitimate reasons to come to OU. They include stability of the athletic department, the resources available to the program and the upside that being a football powerhouse brings to basketball recruiting.

Oklahoma basketball was floundering when Lon Kruger was brought on board 10 years ago, but since that time the program’s reputation has been improved and their play has moved to consistently good.  Moser brings more of an edge to the program, with a solid commitment to building a winning culture that has shown results at every stop along the way, and he’s the kind of coach that can elevate a team from consistently good to elite.  In short, he is now Oklahoma’s version of Eric Musselman.

While their preferred style of play varies, there are some striking similarities between Moser and Musselman.  Both have found greater levels of success in their coaching careers after the age of 50 and their approaches to recruiting and roster building are extremely comparable.  Much like Musselman is now building a fence around the high-profile recruits inside the state of Arkansas, Moser emphasized recruiting the fertile ground of Chicago religiously during his time at Loyola.  The similarities between the two also extend to their reliance on the transfer portal to land impact players from junior colleges and far-flung D-I programs, a practice which is already bearing fruit at OU.

With the geographic closeness of the two schools, as well as the penchant of both to comb the transfer portal and place a premium on scouting, evaluation and networking, the recruiting trail battles could prove to be just as fascinating as the on-court action.

The hardwood history between these two teams dates back to the 1938-39 season.  Arkansas holds a 16-12 advantage over the Sooners, including a 5-0 record when the teams have met on a neutral court.  The last time the two squads faced off was on Nov. 23, 2017 where the Hogs took down the boys from Oklahoma by a 92-83 score.

After this game, the premier game left on Arkansas’ non-conference slate this season comes in the Big 12/SEC Challenge. More on those games here:

Since joining the Colonial Athletic Association in 2014, the Phoenix have never finished higher than fourth.  Elon is led by junior guard Hunter McIntosh, who led the team in 2020-21 with 15.7 points per game.

With three starters gone from last year’s NCAA Tournament squad, the Mountaineers have a little reloading to do, but head coach Bob Huggins has proven time and again he can get the most out of his roster.  Malik Curry, a senior transfer from Old Dominion, will step in and attempt to replace Miles McBride, a second-round selection in the 2021 NBA Draft.

The way Musselman sees it, this game is just as important as Arkansas vs Oklahoma. “I think right now, (we’re) just worried about trying to figure out a way to compete and play hard on Saturday,” Musselman said heading into the Sooners game. “I don’t put too much thought, to be honest with you, that it could be a conference opponent in the near future. To us, it’s no different than playing West Virginia.”

And, for kicks, let’s just include the SEC schedule in here too: