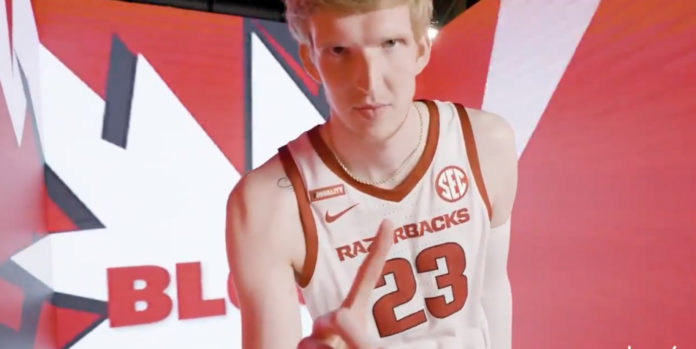 The Arkansas Razorbacks face a pivotal showdown with the Oklahoma Sooners in Tulsa, Oklahoma tday. The Hogs are riding a 9-0 start to the season, while Oklahoma will look to bounce back after a surprising overtime loss to Butler on Tuesday night. While the Hogs have played very well, they have lost a bit of momentum on the national radar. For one, they were downgraded in the AP poll from No. 10 to No. 12. Secondly, one of the major predictive game modeling outlets has reversed course from all previous game this season to chalk this game up as a loss for the Arkansas basketball team (more on that below).

Taking centerstage will the programs’ accomplished yet still up-and-coming coaching stars in Eric Musselman and Porter Moser. While these talented coaches have not met since joining their current schools, they have faced off twice in recent history. In their first matchup, Porter Moser and the Loyola Chicago Ramblers got the best of Musselman’s Nevada squad in the Sweet 16 on a last second shot from deep.

Musselman got his revenge the following season as Nevada took care of the Ramblers on the road. While there certainly isn’t ill blood between the two, they will assuredly make a push to take a lead in the series as continue their success in college coaching. With the Sooners joining the SEC in the next few years this could truly be the beginning of a long rivalry for the pair of schools that will be battling on the hardwood and recruiting trail for years to come.

When Oklahoma Has the Ball

The Sooners have a versatile group under their first-year head coach. The offense is led by transfer forward Tanner Groves who is averaging 15 points and 6 rebounds a game. As the new pieces have tried to gel together, a lack of chemistry has been apparent at times this season but the roster has solid talent. Offensively, Oklahoma ranks 82nd in efficiency with metrics ranging widely across key indicators per Kenpom. The Sooners rely slightly more on inside shots than the average team and it has paid off in dividends as they have made baskets at the 2nd highest rate in the country from inside of the 3-point line. Expect Musselman to counter by protecting the paint and instructing his guards to ease off Sooner shooters from the outside.

The Arkansas defense will face a top 100 offense for only the second time this season. It would be wise to assume that Musselman will lean heavily on guards J.D. Notae and Devo Davis to limit the Sooner offense. Chris Lykes will spell both players intermittently but may see less playing time due to his defensive limitations. The Hogs will look to continue dominating the boards and limiting second chance points. Arkansas, with an array of above average rebounders across the lineup, is currently 3rd in the country in defensive rebounding percentage. Against tougher competition this could end up being the difference. Expect all players to crash the boards hard when Oklahoma puts the ball up in this one.

The Razorbacks are slowly getting into their rhythm offensively. Guard J.D. Notae continues to lead the team with 18.7 points per game while others have continued to impress. While Notae has been a dominant scorer it will be very hard for opposing teams to game plan against a team that features 6 players that are more than capable of scoring double digits on a given night. All that said, Oklahoma will be the toughest defense Arkansas has faced up to this point in the season coming in as the 34th ranked unit in the country. This Sooner defense truly is a jack of all trades and master of none from a metrics perspective, ranging from 34-82 in key defensive metrics. Oklahoma will assuredly look to slow down Notae but will be forced to keep a close eye on a band of role players that will stretch them thin defensively.

The Hogs continue to struggle from the perimeter having made less 3-point attempts than 347 Division 1 teams to date. As the season progresses this is turning from a suspect start to serious concern for Razorback fans as stiffer competition approaches. That said, the Hogs have countered this struggle with great success shooting the ball inside. They are making 57% of attempts from inside the perimeter which is good for 21st in the country. Look for Au’Diese Toney, Stanley Umede, and Jaylin Williams to force the issue down low as guards J.D. Notae, Devo Davis, and Chris Lykes flash across the court.

Arkansas vs Oklahoma: What to Watch For

Arkansas will play away from Bud Walton Arena for only the third time this season after winning their first two neutral site games earlier in the year. Despite the early success, Hog fans will want to keep an eye on how this team manages momentum without a full crowd supporting them along the way. Oklahoma will look to get the Razorbacks out of rhythm with various defensive looks and have the talent to go on runs offensively. If the Hogs want to continue their undefeated campaign, they will need to avoid long offensive droughts and contain a talented Sooner offense.

For the first time this season Arkansas will not come in as consensus favorites based on Kenpom and Haslametrics predictive models. Kenpom slightly favors Arkansas 73-70 while Haslametrics favors the Sooners in a close one 72-70. In what fans can expect to be a battle from tip to final whistle Head Hog Eric Musselman will get a better understanding of where his squad is at. The implications of this game likely won’t be monumental come March, but a win would likely push the Hogs back into the AP top 10 while a loss could see them fall to the low 20s. In what should be a great game in Tulsa, I give the Razorbacks a slight edge.

How to Watch Arkansas vs Oklahoma