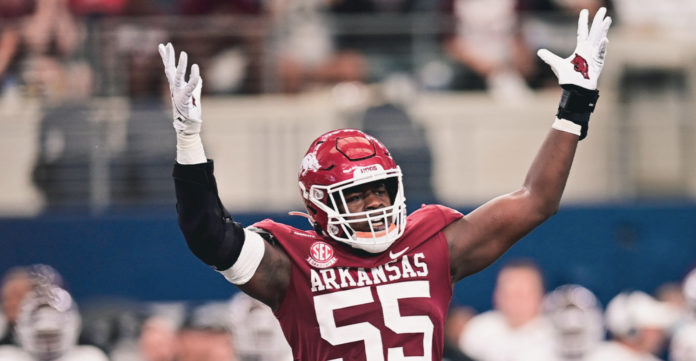 This whole chip-on-the-shoulder thing has served Arkansas football quite well up till now.

National pundits leaned and Vegas slightly toward Texas ahead of the big Longhorns game in Week 2, even though that game was in Fayetteville. The Razorbacks proved them wrong.

In Week 4, even more national analysts predicted a Texas A&M win. Vegas, too, expected the Aggies to run away with that neutral site game at Cowboy Stadium.

Instead of expectations met, preconceptions were crushed. Again, these tenacious Hogs proved naysayers wrong on their way to declaring to the world: “We own Texas now.”

So now it’s on to Week 5, with another team that’s more highly ranked than Arkansas expected to make hay at the Razorbacks’ expense.

This time it’s at No. 2 Georgia. With the kind of talent that the Bulldogs have stockpiled in the last few years on both sides of the ball, combined with good coaching and a home field advantage, it’s little surprise that Georgia is favored.

But, given how strongly Arkansas is trending, should a near-blowout be expected?

On Thursday night, the No. 8 Arkansas vs No. 2 Georgia line according to Ceasars Sportsbook was -18.5. As ESPN points out, that would be the largest spread in the history of Top 10 SEC matchups dating back to 1978 when college football split into bigger Football Bowl Subdivision programs and smaller Football Championship Subdivision teams:

The line since then had dropped to -18 but that’s still tied for No. 1 all-time.

It’s easy to understand how oddsmakers can get influenced by numbers only. Here are some side-by-side team stat comparisons from HawgBeat’s Andrew Hutchinson:

But it’s also important to consider that Georgia has played three weak sauce opponents in Vanderbilt, South Carolina and UAB and a fourth, Clemson, that is much weaker than expected.

Their numbers benefit from relatively weak opponents. Arkansas, meanwhile, has already gone through a stiffer gauntlet.

Given Arkansas football’s upward trajectory, and how every time (when healthy) its players have answered the bell under Sam Pittman, some analysts feel Vegas still underestimating the Razorbacks even though they are a Top 10 team now.

If Arkansas beats Georgia, they will become the first team to ever beat two Top 10 teams away from home in consecutive weekends.

A tall order, to be sure, but when Pittman’s group looks capable of pulling off if they play up to their potential and Georgia doesn’t bring its A+ game.

Count ESPN analyst Eric MacLain among the defenders of the faith. “How about the disrespect for Arkansas? I mean, 18 and a half points? That’s crazy,” he said on College Football Live. “They always say Vegas knows somehow, but I know what I see on tape.”

“These guys are ready to play. You kind of have that unstoppable force, immovable object with the Arkansas rush attack and that Georgia defense.”

“When you look at Georgia’s opponents offensively, they have not played a top tier caliber offense yet,” he added.

“You’re talking about teams ranked the 100s and high 90s. This will be the first real test for these Georgia Bulldogs. Which is crazy to think, the Clemson Tigers are on that schedule but offensively just not ready and at this caliber.”

“I’m Excited to see, what can Arkansas do offensively? Then for Georgia, [quarterback] JT Daniels is banged up. How much is that going to affect him?”

“He is sounding like he’s getting his big tight end back Darnell Washington back and I think that could really open up the offense just to have another playmaker, another big tight end. Golly, 6’7, 260-250. He’s a freak out on the edge.

All three of the ESPN analysts agreed Vegas is disrespecting Arkansas with this line. Watch their whole conversation here:

Line Play in Arkansas vs Georgia

For Arkansas to score a major upset against Georgia, KJ Jefferson will likely need to play the best game of his college career so far.

Is he up to the task?

It will be difficult because Georgia has freakishly good defensive line that give Arkansas running backs problems and could shut down Jefferson’s normal running lanes.

In fact, ESPN’s David Pollack thinks Georgia has the best defensive line in the nation, one full of future pros who will make a difference when studying future NFL betting tips.

“The difference between Georgia’s and everybody else’s front seven is stark. By the way, I’m including Alabama there,” Pollack told HitThatLine.com.

“There’s not a lot of guys for Alabama defense that I’m going to say are better than Georgia’s front seven.”

While giving credit to Alabama’s edge defender Will Anderson, “there’s not a lot of guys I’m taking over Jordan Davis,” Pollack says.

“Over Jalen Carter. Over Travon Walker or Nolan Smith or Adam Anderson or Nakobe Dean. I mean, the list goes on and on. I see more of a low scoring than high scoring. Arkansas’ got to stay close early in the game. Ride the emotional wave so they can continue to play that conservative defense.”

“The run game for Georgia, Arkansas with the three man front on defense. They invite you to run the football and swarm to the football. Can they stop the run with that? Is Georgia’s offensive line good enough to catapult them to elite?

“I don’t think they’re elite up front and I think we’re going to get the answer to that question too.

Given how stout Georgia’s defense is, don’t expect Arkansas to rack up as many chunk yardage plays on first and second down as they did against previous opponents.

This means KJ Jefferson will be facing a lot of third-and-five type situations, where his intermediate passing game will need to be share for Arkansas to convert a high enough percentage of these.

Can the Arkansas quarterback throw well against a Georgia defense that can keep its safety back because its defensive line is handling the Hogs run?

It’s an issue the game may depend on.

“To me, that’s the biggest concern with KJ Jefferson, is throwing the go route or throwing a post down the middle of the field when the safety vacates,” Arkansas football great Clint Stoerner said. “I mean, hell, I’m 43 and can do that right now.”

“Especially when Treylon Burks is on the other end of it. Those are technically very low difficulty, if you will, from the quarterback position,” Stoerner said on the Buzz 103.7 FM.

“And those are all the things that I think the jury’s still out on KJ Jefferson. Nobody has forced them into a position where he has to do those things.”

“If it’s third and five, eight times in this game versus Georgia Bulldogs, what are you calling? You can’t throw a low percentage go route. If you hit one, good job, but it’s a low percentage. Odds are, you’re not going to convert.”

“You can’t run the football because it’s Georgia’s defense and they’re going to likely hold you to less than five yards on a rush. The jury’s still out on this part of it for Arkansas, but boy, the other pieces of that offense damn sure are good.”

Adding to the challenge is Georgia’s defense looks a lot like Arkansas’ “umbrella” defense — just with a lot more blue-chip players. The below QB Spotlight does a good job showing what KJ Jefferson can expect from the Bulldogs — and a strategy that may work best in attacked that defense in the situations Stoerner was talking about:

How to Watch Arkansas vs Georgia

WHERE: Sanford Stadium in Athens, Ga.

RADIO: Razorback Sports Network can be accessed through local FM and AM affiliates, via the Arkansas Razorbacks Gameday app, via the TuneIn app or on ArkansasRazorbacks.com. The Arkansas radio broadcast will be carried on satellite radio on XM Ch. 191.

TV: On ESPN. Click here to watch the game on your computer, phone, tablet, or another streaming device.

Notes for Arkansas vs Georgia

Arkansas is perfect through four games for the third time since 1990, after going 4-0 14 times from 1959-89. The Razorbacks have not gone 5-0 since 1998, Houston Nutt’s first year as head coach, and have reached that mark 13 times in program history.

The last time Arkansas was unbeaten after its fourth game and playing another unbeaten team was in 1977, when the No. 9 Hogs suffered their only loss of the year to No. 2 Texas, 13-9.