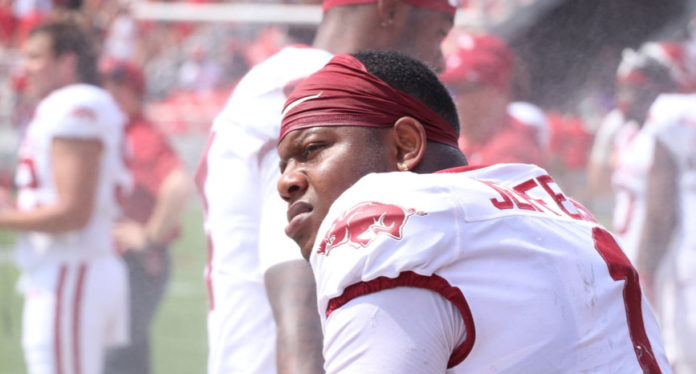 First things first: Arkansas is not nearly as bad as Saturday’s 37-0 loss to No. 2 Georgia made the Razorbacks look.

Now that the positive statement is out of the way, time to get to reality.

Offensive line, running back, defensive line, secondary, coaching, cheerleaders, guys handing out the water, people pulling cords away from feet, whatever. The Bulldogs were top notch in everything in Week 5. Just a handful of squads in FBS could have hung with Kirby Smart’s bunch inside Sanford Stadium.

“I don’t want to simplify this, but they just whipped us physically,” Sam Pittman said afterward. “It wasn’t guys in the backfield turned loose or anything like that. We just couldn’t block them.”

No shame for Arkansas, ranked No. 8 at the time, in losing. None at all. But there’s a catch: Arkansas entered the game 121st out of 130 FBS teams in penalty yards per game. The Hogs had been flagged for an average of 78.8 yards through four games. Saturday was even worse with 13 penalties for 100 yards.

Throw in the 25 yards lost on sacks, too, and the team had a net total of 37 yards of offense (Yes, not all the penalties came offensively; just making point).

The old adage that you can tell how a game’s going to go by the result of the first play held true. Unfortunately for Arkansas faithful, it was accurate through the first two. The Hogs were flagged for back-to-back false starts before even running a single play from scrimmage.

Fresh off a Georgia touchdown, KJ Jefferson and the offense had to get their first snap off from their own 7. The result?

Jefferson sacked for a loss of six.

Penalties killed Arkansas’ chances before Ricky Stromberg even flicked the ball backward to his quarterback. ESPN’s College Football Live announcers called out Arkansas players for looking visibly “rattled” by physically superior opponent on the road. (Though, really, who wouldn’t be rattled looking into the eyes of a fire-breathing 340-pound nose guard like Jordan Davis?)

What’s wildest, though, is that the 13 penalties were only tied for the most the Razorbacks had in a game this season. The 100 negative yards from those penalties is only second worst. The highs came against Rice in Week 1 and ultimately didn’t cost the Hogs anything but a small scare for the game’s first half-hour. Thing is, Rice plays in Conference USA.

Those kinds of numbers against SEC foes, Georgia or otherwise, are nothing short of damning.

Part of the reason Arkansas accrued so many flags had to do with the atmosphere. Sanford Stadium, even though it isn’t the most modern of venues, is still one of the most hostile in the country.

The two false starts that began the game came with Georgia’s student section immediately to the Hogs’ right. They were in the loudest part of one of the loudest stadiums in college football. Considering it was Arkansas’ first real road game of the season, some jitters were bound to happen.

But the penalties didn’t stop after that, even if the nerves settled.

With Arkansas trailing 14-0, a six-yard pass to Tyson Morris would have given the Hogs a 3rd-and-3, but an illegal man downfield penalty cancelled the play. On 2nd-and-13 instead, Treylon Burks caught a five-yard pass, then, on third down, Jefferson was taken down for a one-yard loss.

With Reid Bauer forced to punt from his end zone – thanks to the penalty and subsequent loss of yardage – Georgia blitzed the snap, blocked the punt and fell on the ball in the end zone, adding embarrassment to the already rough first Arkansas quarter.

On one play early in the fourth quarter, three different flags hit the field while Georgia was on offense. All three flags were Arkansas penalties. Georgia declined two and took the one that yielded the largest gain. Yes, the game was already well in-hand for the Bulldogs at that point, but even ESPN analyst Kirk Herbstreit, who called the broadcast, said he wasn’t sure he’d ever seen three penalties on the same team on the same play.

“Georgia was a hell of a lot better than us today,” Arkansas coach Sam Pittman said.

In the end, no matter how much you wish and pray, Arkansas simply isn’t big enough, fast enough and talented to compete with a team as big, strong, fast and talented as Georgia when that better team is trying hard.

In the last five years, Georgia has signed 23 5-star recruits and 73 4-stars.

As Wally Hall, the Arkansas Democrat-Gazette’s sports columnist, points out: “Dan Jackson, who blocked the punt for the Bulldogs that was recovered for a touchdown, is on special teams and he is a 5-star recruit.”

The Arkansas football program, meanwhile, has since the 1990s signed a total of five 5-star players.

This means that Arkansas’ ceiling is limited compared to what Georgia is able to do playing at even 85% or 90% of its potential.

Wally Hall puts it like this: “If Arkansas had played a perfect game it still wasn’t going to win.”

A bit sure, if you think Arkansas and Georgia (and Alabama) are on the same playing field. They are not. Fortunately, the the same goes with almost every other college football program.

Arkansas football fans, for the most part, don’t expect the Hogs to be able to beat Georgia and Alabama. But they are right to expect that the program should be good enough to knock off any other program.

They know the program is still charting an upward path from a 3-7 football team last year and 2-10 both seasons before that.

Arkansas’ self-imposed penalties from Saturday can’t happen again if the Hogs want to keep itself inside the Top 25. The Razorbacks travel to Ole Miss for Week 6 where Heisman Trophy favorite Matt Corral had the Rebels rolling before Alabama gave them the wire-brush treatment in Tuscaloosa on its way to building a 35-0 third-quarter victory.

Still, expect Ole Miss to be favored, especially after it outscored the Crimson Tide 21-14 in the second half of their 42-21 loss on Saturday afternoon.

It will be a close line, but Arkansas won’t be expected to win. It could, absolutely. The Hogs beat Ole Miss last year by picking off Corral six times. But Corral is a lot more poised this time around and he will not be intercepted near that number of times again.

He completed 21 of 29 passes against a salty Alabama defense which is still elite (even if it’s not at Georgia’s level).

Arkansas didn’t thrive as the underdog against Georgia, but does generally wear that mantle well. They weren’t favored against Texas or Texas A&M this season, either, and those turned.

But five games into the season the strengths and weaknesses aren’t outliers anymore.

After that, Auburn visits Fayetteville before a breather against Arkansas-Pine Bluff. The Razorbacks could go into that game against their cross-state opponent with either a magnificent 6-1 record, with the only loss coming to a likely College Football Playoff team or, worst-case, 4-3 with three straight losses.

While penalties and whether they’re cleaned up or not won’t be the only reason why either of those outcomes are the result, it could be enough to manipulate such records.

The last Arkansas team to start 4-0 was the 2003 bunch. Auburn handed the Hogs their first loss in Week 5. Florida made it two in Week 6. Ole Miss three in a row after Week 7 finished. The Razorbacks recovered to finish 8-4 in the regular season and won the Independence Bowl against Missouri.

But 2021 is different. It’s tougher. Quite a few Arkansas football fans will likely say “Heck, 8-4 would be awesome after what we’ve been through the last few years.” A few, however, would wonder what-could-have-been after a 4-0 start. An Independence Bowl trip might feel like a disappointment, much like it did after that 2003 season, even in retrospect.

Georgia was a loss. Losses happen. At least no key players got injured. Now, starting Monday, now is the time to see what Arkansas football is truly made of.

Saturday’s trip to Ole Miss will provide a good sign of how resilient these Hogs are.