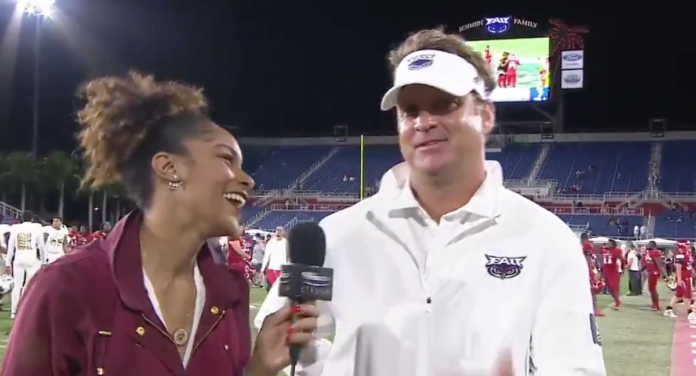 Even though the one-time boy wonder Lane Kiffin is now 44 years old, he still comes off as brash and youthful, whether deep sea fishing or arriving to coaches shows in style:

Oh, Lane. This is how you come to a coaches show. @RedditCFB @KevinOnCFB @larryblustein @paxton #FAU pic.twitter.com/1XO3osFFKx

In some ways, despite a few middle-age extra pounds, Kiffin seems younger than he did when a head coach for the Oakland Raiders, USC Trojans and Tennessee Volunteers. Back then, Kiffin was married to Layla Kiffin and starting a family that now includes three children.

But Kiffin’s divorce in 2016* transformed him into a fun-loving bachelor. This helps him bring “a little bit of swagger, a little bit of that Kliff Kingbury cool-guy attitude, an attitude very different from Mike Leach [who’s] going to bring some quirkiness,” Pig Trail Nation’s Alyssa Orange said.

“I think he excites players too. You gotta look at this sometimes from a player’s perspective, some guys like to play for guys like Lane Kiffin, they’re relatable.”

Certainly, Hunter Yurachek would put this in the list of positives when figuring out who to hire as Arkansas’ next head football coach.

There’s some potential downside too, however. “I look at him as a divorced version of Bobby Petrino — and divorced for a reason,” added Mike Irwin, the longtime Razorback analyst. Being a bachelor, in theory, could help prevent scandals if Kiffin enjoys having multiple girlfriends, and “you can do certain things that were obviously frowned upon around here with Petrino.”

Still, Irwin added, “I think that’s going to be an issue when they sit down and look at him. ‘Do we really want a young good looking coach who’s a bachelor hanging around on Dickson Street after games?'” Especially in the wake of Bret Bielema, who earlier in his Razorback tenure was known to frequent Dickson street establishments like Ben’s Apartment.

“There’s just some issues I think the people surrounding Hunter Yurachek would look at. I don’t know what Hunter himself would do. The story is that Yurachek was about to hire Lane Kiffin at Houston and the Board of Regents turned him down.”

Irwin added: “He’s good. He’s really good. He’s also been fired at a couple of places for a reason. And it wasn’t just the other thing I talked about… If he’s hired, I think it will generally be looked upon as a young dynamic coach coming in. And he can probably turn this around, especially offensively.”

“Too Much of a Wildcard”

The entire Pig Trail Nation team agrees Kiffin packs too much potential downside for Arkansas. “I think that Lane Kiffin is just too much of a wild card for Arkansas to be going after now,” Tera Talmadge said. “I don’t think they’re in the situation to hire a guy like him, knowing that they can’t really control him. They also are really keen on getting someone who’s going to stay here, and he’s proven that he doesn’t stay places very long. I don’t think that this would be a good fit for him.”

Watch these Hog insiders break Kiffin down at 16:07 below. They also discuss Mike Norvell at 13:15:

Plenty of other media, too, are serving up Lane Kiffin to Arkansas assessments.

“He’s going to help you on the offensive side and has a proven track record of success everywhere he’s gone,” said Phil Elson, co-host of “Halftime” on ESPN FM 95.3.

“Kiffin’s got a track record of one really good season at each school, but never been able to hold that for a lengthy period of time. And it’s the thing about Kiffin that that frightens me — it feels like you would be a hire that could be good, but could also just be spectacularly bad. Like it’s been at a few other places.”

Kiffin’s inability to stay more than a few years in one spot can be seen as a negative, but does Arkansas need its next coach to stay for a decade? Or does it simply need a coach who can swoop in and get the program back to respectability and regular bowl game contention in 3-4 years?

From there, perhaps, the next head coach can take it back to true national title contention.

“There’s so much criteria that you’re looking for with this opening for the Arkansas job,” Halftime co-host Tye Richardson said. First and foremost, the candidate needs to have the ability to rebuild a program (preferably with experience doing that at the Power 5 level).

Then, Yurachek likely wants the candidate to have experience:

“There are so many different levels, so many different checkpoints that Arkansas fans, the administration, Hunter Yurachek are looking for. You’re going to have to pick out a guy that doesn’t check every box and hope that his pros outweigh his cons or his unknowns.”

As for Kiffin, “I think he’s too immature though he’s probably matured a little bit,” Richardson said. “Maybe I’m wrong on that. I know he’s an offensive genius… you could look at Alabama in the [2018] national championship game against Clemson, how they were not the same football team when [Steve Sarkisian] took over and was the O.C. compared to when Kiffin was the O.C. that year.”

“But I think that is more of a luxury of coaching Alabama players than just being a coach in general. Not to diminish his coaching abilities altogether. I just don’t know if he has what it takes to be the head coach and to take over in Arkansas’ current situation.”

Did you know in 2007 Lane Kiffin was practically begging to be the Hogs head coach? And that Jeff Long’s decision came down to him vs. Bobby Petrino? Hear that story starting at the 19:32 mark below: