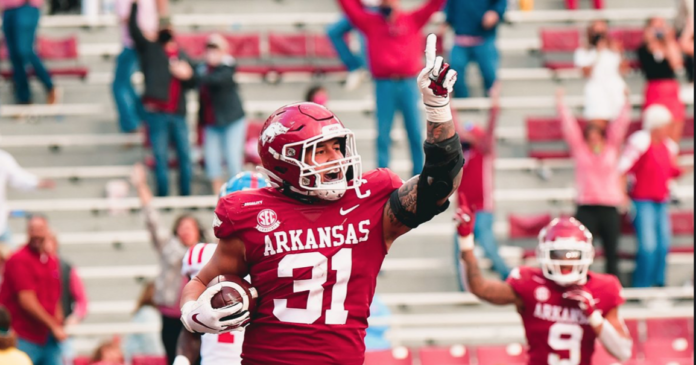 By now, the legend of Grant Morgan has grown wide and far.

The Arkansas senior linebacker had one of the greatest individual defensive performances in program history this past weekend against what had been a high-powered Ole Miss offense.

With right-hand man Bumper Pool out of action and Morgan playing injured, wearing a large arm brace, he finished with a career-high in tackles and an interception for the ages, earning the “one-armed bandit” nickname from teammates like Mike Woods.

In all, Morgan tallied 19 tackles (5 solo), a sack, 3 tackles for loss, 2 pass deflections (which both should have been interceptions), and a pick-six which halted the rallying Ole Miss offense and sealed the game for Arkansas.

Quarterback Feleipe Franks, said he was impressed Morgan could play through an elbow injury “Going out there playing his heart out for not only the Arkansas nation, the state, but also for his teammates, his coaches…. It shows resilience not only with him, but with our defense and our team. That was a really good job by him.”

So good, in fact, Morgan today was honored with an SEC co-defensive player of the week award. (He got some stiff competition from teammate Hudson Clark who picked off Ole Miss quarterback Matt Corral three times and had to settle for SEC Freshman of the Week.

My top performing players of WEEK 7:

National accolades have come to the Arkansas program as whole, too. Morgan’s effort, after all, was just one part of a masterful defensive effort overall, where the Hogs forced 7 turnovers( 6 interceptions and a fumble), had two stops on 4th & goal at the 1-yard line, and scored two touchdowns off of interceptions.

The stunning turnaround from the last two seasons is now four games in, and the college football writers at The Athletic have seen enough to believe Arkansas is very much the real deal.

In their last national rankings, they placed the Razorbacks at No. 15:

“Not only do the Hogs have more SEC wins this year (two) than the past three years combined (one), but they also played Georgia tough, leading at halftime, and probably should have beaten Auburn if a spike fumble was initially ruled correctly. In a season when teams look different from week to week, the Hogs have looked consistent and deserve that spot right now.”

Arkansas would be in the Top 10 right now if its offense were playing above average, but fortunately the defense bailed it out time and time again against Ole Miss.

“We really just spied the quarterback,” Grant Morgan said postgame. “We went a good amount of zone just because they haven’t faced a lot of zone this year. We simplified our defense because they go fast so we simplified our defense, we got lined up, and just played football and just read his eyes. Our coaches do a really good job of knowing what routes they’re going to run every single week and just knowing what tendencies they show, so we were just well prepared for this game. Our coaches just did a really good job.”

In a game dominated by the defense, Grant Morgan seemed to shine the brightest. He played the passing lanes well, leading to his interception and two deflections. He was also able to get to the ball quickly which resulted in him racking up a simply insane amount of tackles.

Morgan was also a bright spot in a run defense that was questionable at times, allowing Ole Miss to run for 242 yards. Every time Morgan was there to hit them behind the line, he put the defense in a great position. It forced the offense to pass the ball, which seemed to result in an interception more often than not.

Morgan was also big on 3rd down in this game. He was able to make plays when the defense needed them most.

He also broke up a pass on 3rd down and 10 in the 4th quarter. However, that effort wasn’t rewarded as Ole Miss ran a fake punt play to perfection on 4th down.

Arkansas would eventually win and that play does not seem as significant now, but at the time it was a massive play for Grant Morgan and the defense. Later in the 4th quarter, he came through with an even bigger and better play that would win Arkansas the game.

With Arkansas up by only five points, Morgan returned his interception to the house late, deflating all the momentum that Ole Miss had been building to that point. The Rebels had outscored Arkansas 21-6 to that point in the second half, and recorded touchdowns in their last two drives.

It felt as if the Heartbreak Hogs were about to make an appearance in Fayetteville when on the second play of the drive, Grant Morgan intercepted a pass Corral should have never thrown, then ran around his blockers and gave a fullback-caliber juke to blast past a Rebel and make his glorious house call in the endzone.

Watch Sam Pittman break down the play and explain how much it meant to him here:

Grant Morgan’s older brother, Drew Morgan, was every bit the warrior Grant is when Drew played for the Razorbacks a few years ago.

On Saturday afternoon, though, the 25-year-old was on babysitting duty, looking after his little sisters so his mom, stepdad, dad and stepmom could attend the game.

“I took one for the team,” Drew Morgan said on the Buzz 103.7 FM. “I was out there, I was sitting in my house. I was watching it and I was like all right. He almost had the first pick and I was [cursing] at the TV, “Catch the ball!”

“All by myself with these little girls around thinking, “Oh, no, here we go.” Then he picks the ball off and essentially puts the nail in the coffin. About 10 minutes after I blacked back in, and my sister goes, “I got that whole thing on recording.”

And yes, later Drew did his big brotherly duty and gave Grant a hard time for missing those earlier interceptions.

“I was like, “Dude, you had literally two other opportunities to take the ball and you waited until the last one.” He said, ‘The last one was the only one that needed to count.'”

Listen to the whole interview here: