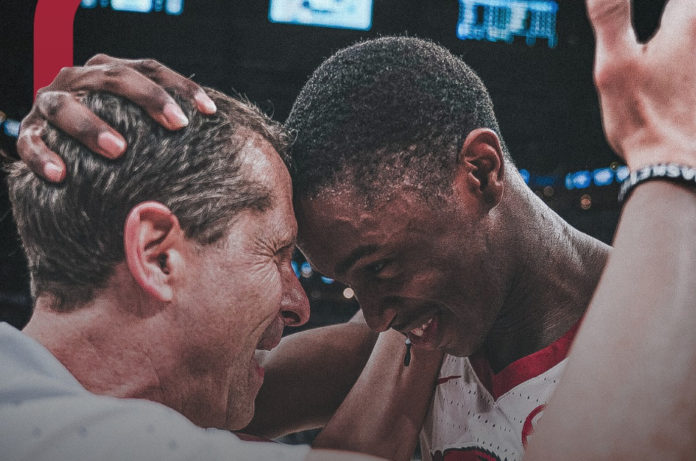 The 2020-21 Arkansas basketball season is finally, beautifully in the books. And it says a great deal that the anticipation it fostered for the 2021-22 season is already so pronounced.

The program experienced its deepest and most uplifting regular and postseason since the mid-1990s. This will unquestionably be the most hopeful offseason since that time, too.

Granted, belaboring the Baylor loss in the Elite 8 is a little pointless.

Yet Arkansas’s only really maddening trend all season–burying itself early with mistakes and sluggish play–came home to roost, and hard.

The Bears have such an electric backcourt that I found myself checking and rechecking the sizes of their guards, who seem to have the longest strides and quickest releases in the game.

Jared Butler and Davion Mitchell are a modest 6’3″ and 6’2″, respectively, but they felt so much bigger than the Hogs’ defenders.

So when you fall behind 29-11 against a team like Baylor, you’d better be able to shoot. For Arkansas, Moses Moody simply wasn’t in rhythm. And J.D. Notae went to the sideline with 15 minutes left, with a couple of his fouls being controversial.

The Hogs managed to get through three wins in the tourney without the three-ball. After making only 10 combined, the Hogs would need at least that many against Baylor to be in the game.

By night’s end, the Hogs had only canned three of their 11 attempts. That’s perhaps good discipline but the Hogs still need more consistent long-range threats on board for 2021-22.

If the below highlights are any indication, highly-touted Georgia guard Chance Moore (#3 on the white team) could provide that relief. The return of a healthy KK Robinson will also help.

Ethan Henderson’s decision to follow Desi Sills out of Fayetteville leaves another spot remaining to be occupied.

Moore, incidentally, could slide capably into the Moody role if the latter departs as expected for the NBA. He’s got a quick, aggressive first step, but he appears adept at staying beyond the arc and scoring from there off the bounce or the feed.

None of those guys were available against the eventual national champs from Waco, who simply throttled Houston and Gonzaga to claim the Bears’ first crown. At least Arkansas fought back furiously, pulling within within four on a couple of occasions, but Baylor had the weapons to author a response every time.

Mitchell, in particular, took flight for the Bears after being saddled with early foul trouble. Tate tried to steal a fourth foul on Baylor’s bullish guard early in the half but was hit with an offensive foul of his own.

That little play proved pivotal, too. In the second half, Mitchell erupted for 10 of his 12 points, and every one of them seemed to needle the Hogs’ balloon.

He drove by Moody, Tate, and even Devo Davis with regularity, and was adept at finding MaCio Teague or Butler on the wing if he wasn’t scoring himself.

The Hogs finished sixth in the final Coaches Poll, and probably had a case to be ranked higher. That would have seemed laughable when they got out of the gates at 2-4 in the SEC and looked pretty wobbly in the process.

Final polls, incidentally, are hard to figure: Arkansas was slotted behind Bama at 6, which makes sense given that the Tide won the SEC regular-season and conference titles. But the Hogs advanced farther, and ended up being the only team that genuinely challenged Baylor much late into the second half during the tourney.

Houston at No. 3, frankly, was a misstep too, and early signs show that Arkansas may again be “under-ranked” to start another March run in 11 months. Musselman seems entirely fine with the time-honored notion of playing the disrespect card to his and his team’s full advantage, though.

It’s fitting that in the Easter season, we’ve seen a full-scale resurrection of the Razorbacks’ basketball program. As Nolan Richardson mined the JUCOs productively in another era, Musselman now plays this new portal game masterfully.

He sees immediate value in the savvy of a Jalen Tate, the tenacity of a Justin Smith, and even the spot moments for Vance Jackson or Connor Vanover.

The 2021-22 roster is solidifying quickly. These newcomers are an exciting, eager-looking lot, too, thanks to the temerity and guts of the 2020-21 team.

Much love and thanks for that, gentlemen.

Your mark here is well made.