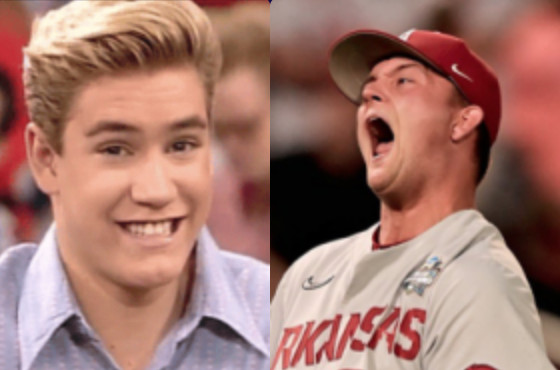 Morris, a 6-foot-3, 220-pound junior from Cabot pitched Monday against Ole Miss. He wasn’t good. Morris, who started, recorded just two outs while walking two, giving up two hits, throwing a wild pitch and hitting a batter. To say that Wednesday night was redemption would be something of an understatement.

Morris entered with Arkansas nursing a two-run lead in the bottom of the ninth, but the Rebels had the bases loaded with nobody out after Evan Taylor gave up a single on the first pitch of the inning and usual closer Brady Tygart plunked back-to-back hitters on consecutive pitches. Van Horn went to Preppy. Ok, so it wasn’t the actual “Saved by the Bell” version of Zack Morris, but by the time Arkansas’ version finished the job, Arkansas fans were smiling as widely as Mark-Paul Gosselaar’s most famous character.

Morris recorded a strikeout and a flyout before an infield single cut Arkansas’ lead to one. But Jacob Gonzalez, one of the handful of players who are considered as a potential No. 1 overall pick in the MLB Draft of 2023, lined out to left field to end things.

Arkansas’ 3-2 victory set up a win-or-go-home game against the Rebels on Thursday. The Razorbacks will throw their ace, righty Connor Noland, against Ole Miss’, Dylan DeLucia. When the two met on a Friday night during SEC play in April, DeLucia and the Rebels had the upper hand, winning, 4-2.

One More Game to Finals for Arkansas Baseball

But as big as Friday nights are in the best conference in college baseball, they’re nothing compared to a winner-take-all game for the right to play for the national championship at the College World Series. One of the two will get Oklahoma in a best-of-three set on the weekend after the Sooners eliminated Texas A&M earlier in the day Wednesday.

At this point, who would bet against the Razorbacks on being that team? Rhetorical. Don’t answer.

Ole Miss didn’t even get a runner into scoring position until after Tygart’s first beanball. The Rebels’ run to that point came off a Kemp Alderman solo home run in the second. It followed Chris Lanzilli’s solo shot the half-inning before. Brady Slavens went deep in the fifth to give Arkansas the lead and Michael Turner hit a single through the left side to provide the necessary insurance in the eighth.

Morris needed just 15 pitches to record his three outs, meaning he could be available Thursday. In fact, just about everyone except Hagen Smith and Evan Taylor, the two who worked the first eight innings Wednesday, will be set to go. Considering the magnitude of the game, those two could be, as well, though it’s unlikely as coach Dave Van Horn will need arms for a potential series against the Sooners in the College World Series finals.

Noland should get a leash, though not only because of a desire to save arms. The fifth-year senior from Greenwood who earlier in the week became just the fourth player in history to win a College World Series game and a college-football start at quarterback, has been Arkansas’ best and most consistent pitcher all year. A win to put his team in the finals would be a capital achievement for a player who has had to overcome injuries and Chad Morris in his career.

As for the charm, it’s deservedly been the Diamond Hogs’ since the SEC Tournament. The Michael Turner-Derek Ruscin saga seems to have been a catalyst to the Razorbacks’ heat in the NCAA Tournament. A loss to Oklahoma State in the Stillwater Regional was ultimately negligible and the Ole Miss loss from Monday has now been recouped. Other than those Sooners, no team in the last three weeks has played better than the Razorbacks.

Who knows, they may not need the luck come Thursday. They are, on paper, the better team than Ole Miss, having beaten them in three out of five games so far this season and finishing four games higher than the Rebels in the SEC standings. Heck, Ole Miss was the last team chosen for an at-large bid for the postseason.

At this point, it doesn’t matter how it happens. A horseshoe. A rabbit’s foot. A four-leaf clover. Zack Morris. Plain old baseball skill. Arkansas is a game from playing for a national championship.

See our latest on Arkansas vs Ole Miss here: