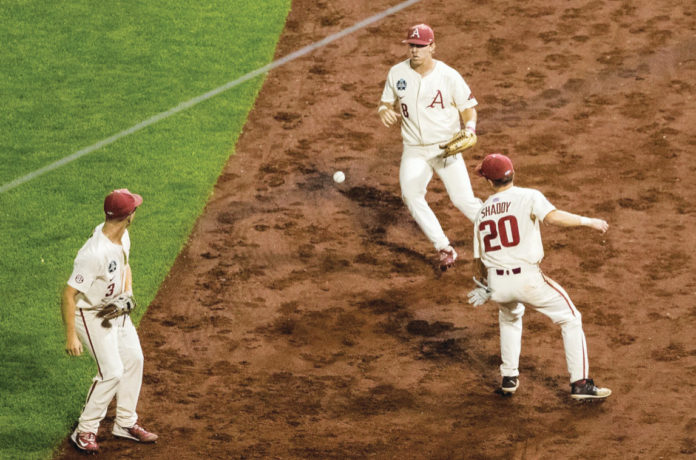 Razorback outfielder Jace Bohrofen is a former Oklahoma prep star who played a season for the Sooners before transferring to Arkansas. On Wednesday night, he made one of the biggest plays of Arkansas baseball’s postseason to help put Arkansas in a position to play his former team in the College World Series finals.

In the bottom of the ninth inning, with Arkansas clinging to 3-1 lead against Ole Miss but facing a loaded diamond, Rebel TJ McCants hit what at first appeared to be a harmless fly to left field. Both Bohrofen and Razorback star shortstop Jalen Battles came blazing over. Battles called for it, but Bohrofen called him off, and the two fielders kept hurtling toward each other.

The scene was in some ways similar to the most infamous play in Arkansas baseball history. In the ninth inning of Game 2 of the 2018 College World Series, with Arkansas up by one run and ahead in the series, Oregon State hit a pop fly foul that could have been caught by any one of three Arkansas outfielders.

Cadyn Grenier popped the ball high behind first base and toward the stands, as the Associated Press reported. “There was plenty of room to make the catch, and second baseman Carson Shaddy, first baseman Jared Gates and right fielder Eric Cole converged. No one took charge and the ball hit the ground.”

“I was running and didn’t hear anybody call it, and I overran it,” Shaddy said.

A caught ball would have meant a national championship. Instead, Arkansas ended up losing that game and the next one. Although it’s been four years, that play still haunts almost all true Arkansas baseball fans.

On Wednesday night, however, not one but two Razorbacks were doing everything they could to make sure another hugely important fly ball was caught. This time, Battles veered off at the last second to avoid a full-on collision and Bohrofen made the catch despite sustaining some contact from Battles:

Chris Lanzilli helped Arkansas advance to the final game before the finals. His three home runs in Omaha are the most by a Razorback ever. He is 7-16 with three bombs and seven DBIs in the College World Series.

Peyton Stovall finally cooled down a bit Wednesday. After five hits Tuesday, he had an 0-5 game. He is still 21-45 with home runs and 13 RBIs in the tournament.

Brady Slavens and Cayden Wallace were hitless Monday against the Rebels and each had a pair of hits Wednesday, along with Lanzilli. Slavens launched third home run of the tournament 436 feet dead center.

Braydon Webb and Michael Turner had the other two hits last night and are the only two with hits in both games against Ole Miss. Turner drove in the winning run in the eighth inning and is batting 9-18 with five RBIs in Omaha. He is batting 20-45 with two home runs and 16 RBIs in the whole tournament.

Webb is going for the leadoff cycle Thursday. He led off Monday with a triple, a single on Tuesday and a double last night to leadoff the game. He is 15-47 with a home run and six runs knocked in for the tournament, and 7-20 in Omaha.

Battles, Moore and Gregory went 0-8 Wednesday. It’s not all bad at the bottom of the order, since Battles had two hits against the Rebels Monday and Moore is 5-14 in Omaha. However, Gregory continues to struggle, going 2-15 in Omaha and 4-34 in the whole tournament.

For the Ole Miss offense, Kemp Alderman had three of the five hits yesterday, making him 5-11 with a home run and three RBIs in Omaha.

The 2-3-4 batters were 0-11 with five strikeouts in the contest. Gonzalez, Elko and Graham had a rough go Wednesday, but Graham is 5-13 with a home run and three RBIs at the World Series. Elko is just 2-12 with a home run and Gonzalez is 3-14. Elko is batting 11-30 with four home runs and 13 RBIs in the tournament, so it’s not been all bad for the man who once played with an ACL.

Justin Bench and Calvin Harris both have five hits as well in Omaha, tying Elko and Alderman for the team lead. Bench drove in the second run Wednesday and is 5-15 with three runs knocked in at the World Series. Harris was the hero of the game Monday with three hits including a home run and four RBIs. He is 5-10 overall in Omaha and 10-23 in the whole tournament.

Both teams will probably have their aces going Thursday in a sudden death, winner-take-all game with a trip to the College World Series Finals in the line. Neither of them ended the regular season how they wanted, but both have shown up for their team kn the postseason.

Connor Noland for Arkansas struggled to end the regular season but has been fantastic in three starts in the NCAA Tournament. Over 21.1 innings he has allowed just three runs on 18 hits and five walks with 11 strikeouts and picked up three victories.

Dylan DeLucia for Ole Miss also ended the regular season in a rough fashion and was not great in the Regionals. However in his last two starts, he has allowed just one run over 13.1 innings on eight hits, two walks and 19 strikeouts.

It seems likely to be a pitcher’s duel for at least the first five to seven innings. Both teams also pack a talented bullpen to back up their ace. Noland was extremely efficient against Stanford, only needing 67 pitchers to go into the eighth inning, so he may be able to last longer than DeLucia which could be the difference.

In the two World Series matchups already between these two, the Rebels won a dominant 13-5 game Monday and the Razorbacks won a gritty 3-2 game that came down to the last pitch.

On Wednesday, there were several moments in the 9th inning where it felt like the Heartbreak Hogs were going to make a return. Especially when there was a small collision between Jace Bohrofen and Jalen Battles in shallow left field as both were tracking a pop-up.

This time, the ball was caught and the Razorbacks pulled out the tough victory and have the momentum on their side going into Thursday. With that momentum, the 3-2 season series advantage and Connor Noland’s recent efficiency, the Razorbacks have the edge on Thursday. It will all be just enough for Arkansas to make it back to the College World Series Finals and right the wrongs of 2018 and the foul pop-up heard round the world.

How to Watch Arkansas vs Ole Miss

Braden Sarver contributed to this article