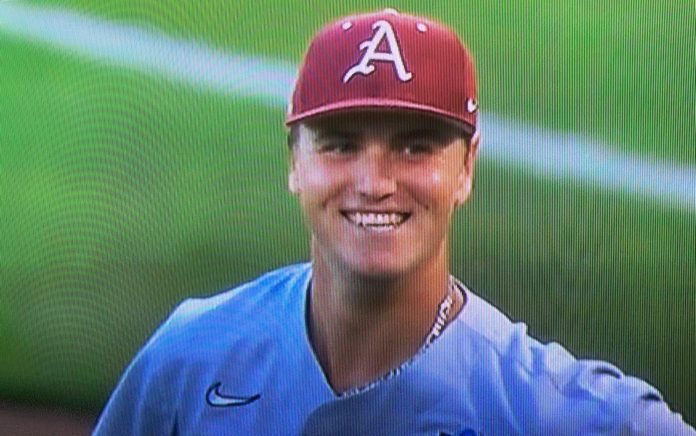 In February, when Arkansas baseball entered the season in the Top 10 in the country in just about every preseason poll, little attention was paid to sophomore right-hander Will McEntire. Even by late April, McEntire was hardly drawing special kudos. The Bryant native was solid but unspectacular in midweek starts against Arkansas-Pine Bluff and Arkansas State.

But by the end of the season, Arkansas baseball coach Dave Van Horn had come to lean on McEntire more than any other pitcher on the roster, arguably, other than fifth-year senior Connor Noland.

It was no surprise, then, that Van Horn, facing elimination, handed the ball to the 6-foot-2, 225-pound sophomore on Tuesday night. With Hagen Smith, the Saturday starter for most of the year, largely moved to the bullpen and Jaxon Wiggins, the Sunday starter, pitching the night before out of the pen, McEntire wasn’t just the easy choice. He was the right choice.

Whether you want to call him “Will The Thrill” like Arkansas basketball coach Eric Musselman did or “Mac Daddy,” the name he’s drawn at various points through the year, either is applicable. All he did against Auburn was strike out six in a row, carry a no-hitter to the fourth inning and ultimately give up just one run on three hits with one walk and nine strikeouts in Arkansas’ 11-1 win.

In the big picture, the win puts Arkansas just two wins away from making its third College World Series Finals appearance in program history. It also marks the Hogs’ 45th win of the season and a benchmark of excellence that no other college baseball team can match over the last five completed seasons:

Think about this: Every year, one program walks away with a College World Series title, but not a single other team over the last five full seasons has won at the same consistently high level as Arkansas. The latter is a far more exclusive club than the former. Yes, winning a national title is the most prestigious accomplishment in college baseball but, given the numbers, it’s no stretch to say that winning 45 games for five straight seasons is harder to achieve than winning a single CWS title.

If that isn’t a testament to the constant hard work of Dave Van Horn and his staff, as well as their talented players, nothing is.

On an individual level, McEntire was superb. His nine strikeouts tied the school record for second-most at the College World Series in history. More importantly, he gave a bulk of the night off for a bullpen that used seven pitchers the night before in a loss to Ole Miss. Now, Van Horn has options against the Rebels for Wednesday’s elimination game.

Just as important was the Arkansas lineup getting back to doing the things it was doing in the Stillwater Regional and Chapel Hill Super Regional. Van Horn swapped usual No. 2 hitter Brady Slavens with usual No. 8 hitter Peyton Stovall and it paid dividends. Stovall went 5 for 6 with a double, three RBIs and two runs. In fact, all of Arkansas’ No. 1 through 6 hitters were on fire as they combined to go 16 or 31 with two walks, five doubles, a home run, 11 RBIs and 10 runs.

Those so-called rental players, catcher Michael Turner and outfielder Chris Lanzilli, were especially good. They combined for six hits, six RBIs and four runs hitting back-to-back from the clean-up spot and the five-hole.

McEntire is no rental. He’s from the same high school as the last true ace to pitch for Arkansas in the College World Series, Blaine Knight. McEntire is a bit thicker and likely won’t be a top-three round pick like the skinny Knight (who, by the way, is in Triple-A ball for Baltimore already). But he could go down in history just as famously. McEntire didn’t give up his first run until the seventh when Bobby Pierce took him deep to left for a solo home run.

But at that point, whatever. Arkansas was ahead by eight runs instead of nine. It was a dominant win that proved the Razorbacks are closer to Ole Miss and Oklahoma, the teams on the other side of the bracket that started 2-0 in Omaha, than to any of the eliminated teams. There’s no reason to think the Diamond Hogs can’t win two games in a row against the Rebels now to make it to the three-game championship series on the weekend.

After all, Ole Miss took the first game of the three-game regular-season set in Fayetteville before Arkansas won the next two. And the Rebels can’t lean on their star freshman, Hunter Elliott, either after he threw 100 pitches in the teams’ meeting on Monday night. On Wednesday night, they will face John Gaddis and on Thursday likely bat against Dylan DeLucia. DeLucia threw seven innings of two-run ball with nine strikeouts against the Razorbacks in the Rebels’ lone win late April at Baum-Walker Stadium.

Arkansas’ lineup that night looked little like it has lately, though. Cayden Wallace was still batting lead-off. Jace Bohrofen started in right field. Robert Moore was fighting through his slump while hitting from the clean-up spot. None of that is the same. And if you think lineup orders are largely irrelevant, think again. Stovall’s night Tuesday was testament.

Certainly, the Razorbacks will need a bit of magic to make the national championship series. Beating a team as hot as Ole Miss – the Rebels haven’t lost in the NCAA Tournament yet – is no small task. But it’s a guarantee Van Horn will pull out all the stops to try to make it happen.

“Don’t be surprised if Hagen Smith is the starter” on Wednesday night, Razorback reporter Otis Kirk Tweeted. “He had an outstanding game against Ole Miss on April 30 at Baum-Walker Stadium. The Hogs beat Ole Miss and Elliott, who was Monday night’s starter. Smith pitched six innings that night allowing 7 hits, 2 runs 2 walks 8 Ks.”

McEntire is almost certainly likely to pitch again if the Razorbacks force a loser-goes-home Thursday night in a close one. Noland, too, and perhaps even sooner.

And it’s all because of what McEntire gave Tuesday.

“Whenever you get a four-pitch mix like that and you throw them all for strikes, that’s a really good gameplan.” – Michael Turner on McEntire

“We don’t wanna go home. We think we can play five days in a row. We like it.” -Van Horn on facing elimination

Van Horn on Peyton Stovall: “He had unrealistic expectations of him…He just felt a lot of pressure…Boy, he has been really good the last month…We’ve really been able to see the future this last month. It’s been fun.”

In the matchup on Monday, the Rebel offense was led by Justin Bench and Calvin Harris. Bench was 4-6 with two RBIs and scored four times. Harris went 3-4 with a home run and four RBIs. For the NCAA Tournament, Bench is 12-34 with five RBIs and Harris is 10-21 with a home run and six RBIs.

For the rest of the preview, go here: