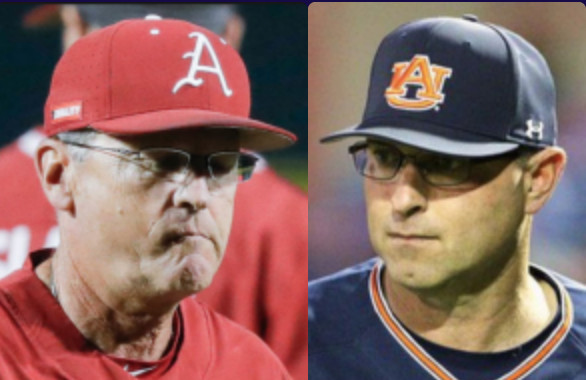 Omaha, Nebraska – it’ll get ya.

The hole the Arkansas baseball team has to dig out of in the 2022 College World Series is a large one. The Razorbacks fell Monday night to Ole Miss, a team they not only beat two out of three times during the regular season but also a team that was quite literally the last selected as an at-large team for the NCAA Tournament, 13-5.

From the word go, the Diamond Hogs were behind the eight-ball. Ole Miss scored two runs in each of the first three innings then added another four in the fifth showing the biggest bugaboo Arkansas baseball had entering the season was still buzzing in the background.

Arkansas’ pitching was supposed to be its weakness this year. For a bulk of the season, it wasn’t. At least, not on paper. The Razorbacks were second in the SEC in earned-run average and strikeouts and third in the best baseball conference in the land when it came to opponents’ batting average. But on Monday, coach Dave Van Horn had to go seven pitchers, only one of whom managed to work more than 1 2/3 innings. “We just didn’t pitch very well,” Van Horn said afterward. “ You’ve gotta give credit to [Ole Miss pitcher] Hunter Elliott, he did.”

“We were terrific tonight,” Ole Miss baseball coach Mike Bianco added. “Just really played well, and it starts on the mound…Not to take anything away from Arkansas, but he [Elliott] shouldn’t have given up a run today.”

Ouch. The good news for Arkansas is that most of their pitchers should be available on Tuesday night against Auburn in a win-or-go-home game. The bad news is, of course, it’s a win-or-go-home game. The winner of that game would have to beat Ole Miss two times in a row to make the national championship series. Those games would be Wednesday and Thursday (if necessary). That would make four games in four days for the Razorbacks. If they were to beat Auburn at all, that is. By that point, the Arkansas arms would be exhausted, no matter what else happens.

In reality, it was the first true disappointment the team has had in two weeks. They lost to Oklahoma State in a game in the Stillwater Regional, but that loss didn’t feel as damning as Monday’s. That said, the Cowboys put up 14 runs in that win and the very next night, the Razorbacks bounced back by allowing just three OSU runs in a 7-3 win that clinched a spot in the Super Regionals.

So, no, glass-half-empty crowd, it isn’t over yet. In that game, Zebulon Vermillion and Hagen Smith finished off the final three innings and held off a late Pokes charge. Both of those arms are almost assured to go Tuesday against the Tigers.

But it isn’t just the Arkansas staff that needs to play a bit better. The lineup wasn’t terrible against Ole Miss, but it certainly could have been better. The Diamond Hogs scored their five runs on eight hits and two walks. Not exactly the stuff of legend. Arkansas’ No. 2 through 5 hitters went a combined 1-for-14 against the Rebels. Michael Turner, from the 4-hole, had the only knock and it came in the first inning.

They can. Arkansas has a lineup that had 13 hits in every single game against Auburn during the regular season. Rare is the opposition that can hold down Cayden Wallace, Brady Slavens and Chris Lanzilli all at the same time. That crew going cold for two straight games? Practically unheard of. Expect at least one of them to give the Razorbacks a chance on Tuesday.

Still, it has to sting a bit for Arkansas baseball fans. In the modern era of college baseball, only Florida State, North Carolina and Clemson have more College World Series appearances without a title than the Razorbacks. That isn’t to say Arkansas can’t still win one, but the hole is deep. Ole Miss not only scored 13 runs, but they could have had more having left 13 runners on-base.

Looking Ahead to Arkansas vs Auburn

Arkansas is likely to see Mason Barnett on the bump Tuesday. They rattled him a bit in the first meeting, chasing him after four innings in an 11-8 win. Most of the damage done that day against the Tigers came against relievers Carson Skipper and Konner Copeland. In the regular season Arkansas vs Auburn, the Razorbacks lineup scored nine runs in two innings off those two. Skipper went four innings in the opener against Ole Miss and could give the Tigers a few innings, but Copeland hasn’t pitched yet for the Tigers.

As such, even with Monday’s result, the Diamond Hogs should have positive vibes heading into Tuesday. They haven’t done what’s expected for most of the year, so Tuesday should be no different. A win against Auburn would force a rematch against the Rebels and at that point, who knows what could happen.

See our latest on Arkansas vs Auburn here: