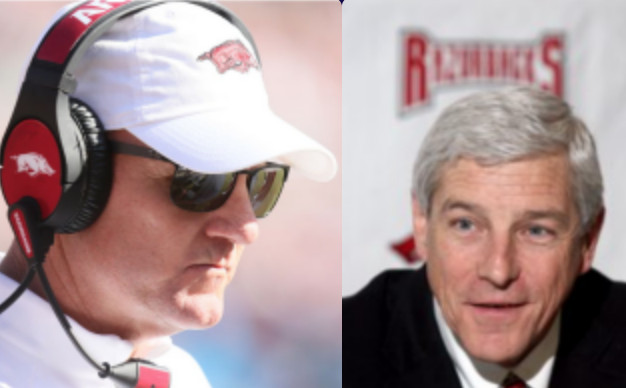 On the surface, there should be no need to remind the general public to wear seat belts. The reasoning seems blatantly obvious. Yet, all the same, there has been and will be no shortage of “Buckle Up” PSAs till the end of days.

Similarly, at first blush, Arkansas football fans need no reminder of how bad the Chad Morris disaster was. Those days are, finally, firmly in the rear view mirror. But the lessons to be taken away from an era that feels like a collective nightmare more than reality aren’t going anywhere. And it’s useful to get some perspective every once in a while from those on the outside to get a clearer understanding of how bad things really were.

Turns out, yes, Morris really was that bad. He takes the cake with the No. 1 spot for worst hire. More surprising, however, is that Morris wasn’t the only ex Razorback to make the list. If you include all athletic officials, three former Razorbacks are involved in four of the hires on the infamous list. They include Chad Morris and Jeff Long (who hired Les Miles at Kansas a few years after he had left his job as athletic director at Arkansas).

The other coach, though, will raise some eyebrows.

Just weeks after Bobby Petrino came to the Arkansas football program from the Atlanta Falcons in late 2007, he hired Ellis Johnson as his defensive coordinator.

Johnson, then 56 years old, had spent four years as the defensive coordinator of Mississippi State and had strong credentials as a former DC at Alabama and Southern Miss, as well as a head coaching stint at The Citadel. Ellis Johnson lasted only three weeks as an Arkansas football coach before it was announced that, actually, he was headed to South Carolina to coach under Steve Spurrier instead.

Spurrier hired him away because one of his coaches was returning to the same NFL staff that Petrino had helmed just a couple months before. Johnson was to replace Brian VanGorder, who only stayed South Carolina for a brief stint. “Spurrier said VanGorder came to him Thursday morning and said he would be returning to the Atlanta Falcons as defensive coordinator,” according to the Arkansas Democrat-Gazette. “VanGorder was linebackers coach for the troubled Atlanta Falcons this season.”

“Ellis Johnson has resigned as defensive coordinator,” Petrino said on January 24, 2008. “I spoke with Coach Johnson this morning and he felt like this is the best decision for his family. I certainly understand that. He and his wife are both from South Carolina and many of their relatives still reside in the state. I wish Coach Johnson and his family the best.”

Remember, all of this happened just eight months after Dana Altman had walked away from being the Razorback basketball head coach after a mere day on the job. No doubt, Arkansas fans weren’t feeling the same level of love from highly-regarded coaches then that they are in the current era where the football program is one of only eight FBS teams with both coordinators (Kendal Briles and Barry Odom) returning for a third consecutive season.

In 2012, after a successful stint at South Carolina, Ellis Johnson was hired as the coach at Southern Miss.

While Arkansas fans will never admit that a head coaching hire could have been worse than Chad Morris, they have to tip their hat to the kind of destruction Johnson unleashed on the Golden Eagles program in a single season. While Morris arrived to an Arkansas football program that had already been sinking under Bret Bielema, Johnson arrived in 2012 to take over a Southern Miss team that was ascending.

Prior to Johnson’s tenure, the Southern Miss football team had recorded eighteen straight winning seasons and been to ten consecutive postseason bowl appearances. In 2011, under Larry Fedora, the Golden Eagles won a school record 12 games and finished in the Top 20 of both major polls after a victory in the 2011 Hawaii Bowl. But that success helped Fedora land a job at North Carolina, opening the door for Johnson to waltz in.

“They would argue in Hattiesburg they still haven’t recovered,” Josh Pate said. “They really have not gotten back to the heights that they were at right before Ellis Johnson got there.”

With Chad Morris, it’s a different story. Not only has Arkansas gotten back to where the program was during the height of the Bret Bielema era, but it’s surpassed that. In the coming years, it looks like it’s on a trajectory to at least match the double-digit win seasons under Petrino.

That gives the smoldering black mark that is “2018-2019” in the Razorback record books a silver lining it would otherwise lack.

“This was a dark, dark time in the annals of Razorback football history,” Pate said. “It’s something they’ve tried to forget; however, you’ve got to give them credit. If you’re sitting there in Fort Smith tonight and you’re watching, if I were to ask you, “Would you change the past, given what you have now?” I don’t think they would. Given what they have now. It’s easy to say now that you’ve got the benefit of hindsight and you know that going through that led you to Sam Pittman, which leads you to what you’re going to put on the field this year and beyond. But, boy, it was tough.”

“I went to the Arkansas/A&M game last year, and it was just a regular season game. They beat A&M and those players were on the field crying. It wouldn’t have made sense to a casual, but when you realized that a lot of those seniors had been around for Colorado State, North Texas, Vandy, San Jose State, and Western Kentucky [not to mention the horror of almost losing to Portland State], and all of a sudden they’re beating ranked teams, all of a sudden they’re beating teams they had no business even competing against a couple years ago, then you realize the origins of those tears.”

While Morris did get the No. 1 spot on this worst hires list, Willie Taggart at Florida State got No. 2. Check out Josh Pate’s entire breakdown below:

Try this on for a coincidence – both Morris and Johnson served time as coordinators at Clemson before their arrivals in Fayetteville. Morris, of course, had been on the offensive side while Johnson supervised the defense.

Immediately after Arkansas, both went to the place that apparently welcomes failed head coaches with open arms: Auburn. Johnson lasted two seasons as defensive coordinator on the Plains, but he did call the most famous college football play this century – the “Kick Six” return that gave Auburn a win over Alabama in the 2013 Iron Bowl.

Chad Morris, meanwhile, lasted only one season as offensive coordinator at Auburn before getting fired not long after his friend Gus Malzahn. In his time there, he has nothing quite so redeeming as the “Kick Six” to his name. Morris now coaches high school football in Texas. The 53-year-old now spends approximately 1.5 hours a day in the pose you see below pondering what happened to his college coaching career.