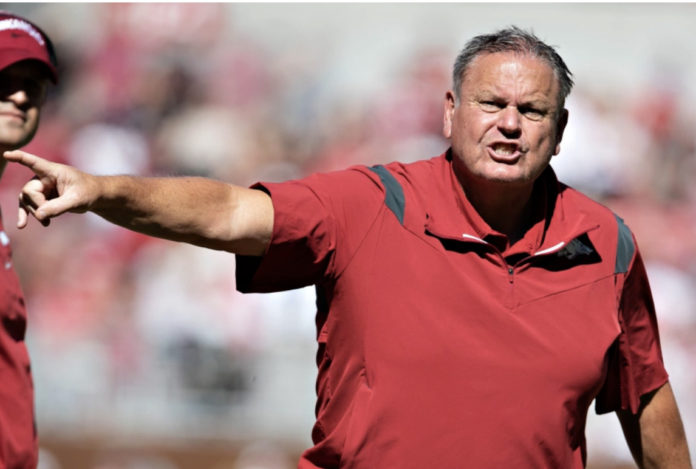 Ah, the good old fashioned 4-3 defense, a staple of the 1990s and early 2000s. Look for it nowadays in the game of college football and it’s like trying to find a five-star basketball recruit in the state of Arkansas: it’s there, but it’s rare.

The state’s flagship university hasn’t really run it in more than 10 years. The Bobby Petrino days with Jerry Franklin and Alonzo Highsmith played largely with just two linebackers (admittedly, Jerico Nelson was a bit of a safety/linebacker hybrid). Bret Bielema’s teams had Martrell Speight and Brooks Ellis, then Ellis and Dre Greenlaw, then Greenlaw and De’Jon Harris. Even last year, when Arkansas had its best trio of linebackers in ages, the Razorbacks almost never put Grant Morgan, Bumper Pool and Hayden Henry on the field together at the same time.

The game has simply changed. Passing is how most teams in the sport bake their bread. Defenses have countered by swapping out a linebacker – or defensive lineman (or both) – for another defensive back, someone who is fleet of foot enough to defend receivers, whether they be of the wide variety or the slimmer tight ends and running backs who may come from the middle of the field.

Arkansas in 2021 regularly dropped eight players into coverage. Part of it was necessity. The Hogs lacked depth both on the defensive line and at linebacker last year. The aforementioned trio excelled at the linebacker position, certainly, but the cupboard was relatively bare behind them. Up front, Arkansas relied on another trio, all transfers, to fill in three of the four spots on the defensive line.

Part of the reason why the Razorbacks regularly played “drop 8” coverage, though, was because of opposing defenses. Mississippi State, Alabama and Ole Miss – three of Arkansas’ SEC West foes – all finished in the Top 25 in FBS in yards passing. The Hogs sacrificed a pass rush in hopes of limiting those teams, and others like them, through the air. The results were mixed. Two of Arkansas’ four losses came to the Crimson Tide and Rebels. The Hogs beat MSU by just three points.

Better defense against the pass is a priority for coach Sam Pittman and defensive coordinator Barry Odom going into 2022. Arkansas certainly wasn’t awful against the pass last year: it ranked 41st in FBS in yards passing allowed per game, giving up an average of 213.8 each time out. Four Razorbacks opponents, however, threw for more than 280 yards. Arkansas lost three of those games. Those were the games where Arkansas’ “bend but don’t break” philosophy, born of such necessity, had a lot of fans wanting to break but not bend the nearest piece of furniture.

Granted, Pittman and Odom would prefer to drop 8 less often if the personnel will allow for it. The pass rush was almost non-existent, collecting just 25 sacks, 80th in FBS.

The good news is the head coach thinks the Hogs won’t have to play such preventative (note: not prevent) defense next year. That’s a result of Barry Odom’s experience with his players heading into Year Three of the Pittman era and Arkansas’ better players in both the secondary and up front. At least, that’s the hope.

“I think the better athlete we can continue to develop, including the corners, because right now the drop eight doesn’t have to be drop eight all the time or 75% of the time if you have some covered corners,” Pittman said on Brandon Marcello’s College Football Daily podcast.

Arkansas’ best cornerback last year, Montaric Brown, elected to forego a final season with the Hogs. Starting nickel back Greg Brooks Jr. and strong safety Joe Foucha are also gone, off to LSU to play for their home-state Tigers. In their stead come Latavious Brini from Georgia, Dwight McGlothern from LSU and a healthy Jalen Catalon. The All-American safety didn’t play last year after game six against the Rebels, lost for the season with a shoulder injury.

Barry Odom’s pretty high on the newcomers. “They’ve both got real game experience in the arena of playing SEC ball,” he recently said of Brini and McGlothern. “They’re talented. They’ve got a high football IQ. They’re gonna make our team better. They’re gonna make her defense better. And credit to our team on welcoming them with open arms.”

Growth is expected from Myles Slusher, Simeon Blair, Jayden Johnson and Malik Chavis, as well. Throw in starting cornerback LaDarrius Bishop and part-time starter Hudson Clark and Arkansas’ secondary might very well be the strength of the team on that side of the ball.

All those options will allow a more complex approach in the front of the defense, potentially leading to more sacks and, at worst, more pressure on opposing quarterbacks.

“We feel like we’re headed in that direction,”  Pittman added, “not with one and two, but maybe as many as four to five that we feel like we can put out there and bring a linebacker, bring in a fourth guy, bring a fifth guy, and play some man cover behind it.”

The Hogs were almost forced to play drop 8 more often than they wanted last year, playing in tight games against five straight SEC opponents (Ole Miss, Auburn, Mississippi State, LSU and Alabama). The thinking is passing beats teams faster than running does and so it’s more important to slow it down, force teams to get yards in front of defenders if they can complete a pass against those eight players in coverage at all. The sacrifice is the lack of pressure.

Blair, Slusher, Johnson and Chavis all improved as the year went on, which allowed Arkansas to be a bit more creative up front deeper into the season, especially against Missouri and Penn State in the final two games of the year.

“Towards the latter part of the year, we blitzed a little bit more,” Pittman said. “Our big deal is we weren’t getting the offense behind the sticks on first down. And we were much better this year than we were last year, but we got a long way to go there.”

During spring ball, however, Barry Odom has seen that path shorten. “We’ve done a number of different things pressure-wise, and we’ve got a whole another package coming next week,” he said during Saturday’s press conference. “We’re calling a number of things now to get them on tape to be able to understand, and then it’s also to find out who is our best blitzer. Who is our four-down look? Who is the maybe the best edge rusher? Can we get him singled up on a one-on-one block?”

“So we’ve thrown a lot at them. And I think this is the first time since I’ve been here that we’ve been able to do that because it’s the returners that we have. They understand what we have called previously, and now we have the ability to build on that. It makes it pretty exciting.”

Offensive coordinators don’t take from the past for the sake of sentiment. Even as some teams (like Arkansas) seem to pivot from pass-first and ramp up their running attacks, nobody expects the traditional I-formation of split-back offenses of yore to come back into style soon. Arkansas, like every other team in the sport, must adjust accordingly to defend the offensive schemes coming around the corner. But at least now, Odom doesn’t have to bend his schemes into more preventative molds due to personnel shortages.

For the first time in a long while, it appears the Arkansas football program has the bodies to field an upper-tier SEC secondary.

“I think Malik Chavis can play every spot we have on the back end. I really do. He’s that skilled athletically. I think we’re trying to find his best spot and it may be corner but also I know if we had an injury or something at one of the safety spots, Malik could step in today because he’s played it before, and he could go step in and hopefully not miss a beat.”

“Same thing with (Myles) Slusher. I think he can play either of the corner spots, any of the safety spots and the nickel position. That’s hard to do. There’s not many guys that can do that, in my opinion, at the level that he’s doing it. So a lot of that goes into, you know, staff time talking about how do we get the best 11 on the field. And then you find, well, what’s the best backup in that spot? It’s always roster management. And getting your best pieces in the right spots.”

“Khari (Johnson) he struggled the first two days that he was at safety just because it was so new. He had been at corner and normally just one side of the field and we moved him to one of the middle safety spots. He’s looking, he’s like, oh my goodness, there’s so much space out here. But today he had his best day. So I’m excited about him being able to do that and also being able to maybe next week going to get some snaps again at corner. I think this makes us better a lot more versatile if we have the ability to move some guys around.”

The secondary includes McGlothern and Chavis at cornerback along with Hudson Clark and LaDarrius Bishop among others. Currently, Myles Slusher, Brini, Khari Johnson, Jalen Catalon, Jayden Johnson, Simeon Blair and among those at the safety and nickel spots.