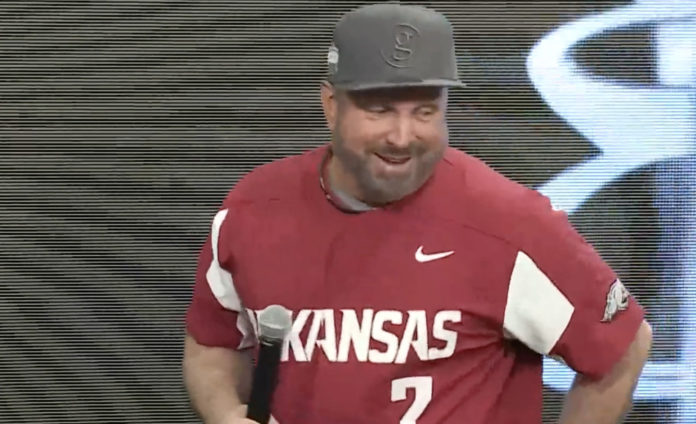 The Poyen, Ark. native has bled the Cardinal red his whole life, owns a tour bus with 17 TVs called the “Razorback,” and, back in 2009, made sure that a Razorback hat appeared early on in his first hit music video.

If you have any doubts about Justin Moore’s depth of commitment to the Hogs, let the following story smash them to pieces:

“My wife is from Louisiana, so all of her family is obviously LSU fans. I worked on her first and got her converted when we first started dating. When our first daughter was born my in-laws bought her an LSU outfit and right in front of them I threw it in the trash. In the South, none of that stuff is a joke, that’s for real. I went to Baton Rouge when we beat the crap out of them a couple of weeks ago. That was pretty fun to rub that in their face. As a matter of fact, I had my father in-law, my brother in-law and nephew on the Razorback side wearing red—so I felt pretty good about myself.”

Who would qualify as the second-biggest Razorback fan among music stars is up for debate, however. This weekend, the man who sings “Callin’ Baton Rouge” practically threw his hat in the ring for the honor.

On Saturday night, country legend Garth Brooks performed at Reynolds Razorback Stadium in front of a crowd expected have reached nearly 80,000 – the largest single musical performance ever hosted in the state of Arkansas. The Tulsa native had performed in the state a few times before, but never with this direct of a connection to the Arkansas football program. And never with this level of anticipation, which had been further stoked by pent-up demand coming out of a pandemic.

“I need a break from all the separation,” Brooks told 40/29 News on Friday. “I need to get together. So that’s what I came here for.”

He sure promoted the Hogs, too, to help that communal love reach a higher level. Here’s the largest Hog call you’ll probably ever see:

For Brooks, though, it was natural fit given the fact his late mother hailed from northwest Arkansas. “You love playing here probably more than anywhere else just because you feel like you’re playing at home,” he told 40/29 News.

“How many times do you get to play for people you grew up with?,” he told THV11. “My mom’s from Marshall. We’re all going to meet and save, all the guys from Tulsa and Stillwater are going to come over as well. This should be fun, because this is going to be nothing more than opening your case, take out your guitar and playing for all your friends and family.”

Saturday night’s concert brought together all kinds of people across different generations. Razorback basketball player Kamani Johnson, for example, said it was the first country concert he ever attended. Johnson, who is friends with Drake, added that he had a blast:

While Brooks, naturally, has also played at Neyland Stadium and repped the Tennessee Volunteers given his Nashville music ties, that area of the country isn’t truly home to him. This weekend, he’s ready to cast aside all affiliations with other teams and go all Hog.

The 60-year-old Garth Brooks told THV11 that he grew up surrounded by Razorback sports whenever he visited his mother’s family. “We were all raised with great knowledge [of Arkansas sports]. As kids, you always saw Arkansas on every sporting event on the TV and the stereo. Now, even today, when you watch, everything’s the best when they’re at home.”

On Friday during the concert setup, Brooks tossed out a #WPS on Twitter, wore a Razorback baseball jersey and even got to perfect his Hog call with the help of some media members. “Oh, I am going to use that like you won’t believe it,” he said in the below video:

While Garth Brooks hasn’t been a diehard Razorback fan his whole life like Justin Moore, now’s a great time to hop aboard.

Some would question whether that’s possible given his Oklahoma State ties. Brooks, after all, graduated from Oklahoma State and was a javelin thrower for the Cowboys. He’s still involved with his alma mater, helping out with a mentorship program for students. But Brooks’ ties to Oklahoma State shouldn’t prevent a growing connection to the Razorbacks.

It’s possible to juggle both allegiances. The most beloved current Razorback, for instance, was also born in east Oklahoma. He, too, grew up as a big fan of a major Oklahoma sports program. And he kept those ties late into adulthood. But Sam Pittman’s ties to the Sooners didn’t prevent him from becoming an adopted Arkansan. The same goes for Garth Brooks’ connection to Oklahoma State.

Next Biggest Crowd for Arkansas Football

After the Garth Brooks concert, the next biggest crowd at Razorback Reynolds Stadium will come during football season. The season opener vs Cincinnati may be close to a sellout, but a surefire sellout will be the Oct. 1 match-up with the Alabama Crimson Tide.

Alabama will almost certainly roll into town as a highly-ranked team gunning for yet another national championship, while Arkansas will seek to beat the Crimson Tide for the first time since 2006. Josh Pate, the 247Sports football analyst, ranks that game as the second most-likely road loss for Alabama in 2022, just behind a game at Tennessee a couple weeks later.

“Remember when Texas went in there last year? You remember what that place looked like? Did it look like anyone was going in there and winning that night?,” Pate says. “Bama’s going to deal with all that and then some this year. Now it will not be because this schedule has tripped Alabama up. If this upset happens, it’ll just be because Arkansas’s beat them. Because Bama in order has Utah State at Texas, LA Monroe and Vanderbilt in the four weeks leading up to this game at Arkansas.”

Snoop Dogg is a fan of a lot of programs, but he does seem to have reserved some special love for the Hogs (or maybe that’s just great marketing on his part):

Dolly Parton, a Tennessee native, knows how to bust out that Razorbacks love.

PS: Years ago, in Little Rock, I worked with the mother of Green Day guitarist Jason White (a North Little Rock native).

If you start discussing deceased musical legends, then the pool of candidates grows bigger. But such a list must include east Arkansas natives Johnny Cash and Levon Helm. Helm, from Turkey Scratch, Ark., went on to become a member of The Band and was ranked by Rolling Stone as the No. 22 best drummer of all time. Helm once gave a Razorback hat, one of his most prized possessions, to the Roger Waters of Pink Floyd.