Search
Home Arkansas Football Around the SEC Man, That Jeff Long Sure Could Pick ‘Em 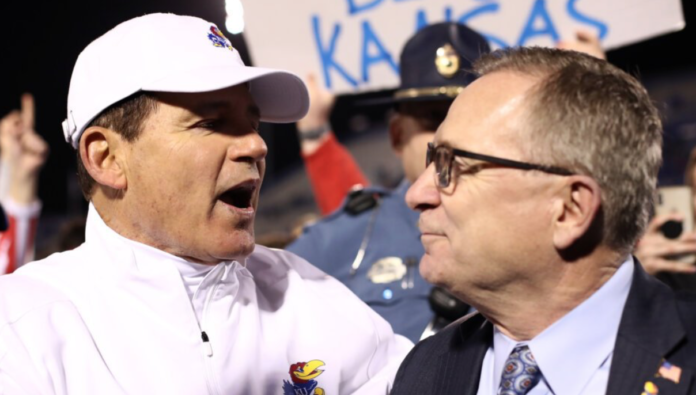 In the summer of 2017, sportscaster Bo Mattingly caught up with Jeff Long, then Arkansas’ athletic director, and asked Long if he regretted any of the coaching hires he’d made in his nearly 10 years in Fayetteville.

“Probably one,” Long told Mattingly, almost certainly referencing Bobby Petrino. “Probably that I compromised what I believed in because I thought a certain kind of coach needed to be in this conference to compete.”

“So it’s a regret of myself and not living true to my values and what I believe in.”

One of the things Long believed in was not hiring a 25-year-old former volleyball player whom you had slept with and given a $20,000 gift. That’s what Bobby Petrino had done shortly before his infamous motorcycle accident and firing as Hogs coach.

Jeff Long was recently fired today just a day after firing Les Miles, the man Jeff Long wanted to hire to replace Petrino and the man he did hire in 2018 to be Kansas’ head coach.

.@CoachLesMiles tells us he considered taking the Arkansas job back in 2012 before Bret Bielema was hired: pic.twitter.com/qZC4hBrD8o

“I’m pretty upset, but I know how the world works” Long told CBS Sports after being let go. “I’m just sick because I tried to do everything the right way with high ethics and morals and doing the right thing for young people.”

“That’s the only thing that disappoints me.”

A recent torrent of published reports by law firms chronicled significant alleged misconduct by Miles at LSU from 2009 through 2016 got the ball rolling.

They included Les Miles’ attempts to sexualize the staff of students working for the LSU football team in 2012, allegedly demanding he wanted “blondes with big boobs” and “pretty girls,” as USA Today puts it.

According to a report, Miles suggested to one woman they meet up at a hotel or his condo to “talk about her career.” One of the students said he kissed her twice while in Miles’ car, but Miles denied that.

It got so bad that in 2013, then LSU athletic director Joe Alleva wanted to fire Miles. “I think we have cause,” he wrote in a message to the incoming university president.

“I specifically told him not to text, call or be alone with any student workers and he obviously didn’t listen. I know there are many possible outcomes and much risk either way, but I believe it is in the best interest in the long run to make a break. The court of public opinion would favor us.”

Les Miles had only won three of 21 games in his two seasons at Kansas.

He was brought aboard because Long and Miles were friends dating back to the late 1980s when both worked at Michigan.

In fact, Long was so smitten with the idea of bringing Miles on board as a big name for Kansas football that he worked with Bo Mattingly on a behind-the-scenes special detailing the hiring process — which began even before the last KU coach, David Beaty, was officially fired.

Here is the result, which features one of the most hilariously dressed Les Miles you will ever see:

Les Miles at the :40 mark is the stuff of good comedy.

In the below press conference on Tuesday, Jeff Long said he didn’t know that his friend was a sleaze ball. But it seems like he didn’t do enough digging.

For one, while at Arkansas, Long was constantly networking with other ADs across the nation. It seems likely he would have chatted with Alleva about Miles at some point along the way. He should have gotten at least some hint about the issue through back channel conversations.

For sure, Jeff Long would have known about the 2013 Sports Illustrated report that detailed Miles’ time as head coach at Oklahoma State, his stop before LSU.

There, “it was revealed that Miles had a first-hand role in selecting female students for their ‘Orange Pride’ hostess program,” as Dillon Davis writes for Through the Phog. “Many of the hostesses reportedly lured recruits to OSU by having sex with them during campus visits, and according to the students and athletes who spoke to SI, some of the staff were aware it was happening.”

Granted, Miles denied knowing anything about all this, but still — allegations of this magnitude are enough. They should have prompted Long to do some deeper digging into Miles’ past at his head coaching stops.

In Long’s defense, Miles might have simply omitted important details — just as Petrino had so many years before.

If Miles and Long really are good friends, shouldn’t Miles have confided to Long during the interview process that these allegations were lurking in the background — a potential powder keg if an investigation ever unearthed them (as USA Today probing has)?

Apparently, Miles either never gave Long a heads up — or he did and Long simply overlooked the issue because he was so smitten with the idea of getting a former star coach to helm a horrible Jayhawks football program.

Indeed, in a deposition, Long didn’t even recall two of the four people he interviewed in person for the Kansas job. (He totally forgot the names of Jeff Fisch and Lou Anarumo.)

The program is now arguably in worse shape than when Miles arrived. Beaty in his last two seasons went 1-17 in the Big 12 and 4-20 overall. Miles is 1-17 and 3-18. Plus, its most well-regarded young coach, Brent Dearmon (former Arkansas Tech OC), recently chose to leave Kansas for a lateral move to Middle Tennessee State.

More than 13 years ago, Long made another hire that raised major question marks.

Just like with Les Miles at Kansas, Long was looking to make a big splash on the national scene soon after replacing Frank Broyles as Arkansas’ athletic director.

He ended up signing Bobby Petrino. On the field, Petrino was brilliant. Off the field, he was as polarizing as they came.

At previous stops, Petrino had already done enough to raise red flags on his character.

Less than a day before he announced he was heading to Arkansas, Petrino had personally promised team owner Arthur Blank that he was staying in Atlanta as the Falcons’ head coach.

“Petrino didn’t even have the guts to tell his players personally that he was leaving,” Sportscasting’s Rick Thomas wrote. “Instead, he left laminated notes on the lockers of the players.”

“By that point, Petrino had basically already lost all the respect of both the players and the Falcons’ coaching staff. In a later interview, reports Cincinnati.com, Falcons defensive coordinator Mike Zimmer called Petrino a ‘gutless MF.’” (Later, when Petrino’s Razorbacks were tearing it up in the SEC, Hogs would turn the idea of Petrino as an MF’er into a meme.)

Long saw, however, all the winning Petrino had done at Louisville and looked past all the warning signs. For a while, it seemed, his bet paid off. Then Jesscia Dorrell and motorcycling ineptitude happened, and everything changed.

Instead of rehashing that story for the millionth time, this song wraps it up a way that’s actually kind of awesome and pleasing to hear:

At Kansas, Jeff Long didn’t even get the benefit of his risk with Miles paying off for a few years before everything collapsed.

Long is now 61 years old. He’s acquired millions of dollars over the years and through his recent buyouts. It’s probably time he takes a long look at retirement.

Long opened up to Bo Mattingly about what happened in late 2017.

He said he was a bit surprised he got fired, but not shocked given how much the Arkansas football program had slipped. “I simply know that the Board of Trustees decided they wanted to move in a different direction and the President and the Chancellor followed suit,” he said.

“So I respect their authority to do that, that’s why we have boards. They’re 10 people who have the best interest of the university at heart and they felt it was time to make a change.”

“And I get that, I’m not bitter, I understand that they can make that choice. I’m fortunate I have a very good contract and so I will live by the terms of the contract as they will.”

“It happens in the industry, I’m not happy about it. I’m incredibly, incredibly proud of the program we built and the shape we’ve left it in, and now it’s for a new person to take it and go from there.”

Hunter Yurachek has certainly done that, and more. He’s been about as good of an athletic director as Arkansas could hope for.

For more about Jeff Long’s allegiance to Bielema, and the role that played in his ouster, check out 1:30 here: