Search
Home Arkansas Football What Kelly Bryant Did In Arkansas 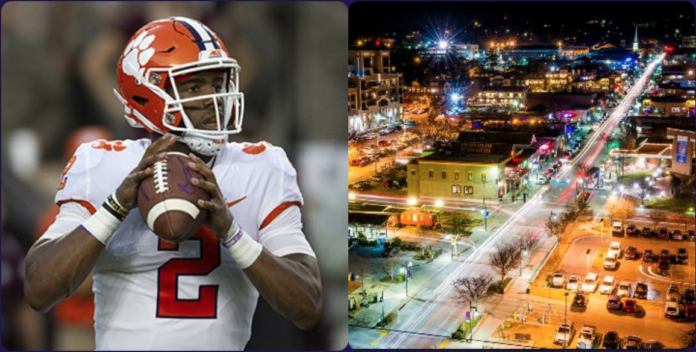 Transfer quarterback Kelly Bryant has only visited two campuses so far — North Carolina and Arkansas. Based on what we see below, he had a lot more fun in Fayetteville than Chapel Hill. Not only because he’s a lot closer to the Hogs’ coach Chad Morris, but because he enjoys the vibe of a once-proud SWC/SEC program that he knows he can help.  “He sees Fayetteville as a bigger Clemson and he likes that,” said Razorback insider Otis Kirk, who interviewed Bryant in Fayetteville. “It reminded him of home, it felt like home.”

Now check out Kelly Bryant below, just diving into the Hog Calling like it was second nature:

Here’s Kelly Bryant getting excited after a sack — which help Arkansas secure its first shut out win since 2014.

Kelly Bryant getting pumped after a Hogs sack. What a beautiful sight.
(Via @McKaleScallions.)pic.twitter.com/QmHy52KWxe

Well what do you know — here is again, just hanging out with gargantuan Ryan Mallett (who, if that whole NFL thing doesn’t work out, could make bank by teaming up with equally gargantuan Cole Kelley on the wrestling circuit). Then 2019 Razorback recruit Hudson Henry, little brother of Hunter Henry, just shows up.

The fans love Kelly Bryant. And he loves ’em right back!

Kelly Bryant staying long after the game, still on the field meeting and greeting fans. ? pic.twitter.com/24VrLDeeuq

“We had a lot of great recruits here today,” Arkansas coach Chad Morris said after the Razorbacks’ win against Tulsa. “I can’t wait to show off Fayetteville tonight* to our recruits.”

Morris then explained his message to recruits this week:

“I think the biggest message that I want any recruit to hear — regardless of whether it’s this weekend or next weekend or whenever — is man, just look at the passion,” Morris said. “Just look at the love for this university that’s all across our state. You can just walk and feel it and see it and it’s evident. As I tell them, just open your eyes and open your ears. Because what we’re doing in this program and building a foundation and what great thing are coning, and coming every day, as we continue to get better, to be a part of something extremely special. That this fanbase, that this university, that this state so deserves.”

*Translation: “This dude is totally going to Dickson Street.”

Oh, and if you’ve made it this far, you’re probably feelin’ this:

Yal got anymore of them Kelly Bryant updates?.. pic.twitter.com/jO3G2nhaqF