Quarterback Kelly Bryant is aiming to choose a new school by December. The most desired transfer in the nation recently said he has a “real strong” relationship with Arkansas coach Chad Morris. “I’ve been talking to him and it seems like we’re picking up where we left off when I was a senior coming out of high school,” Bryant told radio show host Bo Mattingly.

Although he never actually coached Bryant, Morris was his primary recruiter as Clemson’s offensive coordinator and convinced him to commit. However, the connection between the two goes deeper than that.

Already on the Tigers’ radar because his cousin, star wide receiver Martavis Bryant, played for them, Bryant attended a Clemson Junior Day on March 3, 2012.

At the time, he was a rising sophomore coming off a season in which he commanded Abbeville’s Wing-T option offense to a South Carolina Class 1A state title as a freshman. He showed enough skill to earn his second scholarship offer, just a couple weeks after South Carolina extended one.

“I like how me and him can just talk like we’ve known each other for a long time,” Bryant told TigerIllustrated’s Ryan Bartow a few days later.

“When I was going through the recruiting process, [Morris] was honest with me,” Kelly Bryant told Bo Mattingly. “He told me he didn’t know how long he would be there and there was a possibility that he may leave. That conversation we had really stuck with me throughout the process, because he didn’t have to tell me that. He could’ve just told me what I wanted to hear, that he was going to be there until I graduated. But just that honesty factor, that’s the biggest thing that I really grew on and leaned on, especially now that I’m going back through the process.”

“The guy is so knowledgeable. He brings so much enthusiasm to coaching in how he coaches the players. Who doesn’t want to play for a coach like that? He’s all about his players, all about finding the little things to get better at.”

Kelly Bryant, a graduate transfer with one year of immediate eligibility remaining for the 2019 season, went into more details during the October interview.

On what he most looks forward to on his Arkansas visit

“I’ve heard about the fans,” he said, his voice lifting. “I’ve seen it all over my Twitter feed and my Instagram. Just seeing the atmosphere, just getting a feel for the type of environment that I’m going to walk into. Just trying to find my new home. I’ve heard so much about Arkansas, and I just want to see what all they have to offer.”

A few years after Chad Morris successfully recruited Kelly Bryant to Clemson, Bryant led the Tigers to a 16-2 record and an appearance in last year’s College Football Playoff. He has thrown for 3,338 yards and 16 touchdowns against 10 interceptions in his career. He also rushed for 819 yards and 16 touchdowns.

Bryant, a history major, told Mattingly it’s important for him to get his masters degree in 2019. So making sure his credits transfer over from Arkansas is important. He said leaving his next school with that graduate degree is the “biggest” factor in his decision-making process. 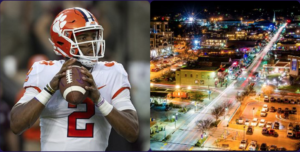 On what he wants on the football field

“Looking at on the field, scheme-wise, having the guys around me returning, having good, quality depth around me at all positions, guys coming ready to compete. Being a leader, being a guy that can come in and rally the guys, being a guy they can rally behind. A little bit of everything, to be honest with you. I’m going to take my time with this and not rush it, but also I want to make the best decision for me and the future, as well.”

“It’s totally different being a 17-year-old, 16-year-old, as opposed to being a 22-year-old. I’ve seen a lot. The biggest thing is I don’t want to be recruited. I don’t want to hear the pitch. This is my last year and I just want them to be straight up honest. What’s the situation, what’s the team’s situation and the quarterback situation? How can I get developed in a year? Because, for me, I feel like my best ball is still ahead of me. I have so much to learn and push myself to work, because I’m not a finished product and my best ball is ahead of me. I still have a way to go to even be close to where I see myself being.”

On plans for visiting other schools:

“I plan on taking some more [visits]. As far as where I’m going to take them, I’m not really sure. North Carolina was last weekend and this is pretty much all I’ve got right now. I definitely plan on taking them, I’m just finding out who reaches out and going from there.”

Listen to the whole interview here:

And if you just can’t get enough of Kelly Bryant as a Razorback speculation, check out this video by a man who simply goes by “Tyzilla83.” He shares some solid insight into what would happen to Arkansas’ other quarterbacks if Bryant transfers.