As the cliche goes, it’s a small world. In Arkansas circles, of course, it is smaller still.

This point was hammered home today when I got a phone call from Ron Watson, a Little Rock entrepreneur* to whom I’d last talked years ago when doing a Sync story on his cousin Darren McFadden. Watson and I got to talking about his non-profit organization, Had2, which promotes life skills among teens and young adults, and I quickly found out that, lo and behold, he’s partnered with Sidney Moncrief.

Moncrief and I have been talking lately in advance of a panel we’ll do February 28 at the Crystal Bridges Museum of American Art. It will be centered on the theme of my book African-American Athletes in Arkansas, which highlights the athletic heritage of the state before and during integration with a focus on race relations. Moncrief’s head coach at LR Hall, Oliver Elders, will join us. I look forward to their sharing of memories, given how important both these men are in the annals of Arkansas (and national) sports history.

That night will be all about honoring the past up through the present. But what of the future?

That’s the focus of the non-profit organizations Watson and Moncrief have launched, and why the two men are now partnering. Watson’s Had2 organization aims to increase the graduation rate of Arkansas youths and reduce violent crime through motivational messaging and educational events which promote the development of professional skills (e.g. “interview skills” like making eye contact, clear enunciation, a firm handshake). Moncrief’s Game Changers organization, meanwhile, includes in its mission statement the teaching of similar “soft skills” as part of training for leadership and career advancement.

Part of the two organizations’ joint mission will be to teach the following:

Watson and Moncrief are expending considerable efforts on empowering today’s youth with these skills. I can empathize. I see my book as much more than a simple sports history text — I envision it as a springboard for inspiring Arkansan youths who don’t intrinsically care about history (or even reading) but do care about sports.

To that end, I’ve developed lesson plans based on African-American Athletes in Arkansas which central Arkansas school districts are starting to use this year. I hope this groundbreaking, interdisciplinary approach to education inspires some students and educators to go beyond, out of the world of sports and into public history. Every all-black high school which existed in Arkansas pre-integration has a heritage through its surviving alumni, the stories they pass down and the memorabilia (e.g. yearbooks, sports trophies, photographs) which they safeguard.

Unfortunately, these “gatekeepers” to the past are only getting older and every year dying off. Unless there is a concerted effort to preserve their memories (e.g. making digital scans for uploading to a Website), then a large part of our state’s past will perish forever when their generation passes. I have heard that some of the gatekeepers’ own children would rather throw away the memorabilia than mess with keeping it.

So I’m partnering with the Butler Center on a digital history project with a dual focus: the state’s African-American sports heritage and the overall heritage of its all-black schools. I’m building a master list now of all the schools we will chronicle while simultaneously reaching out to alumni associations and county historical association presidents across the state.

Watson and Moncrief are invested in helping the next generation of Arkansas adults be successful in their working years, while I’m mainly focused on shining a spotlight on the retirees whose working days are long past.

Still, I like to believe the wisdom and experience of the elders can serve our state’s future down the line. Contact me at info@heritageofsports.com if you’re interested in the project.

*It seems Watson knows just about everybody in the sports world.

Here’s a picture, taken from Had2.com, of Kobe Bryant rocking one of the organization’s shirts: 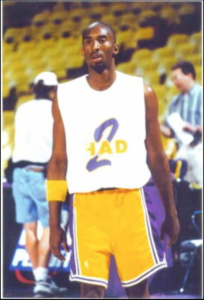