To most Razorback fans, Oliver Elders is known as the first in a line of great Little Rock Hall High basketball coaches. He coached future Hogs like Sidney Moncrief and Allie Freeman while winning four state titles.

Elders took over at Hall High in 1971. He was one of the state’s first African-American head coaches of a previously all-white basketball athletic program. At least two other coaches precede him:

In 1970, Marianna’s James Banks left all-black Strong High School (previously known as Moton High) to take over at Lee High School. Not far away, in Helena, Ron Taylor, left previously all-black Eliza Millar High to take over Helena High. Click the below clip to read more about the integration of that team: 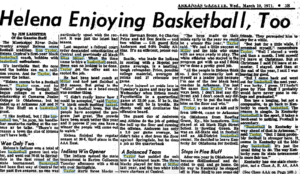 Oliver Elders’ career, especially at the all-black schools where he played and coached before Hall, is highlighted in Untold Stories: Black Sports Heroes Before Integration. In that anthology, former Democrat-Gazette reporter Darren Ivy provided some details about:

Elders, who stood a half inch under six feet, led the team to the 1949 state championship, preventing North Little Rock’s Scipio Jones High School from repeating. “He was excellent,” said Clay Wisham, who played for Jones. “He had a good set shot, and could handle the ball. He was a good all-around ballplayer.”

[More information about Elders’ prep days is provided in a July 8, 1968 Gazette article. Elders told Gerald Jordan “I went out for basketball in my 10th grade year, but I didn’t make the first team until my senior year.” That year, though, he made All-State.]