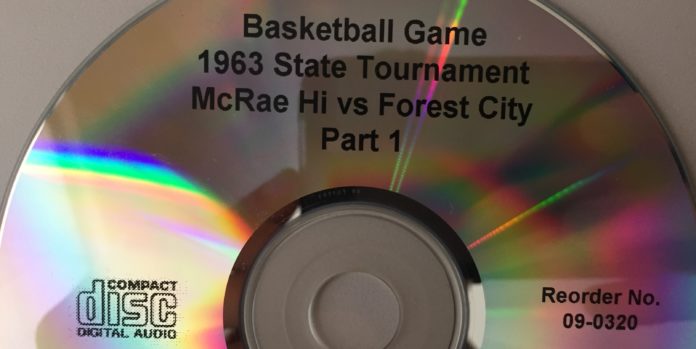 Snippets from the earliest known extant recording of an African-American sports event in Arkansas.

Click below to hear some excerpts from a KTPA (Prescott) broadcaster at a 1963* state tournament game between two all-black high schools: Prescott’s McRae and Forrest City’s Lincoln.

It’s quite a trip back through time, capped by the last line: “These boys can play some basketball, let me tell you!”

In other parts of the broadcast (not available above), you can hear more talk about Odell Hardman** and No. 22 Louis Hardman. “That Louis Hardman is making some fabulous shots!” and “That boy can shoot from that far corner!”

Here are some other McRae players mentioned:

*Russell Hawkins, now 84 years old, was the head coach of the McRae team in this broadcast. He gave me the CD, burned from an audio tape. While he wrote “1963,” he said it’s also possible it could have been spring 1964. Unfortunately, most records of those state tournaments appear to be lost or destroyed.

** The broadcaster pronounced the brother’s surnames as “Hardiman” but Hawkins assures me that the correct spelling of their last name had no “i” in the middle.