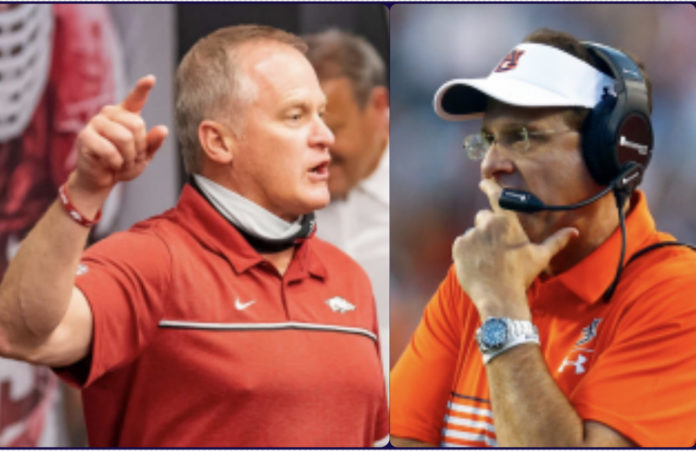 FAYETTEVILLE — After taking the Arkansas athletic department to historic heights, it doesn’t sound like Hunter Yurachek is going anywhere any time soon.

Not even a full year after receiving an extension and raise from the UA, the Razorbacks’ athletics director will soon get another pay bump on the heels of being pursued by another program.

“Throughout the nation, many have taken notice of the record-breaking success we have achieved together at the University of Arkansas,” Yurachek wrote in a statement on Twitter. “Our many accomplishments are a credit to the collective commitment of our student-athletes, coaches and staff members, Razorback Foundation members, season ticket holders and fans.

“I am sincerely appreciative of the continued support for our program from our Board of Trustees, President Don Bobbitt, Interim Chancellor Charles Robinson and our entire campus administration. I am honored to be the Director of Athletics at the University of Arkansas and look forward to even greater things to come as we move forward together as ONE Razorback.”

According to an email obtained by Best of Arkansas Sports through a Freedom of Information Act request, Yurachek has agreed to a contract with an annual salary of $1.5 million beginning Jan. 1, 2023. The deal as not yet been fully executed, but it has been verbally agreed upon.

The new deal also locks him in for another six months, as it will expire Dec. 31, 2027, and his previous extension went through June 30 of that year.

On top of his base pay, Yurachek is eligible to receive $250,000 annually in deferred compensation, which would be payable after Jan. 1, 2028. That would essentially raise his annual income to $1.75 million, which is more than double his original salary at Arkansas.

According to a database of public Power 5 schools on AthleticDirectorU.com, Yurachek’s $1.75 million salary would have ranked eighth nationally and second in the SEC — behind only Tennessee’s Danny White ($1.8 million) — in 2020-21.

The email, which was sent from UA System President Don Bobbitt to interim chancellor Charles Robinson, also specified that Yurachek’s pay would be “increased each year by [a] minimum of average faculty and staff raise,” but he could get larger raises upon recommendation.

According to a UA spokesperson, Yurachek’s raise comes after “an offer was made from another institution.” It was not specified which school pursued him, but it’s widely believed to have been SEC West rival Auburn. According to an Arkansas Business report, Auburn offered Yurachek an annual salary of $2 million, which would have made him the top paid SEC athletic director and put him in the Top 5 nationally based on the 2020-21 numbers behind only Texas’ Chris Del Conte, Arizona State’s Ray Anderson and Oklahoma’s Joe Castiglione.

The Tigers were instead able to lure John Cohen away from Mississippi State, officially making the hire Monday. He’ll be paid about $1.5 million annually, according to Sports Illustrated’s Ross Dellenger, hence the raise for Yurachek.

(One of Cohen’s first actions as Auburn’s AD was firing football coach Bryan Harsin, whose last game was a convincing 41-27 loss to the Razorbacks.)

For Arkansas fans, Auburn’s unsuccessful pursuit of Hunter Yurachek was a sweet role-reversal from what unfolded in the past with Gus Malzahn.

The Razorbacks reportedly went after the Fort Smith native after firing Bret Bielema, but he turned down his home state school. On top of spurning Arkansas, Malzahn apparently leveraged its interest into a seven-year, $49 million contract with a massive buyout.

Despite his success as a high school coach in the state and as the Razorbacks’ offensive coordinator in 2006, he has long been a divisive figure in the Natural State. His 2019 rejection, coupled with glowing comments about his “good friend” Chad Morris following the Razorbacks’ hire, soured an even larger portion of the fan base.

Only time will tell how good of a hire John Cohen was — he surely can’t be as bad as Morris was as a head coach in Fayetteville — but Arkansas coaches can at least revel in the fact that this time around, it was an Arkansas employee turning down Auburn and getting a raise out of it and not the other way around.

The Razorbacks won eight SEC championship and had nine top-10 NCAA finishes by its 19 sports, leading to a program-best seventh-place finish in the Directors’ Cup. That was one spot higher than they finished the year before that and it was the highest finish by a school competing in 19 or fewer sports.

While the success of Arkansas’ soccer, softball, track and field, golf and other sports shouldn’t be completely overlooked, an athletic director is typically judged by the success of the three major sports — football, men’s basketball and baseball.

Last year, the Razorbacks had an average winning percentage of .712 in those three sports — their best in the SEC era, topping the .695 mark set in 2011-12. Each of them also had success in the postseason, winning the Outback Bowl, reaching the Elite Eight and making the College World Series semifinals. That made it arguably the best single season at Arkansas since the late-1970s.

All of that helped Yurachek be named one of four ADs at the FBS level named a national Athletics Director of the Year for 2021-22 by the National Association of Collegiate Directors of Athletics (NACDA).

Two-thirds of the Big 3 are coached by men hired by Yurachek, as he replaced Chad Morris with Sam Pittman and Mike Anderson with Eric Musselman. Dave Van Horn was in place long before his arrival, but Yurachek did sign him to an extension that keeps him under contract through 2031. He’s also inked softball coach Courtney Deifel and soccer coach Colby Hale — who have built their programs into legitimate top-10 contenders — to extensions.

There also seems to be a genuine camaraderie amongst the coaches, too, which is something that can’t be said about every school in the SEC.

The SEC Itself as a Threat to Arkansas?

While this new contract seems to minimize the chances that Yurachek will bounce any time soon for another school, a few weeks ago Mike Irwin alluded to another potential threat down the line.

In late September, the longtime Razorback sportscaster referred to Irwin to a rumor that Yurachek is slated to replace Greg Sankey as SEC commissioner if and when Sankey leaves in the coming years to take over as the leader of a still-hypothetical association over the biggest Power 5 schools that would supplant the NCAA as college football’s chief governing body (the College Football Playoff’s board of managers have already discussed this possibility).

While this is the kind of thing that likely wouldn’t play out for another few years, it’s a bet just about as sure as anything you could get through an online casino instant payout that if Sankey leaves the next SEC commissioner will need to be innovative and forward-thinking in an increasingly complex and professionalized college sports landscape. Yurachek has already checked off those boxes in a few ways.

For one, he has pioneered that “One Razorback” movement to build strength across the athletic department. The head coaches of almost all of the Arkansas sports are regularly seen at each other’s games and support each other on social media. Take Sam Pittman, for instance, who has helped Courtney Deifel recruit for the Arkansas softball team.