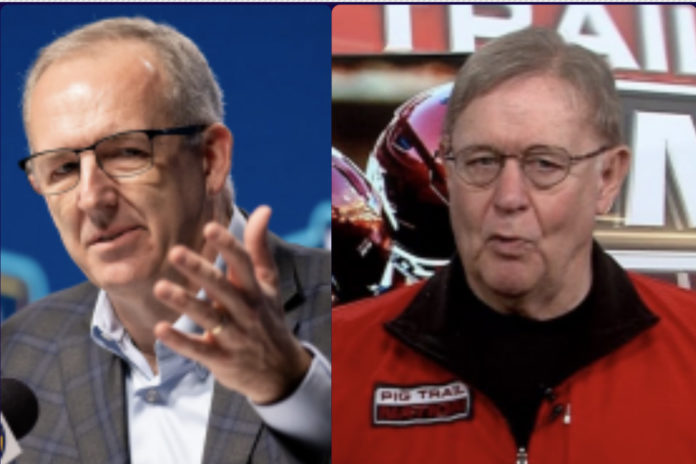 Last Saturday, Arkansas football fans gritted their teeth as they saw their favorite team repeatedly beat themselves and essentially hand the game over to Texas A&M. While such self-immolation is worse than seeing the other team win because they simply played a better, cleaner and more inspired game, things actually could have gone to a lower ring of Hell for the Razorback faithful.

In a more egregious world, the SEC office could have played a role in the loss. Of all the conspiracy theories to which Arkansas fans most tenaciously cling, after all, the idea that the SEC has it out for them is perhaps the most persistent. Just going back to 2020, we see a host of events that have set off three thousand smashings of keyboards and 30,000 furious Tweets. They include:

Even last year, during the Arkansas vs Alabama game, a controversy erupted when it appeared that the SEC referees were trying to stymie one of Arkansas’ early drives in the red zone. “Hell they aren’t even trying to hide the crap today,” longtime Arkansas football reporter Otis Kirk Tweeted. “This is beyond obvious. Pass those hats at the tailgates after the game and give it to the refs. Bonus money today in Tuscaloosa.”

Given how often these issues arise, it wouldn’t be surprising to see more referee-related hubbub erupt during this Saturday’s game between No. 2 Alabama and No. 20 Arkansas in Fayetteville. The frequency of these perceived slights is enough to make some fans wonder if such decisions seemingly against Arkansas (and often in favor of a school much closer to the SEC’s Birmingham office) will ever diminish and, if so, how?

“I don’t think it’s going to change until you get somebody in that office that has some pull who is a Razorback fan,” says Pig Trail Nation’s Mike Irwin, the longtime Razorback sportscaster.

In order to lay out how this theoretically would happen, Irwin touched on a rumor he says is circulating in SEC football circles.

Yurachek’s track record as a successful athletic director is no secret.

He has made stellar hires in Sam Pittman and Eric Musselman after a no-brainer firing of Chad Morris, but a much more difficult firing of Mike Anderson. In 2021-22, the 53-year-old also presided over the most successful season in Arkansas athletics since the Razorbacks joined the SEC in 1991.

Recent athletic success, combined with high graduation rates among student-athletes, is a big reason Yurachek received a national athletics director of the year award awarded by his peers in March.

The honors may not stop there, according to Irwin. In a recent “Ask Mike,” Irwin refers to a rumor that Yurachek is slated to replace Greg Sankey as SEC commissioner if and when Sankey leaves in the coming years to take over as the leader of a still-hypothetical association over the biggest Power 5 schools that would supplant the NCAA as college football’s chief governing body (the College Football Playoff’s board of managers have already discussed this possibility).

Irwin said he’s asked Razorback representatives about this rumor but was told “they don’t know anything about it,” which isn’t surprising in the least considering the multiple pieces at play and there’s no reason to acknowledge something that may not happen until many years out anyway.

Still, it isn’t far-fetched to imagine Greg Sankey rising to fulfill such a national leader role given the SEC’s primacy among conferences and his experience as “the most powerful man in college sports.”

Although Sankey had been an associate athletic director before taking over for his predecessor, Mike Slive, in 2015, previous SEC commissioner rose from athletic director ranks. The most notable example is Roy Kramer, who rose from Vanderbilt AD to that position in 1990 and oversaw the inclusion of Arkansas and South Carolina into the SEC.

Whoever takes over as the next SEC commissioner needs to be innovative and forward-thinking in an increasingly complex and professionalized college sports landscape. Yurachek has already checked off those boxes in a few ways.

For one, he has pioneered that “One Razorback” movement to build strength across the athletic department. The head coaches of almost all of the Arkansas sports are regularly seen at each other’s games and support each other on social media. Take Sam Pittman, for instance, who has helped Courtney Deifel recruit for the Arkansas softball team.

That sort of collaboration-first mindset is one reason Yurachek is widely regarded among the nation’s best athletic directors and could also potentially make a good commissioner.

He’s also shown a desire to learn about pro sports and think about how principles from that realm could be applied to a college sports world where players more and more resemble professional athletes. No question, Yurachek foresaw how Eric Musselman’s experience coaching in the NBA and G-League could benefit an Arkansas basketball program in an age where the transfer portal becomes increasingly important.

Yurachek has also repeatedly criticized the hefty contract amounts – and especially the buyout clauses –  for relatively unproven head college football coaches. That’s why Yurachek made sure, in Pittman’s first contract, Pittman would only get paid big-time money if won at a big-time level.

Hunter Yurachek and the Future of SEC Football?

“I think we have done a subpar job as administrators in college athletics and managing contracts,” Yurachek said at a recent Little Rock Touchdown Club. “Think of NFL, NBA, major league baseball coaches. You don’t hear about them revisiting their contracts every two or three years when they have some success. When they have incentives in their contracts and they have a five year contract, they’ll start renegotiating that after year four. And because you can’t tamper – you can’t play another NFL team off of another NFL team – because you’ll get in trouble for tampering as an organization.” (At this point, most Arkansas football fans are already thinking about Gus Malzahn’s flirtation with Arkansas and leveraging that for bigger money at Auburn.)

Yurachek continued: “Well, we don’t have that in college athletics, where a coach or their representative can threaten ‘Hey, this coach is going to go to this school if you don’t pay him this.’ And we have caved to that form of negotiation in college athletics and that has been bad for us, in my opinion.”

In an interview with David Bazzel, Yurachek then pointed out the lack of extreme buyouts in pro sports: “The Cowboys, I think, gross over $900 million as an organization. They pay their head football coach $4 million. I asked [Jerry] Jones a question: “Why do you pay your coach $4 million?” He said “Because that’s coming out of my pocket.” And that’s a great answer. Why is the Cowboys’ coach making $4 million but we have college coaches making over $10 million? Doesn’t make a lot of sense.”

Just as the Razorbacks’ pull with Jerry Jones, a UA alum, has helped the Arkansas football program over the years, it’s interesting to ponder the effect of Yurachek as SEC commissioner on the team’s fortunes.

In that scenario, “you’re losing probably the best AD you’ve had certainly since Frank Broyles left, and maybe as good as Frank in different ways,” Irwin says. “Would you be willing to give a guy up that’s done all that to have a guy that you would have influence with at the SEC office? I don’t think it would be a good trade. He might be able to help you some, but he couldn’t be totally biased. It would just eliminate the bias against Arkansas.”

While keeping Yurachek as Arkansas AD for another decade or more would be the best case scenario for many fans, “losing” him to the SEC office would be much better than Yurachek leaving for some bigger, more prestigious school.

Finally having someone who can stick up for Arkansas among all the Auburn and Alabama graduates at the SEC headquarters would go a long way toward no more getting the short end of the stick.

See Irwin talk about the rumor around 26:00 here:

More on Arkansas vs Alabama here: