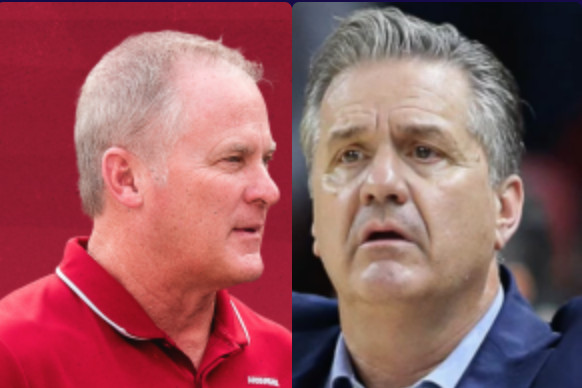 Over the years, Arkansas Razorback fans have never faltered in their love of giving John Calipari grief.

Pretty much every time time Calipari leads his Kentucky basketball team into an opposing arena, it’s an event for the opposing fanbase, but the Razorbacks reserve a special level of ire for Calipari by dint of the Kentucky-Arkansas SEC rivalry born in the early 1990s (as well as that time he said Arkansas was no longer a “national program” and his successful recruitment of Malik Malik).

That anti-Calipari passion occasionally spills over into other sports. Consider in 2020, during a highly anticipated matchup with No. 10 Kentucky in Bud Walton. Arkansas baseball coach Dave Van Horn attended that game and can be seen in the background of ESPN’s broadcast waving goodbye to John Calipari when he was ejected in the second half:

Then, this past spring, after the Wildcats were ousted in a first-round upset loss to St. Peter’s in the 2022 NCAA Tournament, a year after a 9-16 record in 2020-21, you had better believe that all other SEC teams’ supporters were taking a special glee in Calipari’s misfortunes. Especially Auburn and Arkansas fans when chatter bubbled up about Bruce Pearl and Eric Musselman as top replacements to replace Calipari.

Still, as common as taking shots at Kentucky basketball and Calipari has become, nobody saw what transpired on Thursday coming.

It all started in an interview with The Athletic when Calipari was expressing his desire for better practice facilities and tried to emphasize that basketball is still king at Kentucky.

To be clear, Kentucky is indeed a basketball school by reputation.

“Why can’t people just say the truth and it not hurt someone’s feelings?” Ari Wasserman said on the Andy Staples Show podcast: He added: “I know it’s rude to a certain extent because what Mark Stoops has done with the Kentucky football program has been remarkable, we’ve said it time and time again, but why it is offensive? Everybody knows (Kentucky is a basketball school).”

The problem is Calipari shouldn’t have known better to open this can of worms. He’s clearly feeling some of pressure of his Kentucky basketball program sliding in recent years and Arkansas ascending to the top of the SEC, not just in overall wins, head-to-head wins and NCAA Tournament wins, but also a better recruiting class in 2022.

And what a can of worms he cracked wide open. Mark Stoops, whose Wildcats football program has won three bowl games since the basketball Wildcats last won an NCAA Tournament, did not appreciate the UK basketball coach’s opinion:

Stoops should have been frustrated. Even though Kentucky is in the weaker SEC East, two 10-win seasons in the last four years (2018, 2021) and four straight bowl wins is no small feat. Kentucky is also ranked 21st in the coaches poll released this week, two ahead of Arkansas, and will likely rank near Arkansas in the AP poll to be released next week.

Winning in the SEC, even with the benefit of punching bag Vanderbilt in your division, is still hard. You don’t need another coach on campus making stupid comments like that. Especially when that other coach, as college sports analyst Aaron Torres puts is, is acting like “older brother patting little bro on the head, [saying] ‘We just hope you get to a little bowl game, and that’d be so cute – and get to 10 wins, we’d be so proud of you!'”

To Calipari’s credit, in the past he had sacrificed for the good of the athletic department, saying “let’s help out baseball, or football, or track and fields, or whatever,” Torres added. I had heard that, as weird as it sounds, the facilities have maybe fallen a little bit behind for men’s Kentucky basketball.”

“I think the point that he was trying to get across was ‘I’ve been nice. I’ve done my job, but we do need this practice facility.’ You can say that, and you can even acknowledge, ‘Hey, we’ve taken care of other projects across campus,’ without then saying ‘We’re a basketball school.'”

What happened next is something that should make Arkansas basketball fans very happy. As Musselman and Calipari battle over top recruits in the 2023 cycle like 5 stars Ron Holland and Baye Fall, UK football players publicly went after the Kentucky basketball program.

Former UK punter Max Duffy tweeted: “Completely out of the blue question but has the Kentucky football team ever lost to St. Peters?”

And then this jaw-dropper: Current UK cornerback Vito Tisdale tweeted “Y’all crapp,” at Calipari. “We run the bluegrass, yall boys went out first round to saint peters.”

Musselman would never admit to it, but you have to believe he (and other top college basketball coaches) can’t help but smile a bit when they see that. Why would a top recruit want become part of an athletic department in which other Wildcats consider your program to be “crap” and you can’t count on the support of other high-profile student-athletes?

No doubt, Calipari and Stoops will come to some sort of rapprochement in the aftermath of this bickering, but the damage to recruiting has already been done. Arkansas, among others, should benefit.

“These comments from John Calipari show cracks in the foundation of the UK athletic department,” Outkick’s Trey Wallace wrote. “There’s no reason to give other schools the ammunition needed on the recruiting trail or that the school doesn’t have the best interest of the basketball team.”

Hunter Yurachek, Clay Moser Get Into the Fun

Not long after the 2020 UK-Arkansas game at Bud Walton Arena, reporters asked Dave Van Horn about waving at the ejected Calipari. He said, we can assume tongue in cheek: “I was just stretching my arm. It was a little sore. I was a little stiff at the game.”

Unquestionably, this is a silent dig at Kentucky, something other programs like Auburn also took.

But Arkansas basketball assistant coach Clay Moser wasn’t so coy about his message:

It’s not just talk with the assistants and head coaches of Arkansas’ big three sports (Sam Pittman, Eric Musselman and Van Horn) either. They back up their affinity for each other with their actions.

The most tenured of the group, Van Horn has been known to ask reporters after baseball games for scores of basketball or softball games being played at the same time. He’s also a frequent attendee of other sporting events when his schedule allows for it.

More recently, Van Horn made his way to Bogle Park for the softball team’s super regional against Texas. What made that appearance notable is that his team had just been eliminated from the SEC Tournament and was seemingly spiraling heading into the NCAA Tournament.

Sam Pittman’s Support of Other Sports

Pittman is the least experienced of the three when it comes to being a head coach and hasn’t been shy about his admiration of the more accomplished Van Horn and Musselman.

In fact, he invited the pair to join the football team on the sideline for the Razorbacks’ annual matchup with Texas A&M at AT&T Stadium in Arlington. They accepted the invitation and watched up close as Arkansas snapped its nine-game losing streak to the Aggies.

“I said I think we’ll be more powerful if y’all will come down on the sideline and stand there,” Pittman said afterward. “Eric was already coming and Dave had practice, and he canceled practice. I really, really appreciate both of them. It was a special moment for me as head coach to have… I mean, it’s Dave Van Horn and Eric Musselman, my God. It was really special for me to have both of them down there.”

Even though he’s originally from Oklahoma, Pittman has loved the Razorbacks since he was a kid and his pride for Arkansas shines through when other teams have success — such as when he revealed the new Hog statue at his lake house in Hot Springs after the basketball team knocked off No. 1 Gonzaga in the Sweet 16 last March.

The fact Pittman posted something on Twitter is notable because he’s not really big on social media, which is a stark contrast to Musselman, who utilizes social media better than any other coach in college basketball.

Arkansas fans learned that pretty quickly, as he shared photos of himself in a full baseball uniform within months of being hired back in 2019. It was such a memorable moment that Van Horn, when told Musselman attended the Razorbacks’ win over Stanford at the College World Series this summer, asked reporters if he wore his uniform.

“It’s a fun place to work right now,” Van Horn went on to say. “Sports are winning. I feel like the coaches all support each other. I mean, I think Hunter’s in here, so I’m not going to say too many nice things about him, because he’ll think I’m smooching up to him or something. But he does a good job, makes everybody feel like they’re important and their sport matters. And I believe they all do.”

Musselman gives love to all of the other sports, too. Most recently, he played football on the beach with his players during their foreign tour in Spain.

As long as all the three big Razorback sports are winning at an historically high level, everything looks good. Nowadays, as Torres puts it, “Arkansas is an ‘everything school.’ You guys just win in everything these days, so you don’t have to worry about [labeling it as] a ‘football school’, ‘baseball school,’ ‘basketball school.'”

Good times, of course, have a funny way of not lasting forever.

Older Razorback fans remember the Rolling with Nolan Days of the 1990s spiraling into the ugliness of Richardson’s firing in 2002 and the subsequent racial discrimination lawsuit that involved Houston Nutt and the difference in salaries between Arkansas’ football and basketball head coaches.

Things can always turn south again. But it sure is fun to enjoy the good times while they last – especially when Calipari carelessly gives Arkansas a recruiting gift like this.