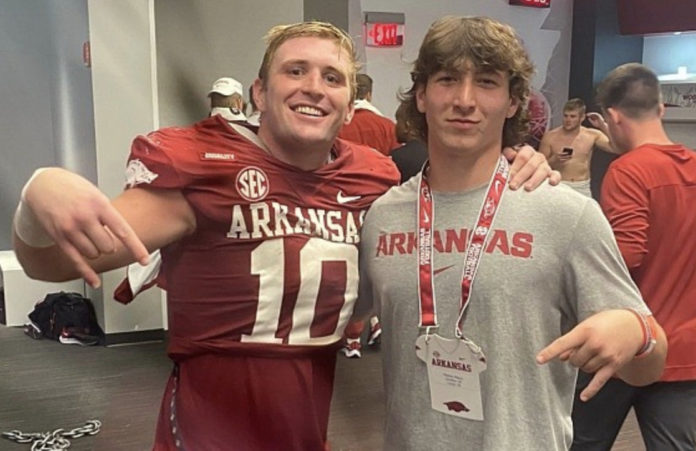 It’s no secret that the state of Texas is vital to Arkansas’ recruiting of talented football players. The current Razorbacks squad is studded with Texan native standouts like safety Jalen Catalon and linebacker Bumper Pool and there’s no reason to expect the pipeline to run dry any time soon. In fact, one of the next great Arkansas football linebackers may just come from Pool’s alma mater: Lovejoy High School in the northeast DFW metro area.

Lovejoy’s Payton Pierce is a 4-star linebacker who ranks as a Top 100 recruit nationally in the class of 2024 according to 247Sports. When you view the film on Pierce, the first thing you notice is that the young man is built similar to linebackers who play in the SEC. At 6’2” and 225 pounds, Pierce is just five pounds under Pool and the same height. It’s clear he has the SEC-type body to play the position.

Another linebacker with similar size is Alabama’s Dylan Moses at 6’1” and 235-pounds. Over the past few years, staying in that 6’2” range has become the standard in college football after a previous trend going in the bigger linebacker direction. Pierce’s game is similar to Pool’s in that he is always around the football, and almost never out of position. He should be an impact player on Saturdays and beyond.

Lovejoy coach Chris Ross, a former football program development director at Boise State, has seen a lot of good players in his more than 20 years of coaching.“Payton will play in the NFL,” he told Arkansas recruiting reporter Richard Davenport. “He is an elite player athletically and mentally. He has a unique skillset and mindset.”

That’s seen in Pierce’s 2021 stats: He accounted for 131 tackles, 21 tackles for loss, six sacks, six pass break ups, and five forced fumbles. This spring, however, Pierce’s focus has shifted to wrestling. In fact, Pierce loves the sport so much he informed me that he he wasn’t playing football, “I would focus on wrestling fully.” He wouldn’t be the first Razorback with such a background. In high school, Treylon Burks played baseball and apparently wrestled wild boars.

Arkansas Recruiting vs Others

Pierce has picked up 13 scholarship offers including one from the Arkansas football program. Pierce tells me that “Arkansas, Baylor, and Texas are the three schools that contact me the most.” Pierce has already visited the Razorbacks twice and has enjoyed his visits. He’s already plenty familiar with the school given he works out with former Arkansas running back Jonathan Williams and knows a lot of Lovejoy alumni who became Razorbacks.

“Arkansas is real strong in Lovejoy right now,” Pierce told Davenport. “It’s a popular place over here. Nearly our whole high school and the old high school I went to almost all of my friends are up there attending Arkansas I know so many people up there it’s unbelievable. They all love it.”

Baylor, however, is a force to be reckoned with. Under Baylor football coach Dave Aranda, the Bears have developed a reputation for having a tough defense. Last season, the Bears finished the 2021 season with the fourth ranked defense in the country and terrorized the Ole Miss Rebels in the Sugar Bowl. The Baylor defense held the high powered Ole Miss offense to only 184 passing yards. The game was completely changed early when Ole Miss quarterback Matt Corral sustained an injury and did not return.  Aranda has made it a priority to have a strong defense and last season the Bears had a defense that would cause opposing quarterbacks to struggle. Pierce is the kind of linebacker whom the Bears place a priority on recruiting.

When you watch Pierce’s tape, it is easy to understand why he is so highly recruited. Pierce does a good job of fighting off blocks and getting into the opponent’s backfield. Bumper Pool has always been a linebacker that uses his speed well to fend off blocks and that is something Pierce also does very well. Pool and Pierce alike are always around the ball carrier and in on every tackle. As you can see in the below video, Pierce causes nightmares for the opponents rushing attack and as one blocker is not enough to contain him.

He has the talent to work from the linebacker position or move to an edge rushing position and cause plenty of confusion for the opponent’s offensive line.

It surprised me that Payton Pierce is extremely disruptive when it comes to defending the pass. Pierce drops back into coverage well and has the hands to pick off the pass and take it the opposite direction. Over the course of his career, he has broken up six passes. Offensively, he’s shown he can punch the ball in the end zone having done so 10 times.

The Arkansas Razorbacks are in a good position for the Lovejoy’s linebacker’s services. In April of 2021, Pierce told the Lovejoy High School Red Ledger that Arkansas is his favorite college team. According to Pierce, “the coaching staff and the atmosphere at Arkansas are amazing and fit me well.” The emphasis that the Razorbacks are placing on his recruitment is a great indicator of how much they value the position and Pierce’s talents.

Pierce told me that “that the main goal I have is to win the state championship.” The last time Lovejoy won the state championship was in 2018. Pierce explained that the individual goals will be accomplished by the wins Lovejoy racks up during the season. Pierce places an emphasis on “being able to make my teammates and people around me better.” The young man is extremely committed to the team continuing to improve and winning as a team, not as individuals.

The college recruiting season is one that never really ends. Pierce is planning on making more unofficial visits in the spring. Arkansas will be a school that he would like to visit again at some point this spring. A visit this spring will make Pierce’s third time visiting Fayetteville and the Hogs and should put the Razorbacks in a good position for securing his commitment.

Many things, of course, can happen between now and National Signing Day for the class of 2024. Coaching staffs change and recruiting can be extremely fickle. Making an early prediction is something I rarely do, but I feel as if the Razorbacks are the current leaders in the recruitment of Pierce. Pierce would bring to the Razorbacks the same tenacity and mentality that Grant Morgan and Bumper Pool have played with over the years.

There was a lot of talk about building an Arkansas recruiting pipeline to Texas under Chad Morris. While that didn’t pan out in the Morris era, getting two blue-chip recruits at the same position from the same high school not too many years apart would be a clear indicator that such a pipeline is finally flowing.

For more on Arkansas recruiting, see this: