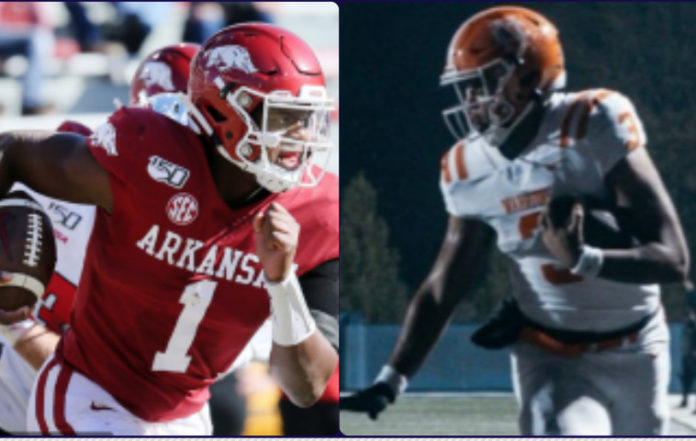 With the emergence of KJ Jefferson, Arkansas’ particular brand of dual-threat quarterback clearly skews toward the Mack truck variety. As a sophomore last season, Jefferson racked up 664 rushing yards and 6 touchdowns while staying healthy for most of the year. No question, his 245 pounds on a powerful 6’3″ has gone a long way toward achieving remarkable durability despite a punishing running style.

As unique as Jefferson is, Arkansas’ next great dual-threat quarterback could be cast from the same earth-thundering, teeth-rattling mold. The Arkansas football staff is hot on the trail of two class of 2023 blue-chip quarterback recruits who rank among the top 20 in the nation according to 247Sports.com. One is Jaden Rashada, a 4-star California quarterback who doesn’t yet appear to have a clear favorite. The other, Malachi Singleton from Georgia, has picked up two crystal ball predictions to Arkansas:

Still only a junior in high school, Singleton is among the most powerful quarterback recruits in his class. In the past two years starring for North Cobb High School, the 220-pounder has racked up 2,218 yards and 52 touchdowns on the ground alone.

That means, if he stays healthy in 2022, he’s on track to surpass Jefferson’s career rushing statistics as a high schooler in Mississippi. At North Panola High, Jefferson racked up a total of 2,922 rushing yards and 24 rushing touchdowns.

Even though Jefferson and Singleton played against different caliber of opponents, the fact that Singleton could triple Jefferson’s high school rushing touchdown total by the end of 2022 should tell you all you need to know about his potential as a dual-threat QB. (In 2021, Singleton also completed over 70 % of his passes for 3,967 yards with 39 touchdowns vs nine interceptions.)

Last season, Singleton was teammates with 2022 Arkansas signee Sam M’bake and has already visited Arkansas twice. He will return this weekend. According to 247Sports, Singleton is a fan of Arkansas offensive coordinator Kendal Briles: “He keeps it real with me and he has always been honest with me. 100 percent straight forward. He doesn’t sugar coat it or nothing. Every time the coaches could come see me, he made sure that he did. I just love the way he runs his offense. I think it’s the perfect fit for me.”

On Monday, April 25, Singleton will announce his college destination. He currently has 16 offers from the likes of Georgia, Miami, Cincinnati, West Virginia, Georgia Tech, North Carolina State and Virginia Tech.

While Arkansas is the frontrunner, a few other schools may be in the running. He seems a bit cool on the defending national champion Georgia Bulldogs. “UGA has been on me since I was in eighth grade,” Singleton told 247Sports. “So, just having been there and having been around their coaches, that has them in it.” But he doesn’t really gush about Georgia like he does other teams.

“They got something that’s on the rise. You can definitely see that they got something building. They got a lot of guys out of the portal and a lot of talent now there. And Coach Malzahn, he did it at Auburn. So, he has been there and done that. Just building a relationship with him has been amazing. I mean he has coached Heisman winners.”

One of those Heisman winners was Cam Newton, to whom KJ Jefferson has drawn comparisons.

“I think this is going to come down to Arkansas and UCL,” Kirk recently said on Pig Trail Nation. “The reason I say that is he’s got a lot of family ties in his family to UCF, and Gus has done a good job recruiting him. I think it’s going to be one of those two schools, but I see Arkansas and the SEC winning out in the end for Malachi.”

In Favor of Arkansas Football Recruiting

On Monday, Kendal Briles Tweeted out the below foreshadowing of good Arkansas recruiting news:

Singleton retweeted that and then, not long afterward, pretty much showed his hand with this beauty:

This mash-up of highlights splices footage from the play of Singleton and KJ Jefferson. It’s clear that someone is ready to rumble as the next KJ.

Jaden Rashada and the Razorbacks

Jaden Rashada would be a huge get and potential breakout star for Arkansas football as well. He’s rated a bit higher as the No. 5 quarterback in the nation by 247Sports. “He has poise and does a nice job making plays off platform,” 247Sports recruiting analyst Chris Singletary wrote. “Mechanically he has a smooth effortless throwing motion. He is able to get the ball out quickly generating power from his lower body to have the ball snap out of his hand. Does a good job changing speeds and adding touch on his throws when need be to either fit the pass into tight windows or to complete throws over defenders.”

Rashada passed for 2,220 yards and 27 touchdowns with only five interceptions as a junior, while rushing for 193 yards and a touchdown, so while still a dual-threat quarterback he doesn’t tote it near as much as Singleton.

According to Kirk, his likely top schools are Arkansas, Ole Miss, Auburn, Oklahoma, Arizona State, Washington and UCLA. On a recent visit to Fayetteville during the Arkansas football spring scrimmage, a couple of current Razorback commits were trying to tip the scales in favor of the Hogs.

Rashada, at this point, isn’t the same kind of punishing runner that Singleton or Jefferson is. “From a physical standpoint he has a frame and build that can add ample weight and strength,” Singletary added. “Checking in at verified 6-foot-3.5 half and weighing in at about 185lb pounds you see that he has the mold to add at least 20 pounds of muscle easily.”

Another key difference is that while Jefferson has been pretty nonchalant about NIL deals, Rashada became the first high school football player to ink an NIL deal. More on that here:

Hear Otis Kirk discuss Singleton and Jaden Rashada more at the 1:10 mark below: