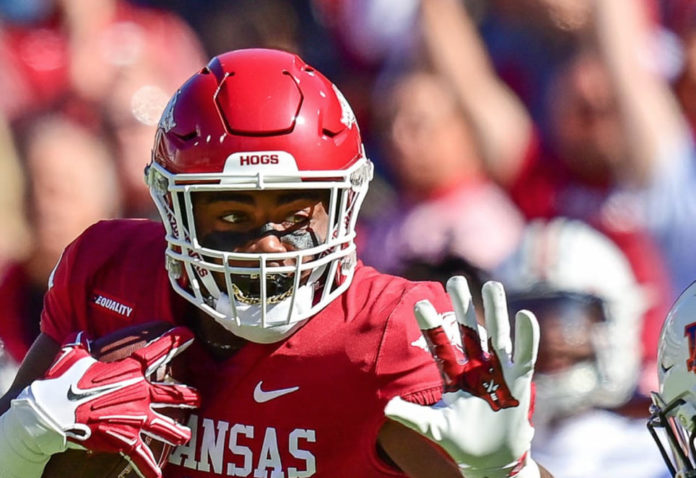 Treylon Burks is the best wide receiver in Arkansas history. Granted, qualifying anything as the “best” is open to interpretation. It’s completely subjective.

Try asking a Gen Xer or Millennial who is the best rapper in history. They won’t come to a consensus. And nevermind throwing in the Gen Zers or Baby Boomers. The latter generally thinks rap should be cast out. The former calls the iconic era of the genre ‘dad’ music.  And asking an Arkansas football fan about the ‘best’ anything when it comes to their Razorbacks is an exercise in frivolity. It’s also likely to give the asker of the question a headache, for the responses are likely to be far-ranging.

Example from a Baby Boomer: “All these guys now put up crazy numbers because they pass so much. Now, Lance Alworth, there was a wide receiver.”

This much can be claimed without much push-back, though: Treylon Burks is one of the best wide receivers in Arkansas history. The idea that he could be replaced in the season after he left is folly. Still, since he declared for the NFL Draft more than four months, the charge has been clear: Someone needs to take his place as WR1 in the Razorbacks depth chart. How quickly that person steps into the role – or, rather, tries to step into the role – could determine Arkansas’ ability to duplicate, or exceed, last year’s nine-win season.

The Outback Bowl win and spring camp allowed us to meet the faces of the candidates. It also showed no one is ready to take that mantle yet. Arkansas lacks experience at the position overseen by receivers coach Kenny Guiton. With the loss of Burks, Tyson Morris and De’Vion Warren, the Hogs lost more than 60% of their production at the spot in 2021. The carryovers – Warren Thompson, Ketron Jackson Jr., Bryce Stephens and Jaqualyn Crawford – had a grand total of 30 catches last year. Burks had 66 catches on his own.

So Arkansas made some moves in hopes of bolstering the position. Jadon Haselwood transferred from Oklahoma where he led the Sooners in catches (39) and receiving touchdowns (six). Malik Hornsby, the No. 2 quarterback behind starter KJ Jefferson, has also moved out wide, coach Sam Pittman and Co. hoping his athleticism can pay dividends more often than the mop-up duty playing behind one of the SEC’s best signal-callers would allow. None of them has shown Burks-like ability in the several weeks of camp.

There are two different ways of examining this. The optimist’s take is that Arkansas isn’t a passing offense, anyway. Not really. Arkansas was 11th out of the 14 SEC teams in passing last year, averaging 214 yards a game, and they still had their most wins and best season since 2011. The running game is the Razorbacks’ calling card and should be again with Jefferson showcasing himself as arguably the best running quarterback in the SEC and Dominique Johnson and Rocket Sanders each coming off 500-yard-plus seasons. AJ Green also brings an element of speed, and a change of pace, to the backfield.

Then there’s the negative spin. Arkansas was 11th out of the 14 SEC teams in passing last year even while rostering one of the all-time greats and a practically guaranteed first-round pick in next week’s NFL draft. Without him, defenses can pack the box, forcing Jefferson to throw to an inexperienced unit with zero projected first-rounders. No one should claim the Hogs will be one-dimensional on offense come fall, but the discrepancy in preference would be obvious to even the most casual on-looker.

Like with most things, the reality lies somewhere in-between. Thompson is a good third wide receiver. Jackson has the size and potential to be a future No. 1. Haselwood has done things on a big stage already, and simply needs time to adjust as he’s only been with the team for a few months. Hornsby could be a specialist in the open field, his danceability his most dangerous asset.

But Pittman admitted after Saturday’s scrimmage inside Walker Pavilion that the group, which dropped quite a few passes, needs to develop over the summer.

The last time Arkansas’ room looked like it does now was in 2018. La’Michael Pettway, Michael Woods, Jordan Jones, Deon Stewart and Jared Cornelius were the top five. Pettway led the team with 30 grabs for 499 yards. He left the next year for Iowa State. Woods stayed for two seasons before leaving for Oklahoma. Jones moved on to Cincinnati. Stewart tore his ACL and never played another down. Cornelius had his worst season of the five and was out of eligibility the next year. Like this year’s bunch, they weren’t a bad group, but other factors contributed to a lack of excitement and a miserable two-win season.

It’s nigh impossible to imagine Arkansas duplicating that year record-wise in 2022, but questions abound. Haselwood spent time in a green no-contact jersey for a chunk of spring dealing with a lingering shoulder injury and must learn the offense. Jackson is the most exciting, but tends to disappear for spells. Crawford is sheer depth. Hornsby isn’t a natural fit at the position (yet?). Burners Isaiah Sategna and Samuel Mbake will join Quincy McAdoo as freshmen in the fall, too.

The good news is that an old hat at the position could have his best season. Trey Knox, who isn’t a wide receiver anymore – as his new 240-pound frame attested Saturday – caught 20 balls last year and expectations abound that he could have the most receptions for an Arkansas tight end since Hunter Henry caught 37 balls in 2014.

“Last year, we had Burks as a bell-cow, as a go-to guy,” Pittman said. “I don’t know that we’ve found that yet. We’re closer. I think Haselwood has that role, but I think he’ll be a lot better, too, once he gets through summer and understands everything.”

And that’s the thing. Spring ball shouldn’t be taken too seriously when it comes to prognosticating. Many things can happen between mid-April and early-September. It’s just this time, there’s no Treylon Burks coming back. Which means that same, familiar feeling of guaranteed production that filled the last two off-seasons is also gone. In its place comes some anxiety, which is only natural given Burks’ place among the Razorback greats.