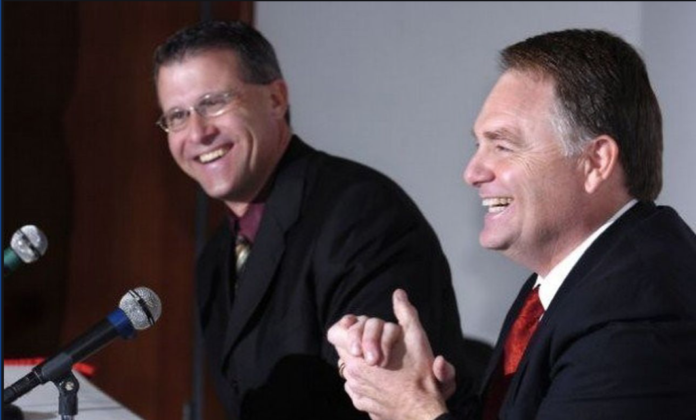 Long before Auburn gave a whack at turning Bryan Harsin into the next Urban Meyer, Harsin was a backup quarterback learning his craft under Houston Nutt.

Now, Auburn is taking a risk on the 44-year-old Idaho native in the same way that Florida took a risk hiring the young Urban Meyer from Utah in 2005. Harsin, after seven years of leading Boise State, is the SEC’s latest attempt at finding someone who can knock conference king Nick Saban off his throne.

Though Harsin and Meyer were both highly successful at mid majors in the West, neither had deep ties to the South. Harsin spent a year as the head coach of Arkansas State after two years as offensive coordinator at Texas, while Meyer hadn’t spent any time south of Kentucky before arriving in Gainesville and ultimately leading the Gators to two national titles.

Harsin’s ability to maximize talent by recruiting to a relatively geographically remote area, hire strong assistants and win at a steady rate with productive offenses while adapting schemes to personnel are also qualities shared more recently by Eric Musselman while he was head basketball coach at Nevada.

Those are big reasons why Hunter Yurachek, the Razorbacks’ forward-thinking athletic director, hired Musselman to replace Mike Anderson in April of 2019. Nearly eight months after that, Yurachek also interviewed Harsin to become the Razorbacks’ next head football coach.

During that search, Yurachek and his athletic department team contacted Houston Nutt as a reference and it’s almost a sure thing they would have asked about Harsin.

Before Frank Broyles hired Nutt as the Razorbacks’ head coach heading into 1998, the only season in which Arkansas won its first eight games as an SEC member. Before that, Nutt burst onto the national coaching scene at the helm of Murray State and Boise State.

In 1995-96, Nutt led Murray State (then Division I-AA) to a total record of 22-3, parlaying that success to his I-A head coaching job at Boise State. The Broncos were then coming off a 2-10 season as its former head coach Pokey Allen battled cancer. Nutt’s job was to breathe life in a struggling program and he partially did that, going 4-7 but winning the big one by knocking off archrival Idaho for the first time since 1981.

“We loved Boise State,” Nutt recalled on the “Kingdom of Pod” podcast. “I loved, of course, the beauty, the mountains.”

It took a while for players to acclimate to Nutt’s rah-rah personality. “When I first got through the first week set, some of the players were looking at me cross eyed, like, ‘Is this guy for real now? He comes in bouncing every day with this attitude that everything’s great, everything’s good, and we’re going to go full speed.’ But it didn’t change. We didn’t change. And we didn’t move away from that.”

Among those players was Boise native Bryan Harsin, then in his third year with the Broncos. Harsin barely saw the field, with no pass attempts and just a single rush for two yards that season, but he impressed Nutt nonetheless.

“Nothing but integrity, character, leader, studies film from daylight to exhaustion and he cares about his players,” he told CBS Sports Radio’s Damon Amendolara. “You can see it. The way he treats his players, the way he demands effort and attitude is just absolutely phenomenal. They follow this guy and you can see it.”

When Arkansas, where he’d played and coached, came calling he knew he had to answer.

“I would’ve never left Boise after 200 and some days if it was just another job. I wouldn’t have done that. But that was home. That was Arkansas, and I know it’s tough for some of my players to even understand at that time, because change is hard.”

Although many college football fans would find it hard to believe now, at that time Nutt was considered to be one of the most creative offensive thinkers in the game according to one of his former Oklahoma State colleagues, Dave Wannstedt.  “He was just breaking into the coaching ranks and he had one of the most innovative offensive minds of anybody I’ve ever been around,” said Wannstedt, then the Chicago Bears’ head coach, in December 1997.

Ironically, eight years later, Nutt hired an offensive coordinator from the high school ranks who would far surpass him in reputation as an offensive mastermind: Gus Malzahn. But a conflict with Malzahn caused a rift in the Razorback football program that ultimately fueled Nutt’s resignation while sparking a path by which Malzahn would end up as the Auburn head coach Harsin is now replacing.

Despite the opportunity to jump ship for Nebraska, Nutt doesn’t regret staying at Arkansas. He had found a good place in his home state and wasn’t antsy to leave. In an early December 2020 interview, while Harson was still coach at Boise State, Nutt told Broncos podcaster Jeff Caves he would advise Harsin along the same lines.

“One thing I would say to Bryan, if I was sitting here with him on this call, I’d say, ‘Brian, be slow. Be real slow about making that move. You’re in a beautiful place. You’re at a great place. You get paid well. You got a chance to win and win championships.’”

He added: “Bryan is so talented. I love his demeanor. I love his imagination, creativity on offense, and the way he puts together a team, offense, defense, special teams. So he’s going to have choices, but I would just caution him to say, “Don’t rush it and don’t jump too fast because you’ve got a good place.”

But Nutt also said he understood if Harsin decided to leave to pursue a chance to win a title at a higher level.

Can Bryan Harsin Recruit in the SEC?

In 2019, the fit wasn’t right behind Arkansas and Harsin. Some of that might have been the Chad Morris factor.

Before coming to Arkansas in December 2017, Morris had only been a head coach at the mid major level with SMU. He wasn’t a proven commodity in leading a high major program nor did he have a track record of recruiting in the shark-infested waters of the SEC.

One likely reason Yurachek hesitated to pull the trigger on Harsin was his lack Power 5 experience in the SEC specifically. Yurachek couldn’t afford to strike out twice using the same hiring tactic of fishing from mid majors (even though he only signed off on the Morris hire).

Yurachek ended up with a great fit in Sam Pittman, who has been the steady hand the Hogs need. While Pittman also lacked the Power 5 head coaching experience, he has made up for it with an outstanding ability to recruit elite assistants and his own ample SEC recruiting and assistant coaching experience.

If Harsin can show the same kind of hiring acumen Urban Meyer showed coming out of Utah, he’ll be in a great position. Arriving in Florida, Meyer only retained on Florida assistant (Arkansas native Charlie Strong as co-DC) while he brought in a team of assistant who had mostly cut their teeth outside of the SEC:

Still, for every Meyer, there’s a Chad Morris on the opposite side of the spectrum. Harsin’s lack of experience at this level is why 247Sports analyst Josh Pate says Auburn didn’t achieve what they needed in their coaching search.

“I don’t think [Harsin] is a definitive upgrade,” Pate said on the “Morning Rush” sports radio show. “And that should be the underlying criteria, unless there’s scandal involved, which there’s never been a whiff of with Malzahn, by the way, unless they’re scandal involved, there should never be a change made at the head coaching position in the SEC or elsewhere, unless you have a definitive upgrade.”

“There’s this big misconception in major college football, that if you have average results, it can only go up. That’s not true. When you’ve got average results, there’s just as much room to go down as there is to go up.”

Pate added Auburn decided to go with Harsin instead of the more widely reported candidates like Billy Napier and Brent Venables because those other candidates “were turned off by the notion that was put in their head by Auburn powers to be, that there were going to be a couple of prerequisites staffing wise. They were going to have to sign off on or agree to, and it was going to involve people either being retained or guys being put on their staff.”

One can safely assume that one such person is defensive coordinator Kevin Steele, an apparent favorite among Auburn boosters. One can equally assume Chad Morris, now Auburn’s offensive coordinator, isn’t a favorite among boosters after the way the Tigers’ offense tanked this season despite the rise of a tailback star by the last name of Bigsby.  Although Morris’ performance may not be enough to dissuade LSU’s Ed Orgeron from giving him a look, however, according to message board chatter.

Staff hiring requirements, which Auburn athletic director Allen Greene has denied, are “not going to fly with most legitimate coaches,” Pate added.

“Now, either Bryan Harsin agreed to those terms, or Auburn got desperate and said, ‘This is not going to work. No one’s going to agree to this.’ And they changed those terms. And if that’s the case, and the guy that’s hiring his own staff, then it’s game on.”