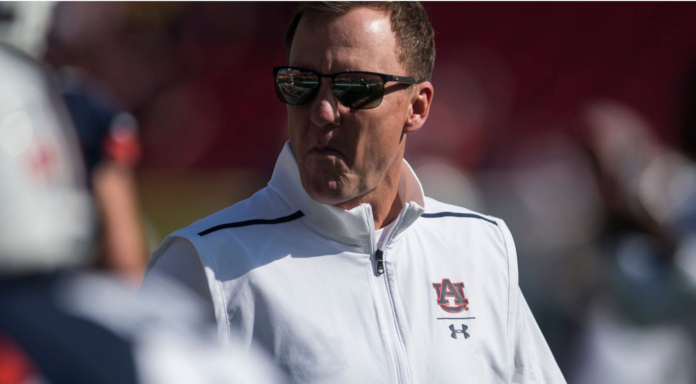 The nail that would seal the coffin of Gus Malzahn’s run as Auburn’s head football coach was well on its way before Chad Morris arrived. Heading into the 2020 season, Malzahn was already struggling against the creme of the SEC crop, losing 26 of its previous 49 conference games, including all ten of the most recent road games it had played at LSU, Georgia and Alabama.

Morris, it turns out, simply brought the hammer down. Three hundred and sixty eight days after Malzahn hired his friend to juice up a hurry-up offense that was losing steam, Auburn director of athletics Allen Greene fired Malzahn.

The move is surprising — not because Auburn dropped the ax, but that it did so amid a pandemic in what were supposed to be cash-strapped times. Auburn now owes Malzahn a buyout of $21.7 million, 50% of which is due in the next 30 days.

Going into the season, Auburn had dreams of contending for an SEC championship after a promising freshman season from quarterback Bo Nix. Chad Morris spoke about helping Bo Nix reach his goal of being the best to ever play the position.

But Auburn’s offense failed to take the step forward that Malzahn expected. In fact, it regressed. Auburn paid Chad Morris $735,000 to do this in his lone season as the Tigers’ offensive coordinator:

In the season finale, against a two-win Mississippi State team, Auburn had only 178 yards and three field goals through three quarters before getting on track at the end.

Malzhan was so happy to escape with a win, pushing Auburn’s record to 6-4, that he showed off the same moves Chad Morris had taught him from Arkansas’ failed ‘Club Dub’ experiment in 2019:

I wanna hear Auburn prez Jay Gogue say, “I was all about keeping Gus as coach and our program not having to pay him $21.5 million to go away, but then I saw that video of him dancing in the locker room after that awful game with Mississippi State last night and I threw up.”

The kind of camaraderie Auburn showed in the locker room was sorely lacking on the field earlier this season.

Issues similar to the ones that plagued Arkansas in its two years under Morris flared up in Auburn during Malzahn’s eighth season there. After Morris was fired from the Hogs in November 2019, there were revelations about his inability to communicate well with his players. Too often, he simply seemed too jittery and on edge — like he was on the brink of a Red Bull-fueled breakdown.

See how a lack of composure ran rampant through the Auburn sidelines in the below footage from Auburn’s loss to what turned out to be a horrible South Carolina team:

Some frustration on Auburn's sidelines after that last offensive possession. Chad Morris trying to be the mediator between Bo Nix and Seth Williams.pic.twitter.com/ve1NWgRoVv

“There’s a difference between a competitive argument and being disrespectful,” said Jake Crain, an Auburn-focused analyst of the SEC. “Bo [Nix] looked at Chad and said ‘They know the f-ing play,’ or ‘They know what we’re f-ing running.’ He just screamed that to him. And what did Chad Morris do at Auburn? Nothing. And it shows me that there’s no fear of repercussions on anything. That’s what it looks like. But when you can have players talk to coaches like that consistently… from your quarterback, from your leader?”

Then you might as well kiss true team unity goodbye. Just like Auburn can say goodbye to Morris now that Malzahn’s out. He is a guaranteed goner.

If he wants to keep working, he could return to the high school ranks next season, or perhaps return to Clemson as an assistant (“special” or otherwise). But he doesn’t need to work again for a while. While the last three years have been the worst in Morris’ career, they have also been the most lucrative. Arkansas owed him a buyout of $10.1 million last winter and paid him $1,715,000 of that this past season alongside his Auburn salary.

On Sunday, USA Today’s Steve Berkowitz Tweeted that Morris, if fired from Auburn, “will be owed a buyout of around $900,000, although — unlike Malzahn — Morris will have duty to mitigate, with the buyout being offset by future income.”

Wherever he ends up next, he would do well if this time he takes a deep breath and thinks before spouting off about Deshaun Watson, mind-blowingly high-octane, turbo-charged production, left lanes, full tilt boogies, hammering down and all manner of what Arkansas and Auburn fans now clearly see is blatant nonsense.

"This will be one of the most explosive offenses in all of college football." pic.twitter.com/9u7GqPfrPY

Doesn’t age well at all:

More than a month ago, Alabama’s largest newspaper did one of those puff pieces that is commonplace during fall camp, before axes fall and heads roll.

The AL.com feature chronicled how, just weeks after Morris had been fired at Arkansas, he found himself in Auburn hired by his friend Gus Malzahn as the Tigers’ offensive coordinator.

Nix, who’d just finished a promising freshman season, replied he not only wanted to be great — he wanted to be the best who ever played.

The rest of the profile goes on to frame Morris as a coach who is capable of making Nix’s dream come true. It brings up all those old stories of Morris’ now-ancient success with quarterbacks, guys like Garrett Gilbert from Lake Travis High School, G.J. Kinne at Tulsa and Deshaun Watson at Clemson.

Al.com’s Tom Green even tracked down Ben Hicks, the former SMU quarterback who essentially crashed and burned as a Razorback in 2019, his only season at Fayetteville.

Morris then explains how he teaches the fundamentals of quarterback play from the base up. Malzahn, Auburn’s head coach, added that he’d just hired a great teacher — because why wouldn’t he? Morris’ job was to come in and jumpstart an Auburn program that had won only 26 of its last 49 SEC games, and lost all ten of the most recent road games it had played at LSU, Georgia and Alabama.

Cue the massive eye rolls across all of Arkansas.

And, now, four games into an increasingly disastrous season, the same is happening across the Auburn fan base.

They have seen that Morris is not making Malzahn’s offense better, and apparently has lost the QB guru touch that Clemson quarterbacks and coaches from the past keep Tweeting about.

Last in completion percentage among SEC quarterbacks, Nix has regressed this season — just like Ben Hicks and Nick Starkel both regressed under Chad Morris in 2019. It’s been a major reason Auburn is 2-2, but really should be 1-3 if not for a gift from the referees against Arkansas.

Arkansas fans know the feeling. For nearly two years, they were promised things involving hammers going down, and a turbo-charged something or other. In the end, Morris promised the moon and delivered a piece of charcoal.

It’s going to be a long, painful season for Auburn.

It does seem Gus Malzahn is destined to be fired soon if this keeps up. According to Crain, who has a few sources in that program, it’s about 80% that Malzahn is a goner this fall.

Hear more about Morris, Malzahn and Arkansas from Crain here:

Man, That Jeff Long Sure Could Pick ‘Em