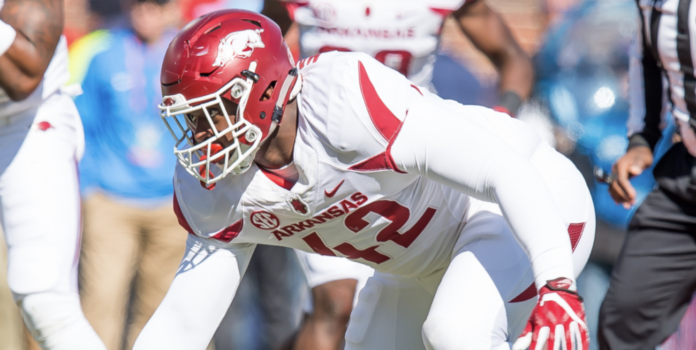 In a season in which the SEC had no problem robbing Arkansas of at least one win, perhaps it should be no surprise that the injustices extend to postseason honors announced on Tuesday, too.

Jonathan Marshall is the Razorbacks’ best defensive lineman this season, and clearly one of the best linemen in the SEC.

That’s why Marshall was named to Pro Football Focus’ first team All-SEC after tallying 35 tackles, 6.5 tackles for loss and one sack this season. The outlet Pro Football Focus grades players by position based on traditional and advanced stats, and Marshall regularly graded out as among the best conference’s linemen.

“Marshall’s 29 pressures (which included 19 hurries and nine quarterback hits) leads all SEC interior defensive lineman, as do his 22 ‘stops’ – tackles that constitute a ‘failure’ for the offense,” Andrew Hutchinson wrote for HawgBeat.com. “The result is an SEC-high 80.8 run defense grade and an overall 79.6 grade, which ranks second – behind only Alabama’s Christian Barmore – among the 21 SEC interior defensive lineman with at least 300 snaps this years.”

However, Marshall wasn’t named to either of the recently announced All-SEC teams. Granted, these are voted on by the league’s coaches, not SEC referees, but that doesn’t diminish the fact that Arkansas was overlooked once again.

Pro Football Focus ranks Marshall as the second best interior defensive lineman in the SEC, yet he was not one of the eight defensive linemen either All-SEC team.

It seems the SEC coaches (who are not allowed to vote for their own student-athletes) instead went with players who produced more highlights or were more physically impressive than the 6-3, 317-pound Marshall.

It is a mystery how Jordan Davis made the team over Marshall. He racked up a whopping 4 solo tackles and did not record a sack or any turnovers. Jonathan Marshall only got 20 solo tackles, a sack, and he forced a fumble.

Sure, Georgia had a great team run defense, but individually Marshall beat Davis in traditional stats and in his PFF grade.

Marshall wasn’t the only Arkansas player to get the short end of the stick. Safety Jalen Catalon statistically destroyed LSU’s Derek Stingley, the first team all-SEC selection, while Catalon was chosen as a second-team player.

Catalon racked up 99 tackles, including 51 solo tackles which both led all SEC defensive backs and were top 4 totals among all defenders in the conference (he was 4th in the SEC in tackles, but only 3rd on the Razorbacks). He was tied for fifth in the SEC with 3 interceptions, 4 pass breakups, and forced 2 fumbles.

“With a 79.4 overall grade, he ranks second among all SEC safeties and is just behind Alabama’s Jordan Battle (80.1),” Hutchinson wrote. “Catalon is excellent against the run (79.0 run defense grade) and the pass (80.7 coverage grade).”

He also more than passes the eye test, as these 2020 highlights show:

Compared to Catalon, Stingley’s numbers are minuscule. He had 27 tackles (19 solo) a forced fumble and no interceptions. He did beat Catalon in pass deflections by one, with 5.

In fact, Florida’s Kaiire Elam led the first-team DBs with 39 tackles and 28 solo tackles. Catalon’s 4 forced turnovers is also more than any player on the first team.

Jalen Catalon has the stats and PFF grades of a All-SEC first team player, but has to settle for second-team and all-freshman. But at least he was on a team, unlike Marshall.

Granted, the SEC coaches did get it right when they put Grant Morgan, the Hogs’ eternal warrior of a linebacker, on the first team. They also put receiver Treylon Burks and linebacker Bumper Pool on the second team, as deserved.

But Marshall and Catalon deserved better SEC award finishes, as the non-biased Pro Football Focus numbers clearly show. This is just the latest in a long line of “little brother” treatment for Arkansas from SEC referees and coaches alike.

Speaking of little brothers, check out Grant Morgan’s thoughts on the honor below: