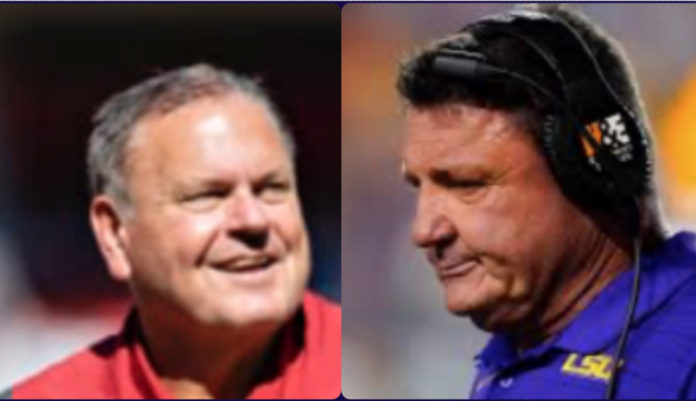 Just two seasons ago, Ed Orgeron and LSU football were on top of the college football world. Entering their 2019 matchup with Arkansas in Baton Rouge, the Tigers were ranked No. 1 in the country and were two weeks removed from a seismic win against No. 3 Alabama on the road.

It didn’t stop the bleeding. In that 2019 meeting, LSU routed Arkansas 56-20 and later capped off the season with a national championship and case for the best college football team of all time.

Fast forward to today, though, and the programs’ trajectories appear to have nearly flip-flopped.

LSU is 4-5 this season and already announced that they will be parting ways with Orgeron at season’s end. Meanwhile, Sam Pittman has Arkansas bowl eligible after beating No. 17 Mississippi State last Saturday, marking the third time Arkansas has beaten a ranked team this season.

What caused LSU’s rapid fall?  And, as the Arkansas football program rises, what lessons can be learned from the Tigers’ tumble?

LSU’s struggles since winning their 2019 championship have been well documented. Unlike most firings, Orgeron wasn’t let go solely because of results on the field or a single off-the-field scandal.

Instead, it was a combination of subpar results and several non-football related issues that led to the firing of college football’s second-highest paid head coach.

To begin with, Orgeron wasn’t the most popular choice as head coach when he was promoted from interim after the 2016 season. Many fans took to social media saying they viewed the hiring as LSU taking the cheap route to replace Les Miles.

It didn’t take long, though, for fans to warm up to Orgeron as he started winning. This culminated in one of the most impressive seasons in college football history in 2019. The Tigers, led by a Heisman trophy quarterback in Joe Burrow and plethora of pro-level talent, dominated their schedule and won the national championship.

However, as the championship high wore off and reality set in things began to unravel in the bayou.

Orgeron hired former Dallas Cowboys offense coordinator Scott Linehan and brought Bo Pelini in for his second shot as LSU’s defensive coordinator, which turned out to be disastrous.

Pelini and Linehan were each let go after just one season in Baton Rouge.

Orgeron was also tasked with having to replace 14 key players from the 2019 team who were selected in the 2020 NFL Draft, along with 10 other players who left the program that offseason.

If player and staff turnover wasn’t enough, off-field issues had begun to emerge in summer of 2020.

Throughout 2020 athletes took part in protests and marches against police brutality and social injustice across the country. Several Arkansas players and staff, including Sam Pittman, took part in a peaceful protest in downtown Fayetteville.

In Baton Rouge, LSU players planned to stage a march across campus as a peaceful protest. Two weeks before the march, Orgeron would appear on Fox News and praise President Trump for the job he was doing.

This didn’t sit well with LSU players who felt it went against what they planned to protest just two weeks later.

Fast forward to the protest, Orgeron was not in attendance as players marched to the school president’s office. He showed up at the end with LSU Athletic Director Joe Woodward, and addressed the team in a meeting that night.

Ross Dellenger of Sports Illustrated, who went in detail on Orgeron’s exit from LSU here, said nearly every source he spoke to pointed to this situation specifically as being a real turning point for Orgeron’s favor amongst players, fans and decision makers.

Another off-field issue that became a distraction was Orgeron’s dating life.

A month after the national championship, Orgeron filed for divorce after 23 years of marriage. This started as a non-story but evolved into fuel for fans to poke fun at Orgeron’s dating life.

It isn’t a complete surprise his dating life would become public, seeing as though he had always fancied himself as a lady’s man dating back to his time on as an assistant on the Razorbacks’ coaching staff early in his career.

However, this time it seems it was affecting his professional life negatively.

There was a picture of him with a woman, which appeared to be taken while they were in bed together, and it went viral on social media.

There were reports of him bringing numerous girlfriends to LSU practices. In some instances, the girlfriends who had children would bring them to practice and the kids would participate in drills with the team.

Then, there was the report of Orgeron hitting on an LSU official’s pregnant wife at a local gas station.

If that wasn’t enough, in June of this year Orgeron was officially named a defendant in a Title IX lawsuit. The suit claims that Orgeron didn’t report an alleged rape of a female student by former LSU running back Darius Guice.

The cherry on top of the multitude of off-the-field distractions, was that LSU has gone 9-10 since winning the national championship in 2019. He may have been able to keep his job if the team kept winning, but losing coupled with these issues made it easy for LSU’s decision makers.

The fall that LSU football has experienced since 2019 provides a lot of lessons for other major college coaches.

First, in order for Pittman to keep the Razorbacks on the rise as a program, it’s essential to keep building a solid foundation and culture within a program to best avoid huge problems, such as the Title IX lawsuit at LSU.

Coaches can’t be with their players 24/7 to make sure their making the right decisions in every situation. They can, however, make sure players understand there is zero tolerance for things like sexual assault and hold their players accountable for mistakes.

Regardless, it’s imperative that coaches remain vigilant and proactive on these types of issues.

A big part of that is better educating their players on issues involving sexual assault. Sadly, the NFL has many examples of players (e.g. Deshaun Watson, Darren Sharper) nearly losing everything because of sexual assault. Coaches should lean on these examples to show players how serious the consequences are.

They also need to have systems in place that take allegations and the reporting of them seriously and use these systems regardless of who is involved.

It’s also important coaches don’t just talk the talk about supporting players in other parts of their lives, but walk the walk.

Well, it sure wasn’t at LSU.

Sam Pittman showing up to support his players and staff in their peaceful protest last year offered a glimpse at the kind of coach he is. These players hadn’t played a down for him yet, and he still showed up.

That shows that he’s going to stand behind his guys and support them whenever he can. That’s a good thing and something that should be commonplace everywhere.

The final lesson involves the handling of staff turnover.

Failing to replace great assistants with coaches of the same caliber cost Orgeron at LSU. It also was a big reason that Bret Bielema’s tenure ended at Arkansas.

Ironically enough it was Pittman leaving for Georgia that stands out as the biggest losses during the Bret Bielema era. However, there were some other big losses that Bielema just couldn’t adequately replace.

After one season as Arkansas defensive coordinator, Chris Ash left the program for the same position at Ohio State at the end of 2013. He hired Robb Smith to replace him, which led to a successful 2014 season, but the defense regressed over the next few seasons.

Defensive line coach and heralded recruiter Charlie Partridge also left after one season. To replace him was Rory Segrest, who is now the defensive line coach at Louisiana-Lafayette. He was able to recruit 4-star Bijhon Jackson and 5-star McTelvin Agim to stay in-state, but aside from getting those two, it was a very average tenure.

Sam Pittman, then Bielema’s offensive line coach, left following the 2015 season. Bielema, in turn, hired Kurt Anderson who was an assistant offensive line quality control coach with the Buffalo Bills. Under Anderson, the offensive line regressed each of his two seasons.

The only major hire that couldn’t be looked at as a total downgrade was replacing Jim Chaney with Dan Enos at offensive coordinator in 2014. Enos’ offense had its moments, but left a lot to be desired.

In retrospect, those replacement hires were missteps that ultimately resulted in Bielema’s firing. The same thing happened at LSU, albeit much faster, when Ed Orgeron replaced Brady and Aranda with Linehan and Pelini as coordinators.

Finding the right staff to surround yourself with is extremely important. With Kendal Briles and Barry Odom popping up in talk about head coaching vacancies, it’s only a matter of time before one or both will need to be replaced.

When that time comes, it will be extremely important that Sam Pittman is able to get it right again. He’s already had to make a couple of replacement hires after offensive line coach Brad Davis left for LSU and wide receivers coach Justin Stepp left for South Carolina.

He hired Cody Kennedy and Kenny Guiton for each respective coaching position, and so far, things have gone relatively smoothly. The offensive line, especially, has come along strong as of late.

Pittman’s true level of skill, however, will become apparent when he needs to start replacing his coordinators. Bad hires in this department can expedite a head coach’s time at a program, especially in the pressure cooker SEC West.

Even if you’re only two years removed from reaching the pinnacle.

Check out his Arkansas vs LSU preview: