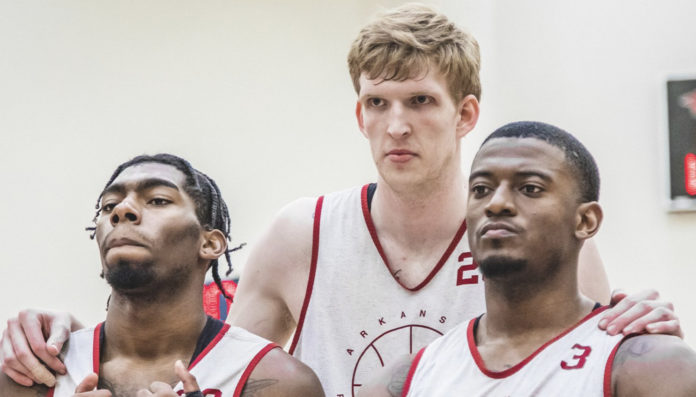 The Arkansas Razorbacks will debut their third season under head coach Eric Musselman in Bud Walton Arena where they will face the Mercer Bears. The Hogs and Bears have met on five other occasions dating back to 1981 with Arkansas holding a 4-1 series record.

With Bud Walton Arena sold out for all 2021-22 games, excitement for Razorback basketball has reached its highest level of the 21st century. The Hogs are coming off of their best March Madness finish since 1995. In terms of experienced Hogs, although Arkansas returns only 38.5% of the overall minutes logged in 2020-21, they are still expecting to compete in a talented SEC thanks to an influx of talented transfers. The Mercer Bears, meanwhile, are coming off a 18-11 finish and look to improve in what is head coach Greg Gary’s third season at the helm.

When Mercer Has the Ball

While the Bears did lose three of their top five scorers from a season ago, they return their leading scorer in Neftali Alvarez. The 6’2″ junior guard is coming off of a successful season where he averaged over 13 points per game despite shooting only 31% from deep. When Alvarez is not scoring you can expect him to try and get the ball to forward Felipe Haase. Haase enters his senior season looking to improve on a junior campaign where he averaged just shy of 12 points per game.

Mercer put together a good season last year, but they did not impress in one area in particular. Instead, they won games by avoiding poor efficiency on either side of the ball. Mercer enters the year with the projected 154th best offense in the country, according to Kenpom.com. This middle of the pack group can score from multiple levels while moving at an average pace. One area the Bears thrived in last season was effective field goal percentage where they made 54.3% of attempts, good for 30th in the country.

Unfortunately for Mercer, they will have to go up against a formidable Razorback defense that finished last season with a top ten defense in the country, per Kenpom.com. Last season, the  Hogs focused on speeding up the opposition while contesting shots. Eric Musselman and his staff will work to implement a similar approach this season with a new group. Expect Mercer to struggle to score against a revamped Arkansas defense built with athleticism and length. If Mercer hopes to hang around in their season opener they will need to establish a presence down low and knock down difficult shots in a lively, packed Bud Walton Arena.

When the Razorbacks Have the Ball

Similar to Eric Musselman squads of the past that served as trailblazers for the new transfer market trend in college basketball, there is not a shortage of question marks entering the season. The Hogs will miss the play of numerous contributors, namely Moses Moody and Justin Smith. As expected Eric Musselman did not wait around to reload the roster with talent. The Razorbacks bring in one of the best transfer classes in the country. The list features players mainly known for their offensive prowess. Look for transfers Chris Lykes, Stanley Umude, and Au’Diese Toney to jump right into the action in the first game of the season.

With these additions the Razorbacks hope to build on a decent offensive effort from last season where they finished 43rd among all offenses, per Kenpom.com. The Hogs will likely run the offense through multiple ball handlers this season featuring Chris Lykes and returning SEC 6th Man of the Year, J.D. Notae. To the pleasure of Arkansas fans, fan favorite Devo Davis will see an expanded role after a fantastic finish to his freshman season last year.

The Hogs will go up against an uninspiring Mercer defense who projects to be the 225th best defensive squad in the country. While you can expect the new look Hogs to score in bunches, it is unlikely they will match last year’s season opening performance where they scored 142 points against Mississippi Valley State. Razorback basketball fans should also expect to see multiple rotations throughout the game as Musselman experiments with all of the new pieces.

So, what can fans expect in the season opener? The Hogs enter as 19-point betting favorites to get their campaign underway and the analytics back it up. Kenpom projects a 20 point victory, 86-66, while Haslametrics sees the Hogs winning 81-66.

The Razorbacks should control this one from the start. Expect Musselman to push for as large of a lead as possible in the first half so he can then test out different lineups, players and tactics with his new team.

Mercer will try and push the ball down low to Felipe Haase to challenge the less proven, interior part of the Hog’s lineup, but Arkansas will likely be too much athletically for the Bears to handle for 40 minutes in Bud Walton Arena.

How to Watch Arkansas vs Mercer

See our most recent post about the Arkansas basketball schedule here:

Get a good look at the new Razorback basketball transfers here: