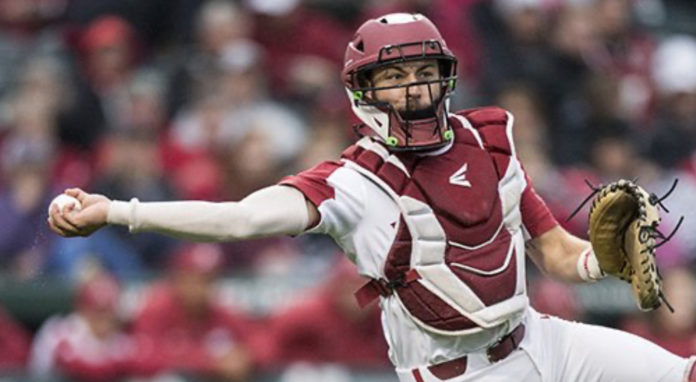 Arkansas baseball has been a force in college over the last few years and that dominance has translated into the MLB as well. In the 2021, nine former Razorbacks played in the Majors. Twenty seven more are working their way up through the minor leagues.

Some of those players are close to breaking through and becoming Major League Baseball players. We profile eight of them below. Before that, though, we start with a rookie who is looking to build on an impressive start:

Pitcher Trevor Stephan made 43 relief appearances with the Cleveland Indians, producing a 4.41 ERA in 63.1 innings. He converted his only save opportunity and struck out 75 opponents.

Stephan only pitched one season for Arkansas in 2017 before being drafted in the third round, 92nd overall. He started 16 games with a 2.87 ERA and 120 strikeouts. At the time, that was the fifth-most by an Arkansas pitcher in a season.

There are also five former Arkansas baseball players in Triple-A, one step from reaching the MLB. They could all see their name being called in 2022 and impact their organization.

2021 eighth round pick Casey Opitz was called up to Triple-A at the end of the season. Opitz hit .250 across three levels of baseball and had an equal number of walks and hits with 14.

Opitz is rapidly ascending the ranks due to his defense however. He was a pro-level catcher for the Razorbacks baseball program in the past few years and the Chicago Cubs like the way he works with pitchers and calls games. Baseball America touted his defense in their scouting report and noted what’s holding him back.

“Opitz does everything scouts want to see behind the plate. He’s an excellent catch-and-throw catcher with arguably the best arm in the draft class,” Baseball America reported before the draft. “Opitz regularly records plus-plus pop times. He has thrown out 43% of base stealers for his career, and his presence has largely led some teams to shut down their base stealing when he’s at work. He works well with pitchers and shows excellent ability to block balls in the dirt. So why has a catcher with above-average defense and a plus-plus arm struggled to gain traction with scouts? It’s the bat.”

Casey Opitz will be in the Major Leagues sooner than later as the Cubs backup catcher. He will play behind Willson Contreras who happens to be a somewhat opposite skilled player to Opitz. Contreras is one of the better hitting catchers but is held back by his receiving and framing abilities, while both catchers have very good pop times and strong throwing arms.

Once Knight adjusts to the hitters in Triple-A he should get the call. He has the talent and the Baltimore Orioles organization needs a spark in the rotation, having only three pitchers who recorded 100 or more innings in 2021. Two of the three pitchers had ERAs above six.

“For me, I think it is another motivation piece. If I go and do my job well, I’ll be able to take care of him and my wife for a long time,” Knight said on Glenn Clark Radio Aug. 12. “They’re not going to have to struggle for anything and do any of that. It’s another motivation piece for me, especially when it’s getting to the latter half of the season and we’re all tired and sore and everything else. I’ve got to keep grinding and keep plugging away at this thing because it’s a very good end result if I do make it all the way up.”

Brett Eibner has already gotten a taste of the majors. He was drafted as an outfielder in 2010. He got called up to the Kansas City Royals in 2016 and played for three teams over two years in the MLB, going up and down.

In 2018, Eibner was back in the rookie league as he transitioned to being a pitcher. The former Arkansas baseball star has worked his way back up to Triple-A in the three years since. He posted an impressive 3.46 ERA in 2021 and may find himself with the Miami Marlins in 2022.

Jackson is in his second stint in Triple-A. He pitched at that level for all of the 2019 season, posting a 3.97 ERA in 68 innings. The rotating door that is a MLB bullpen may allow Jackson an opportunity to get his foot in the door with the Oakland Athletics.

Like Eibner, Matt Reynolds has already reached the big leagues. He’s appeared in 130 games since 2016 with three different organizations. His numbers have not lived up to expectations, as he hit four home runs and 19 RBIs on a .212 batting average in 226 at-bats.

The former second round draft selection has been able to stay on the cusp of breaking out because of his production at the plate in the minor leagues. He first hit Triple-A in 2014, and has a career minor league average of .279. In his past three seasons of Triple-A,, he has hit 25 home runs and 119 RBIs in 994 at-bats.

He is in the Chicago White Sox organization, who have a lot of very talented young players, so he may struggle finding an everyday role for the near future. However, Reynolds has been consistently producing in the minor leagues, so he could put it all together at any time. Once it clicks for him, he could see himself finding a position as a role player in the MLB.

The top ProHog outside of the top two levels in professional baseball is Golden Spikes winner Kevin Kopps. He is currently in Double-A in the San Diego Padres organization. Kopps has ascended the ranks very quickly and dominated at every level.

He has allowed a lone run in 14.2 innings across three levels and struck out 22 hitters. At his current rate, Kopps will find himself coming out of the bullpen in San Diego by the end of 2022. He may find himself at Spring Training come February with an opportunity to earn his spot on the roster.

Kevin Kopps has only pitched twice in Double-A, so he may be left there to further develop, but he will likely be in the big leagues in the near future, pitching meaningful innings for a playoff caliber team.

Dominic Fletcher had an impressive 2021 season in Double-A. In 102 games, Fletcher slugged 15 home runs and 56 RBIs to go with a .264 batting average. He is in the Arizona Diamondbacks organization, which is another franchise that needs some young talent to spark the team.

This presents an opportunity for Fletcher to break through as soon as the Diamondbacks think he is ready, and he will not have to wait in line behind any star players. Ketel Marte is the current center fielder in Arizona, but a corner outfield position may become available for Fletcher in the next few seasons.

Fletcher is a solid defender with pop in his bat and a knack for driving in runs. His biggest area of improvement should be his strikeout to walk ratio which was 109:25 in 2021. Once he gets that worked out, there is very little reason to keep him in the minor leagues for much longer.

“The brother of Angels utility man David Fletcher, Dominic was one of the team leaders during the Razorbacks NCAA tournament runs,” writes Matt Thompson of Prospect Live.

“He’s a baseball rat, with a strong work ethic and his teammates love him. He falls into a bit of a tweener role for me. He lacks the footspeed for center, but is good enough defensively, his bat just doesn’t play on the corner due to his lack of power. He’s a big leaguer though.”

The 2020 second overall draft selection Heston Kjerstad is just now able to train for professional baseball after a battle with myocarditis. The heart condition has kept him out of baseball activities since getting drafted last year.

He has recently begun hitting on the field and will look to start his climb up the ranks in 2022. He currently sits in Low-A with the Baltimore Orioles organization, but if he comes back healthy, he has the talent to move up very quickly.

Heston Kjerstad has an opportunity to make a significant leap towards the MLB. It may be a stretch to go from Low-A to the MLB in a single year, but it should not be long before Kjerstad makes his push towards the big leagues.

“He’s doing well last I talked to him,” Blaine Knight said about Kjerstad. “I know he’s itching to get back. But they’re going to figure out something with him as far as being able to get him back on the field here soon I hope. That dude, he’s something else. He is something else, and I know it’s driving him crazy not to be able to play because that’s all that kid does. I mean, he eats, sleeps and breathes baseball. That’s all he does.”

A lot of talent from Arkansas is looking to make their names heard in 2022. These nine players have the best opportunity to make an impact in the near future. The Pro Hogs are looking to take over, and it would not be surprising to hear a lot of former Razorbacks’ names in the MLB in the next few seasons.