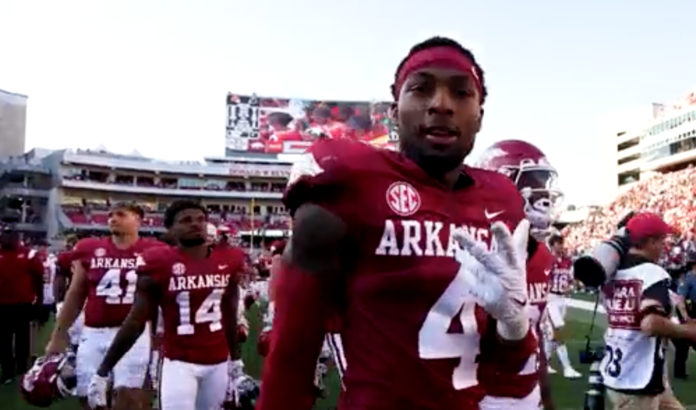 If only the report earlier in the week that the College Football Playoff would be expanding to 12 teams had read “beginning this season.”

Arkansas football can’t get too big for its britches yet, but it’s sort of hard not to look ahead to the potentially superb season the Razorbacks could have in 2022 after their season-opening win against Cincinnati on Saturday, 31-24.

Both teams entered ranked in both polls. The Bearcats had a slight edge in the coaches poll, but Arkansas was ahead in the Associated Press poll, which is largely considered the poll of record. A win over a fellow Top 25 team is a boon no matter how it’s sliced, but especially for an Arkansas team eager to prove last year’s 9-4 record was no fluke. And you’ll have to pardon them, as such. I mean, this is a program not exactly far removed from the worst two teams in its modern era.

Saturday’s win wasn’t pretty. Like, at all. But it had moments of beauty. KJ Jefferson’s legs can still dance and glide. Trey Knox can do the grunt work – he knocked a defensive lineman coming at him full speed on his behind – and the sexier run-after-the-catch. Rocket Sanders finds holes. Dwight McGlothern’s step in front of a pass was textbook. Jadon Haselwood’s touchdown grab moreso.

Jefferson accounted for all four of Arkansas’ touchdowns. Three through the air, including two to Knox, and another on the ground. However, at least three of his eight incompletions (he had 18 completions, in fairness) were so off-target to elicit audible reactions in the press box. He made a dangerous spin move near his own goal line that nearly resulted in a safety and he fumbled the snap on his own 3, too. Toss in two penalties – of Arkansas’ seven – that resulted in big gains for first downs being called back, plus a handful of blown coverages and missed tackles, and Pittman’s words come to make all the sense in the world.

Yet Arkansas, a team with one of the worst records in the SEC in all the years since the Bobby Petrino motorcycle crash, beat a Top 25 team. With all the errors, mental and physical, Arkansas had the talent and wherewithal to knock off a team one season removed from being the first-ever school from a non-power conference to make the College Football Playoff.

If the College Football Playoffs were expanded this year, the Razorbacks would have to be in the conversation. Saturday showed that. Perhaps not at the top of the hierarchy, but given Arkansas plays the toughest schedule in the nation – this is the SEC, after all – the opportunity would be there right now.

Perhaps it’s a good thing, though. Arkansas fought through some messy moments Saturday, proving fortitude, but they’re still growing in their coach’s image. This is only Year Three of the Pittman era. Had he walked into a situation with more solid footing in his first year and made the same amount of progress by now, perhaps a Top 10 ranking would be a worthwhile conversation to have about expectations. Then again, such a standing isn’t that far out of the question right now given Arkansas briefly tasted such glory heading into last year’s Georgia game. Still, Pittman’s press conference comments point to something larger. He felt good about beating the Bearcats, but not great. He knows his team has a long way to go.

“Made some first-game mistakes we have to clean up. Those are my fault,” Pittman said. “I’ve got to do a better job of paying attention to some of the things there. But we needed everybody today and proud to be 1-0.”

That’s all it takes right now. Win one. Win another. Like coach Lou Brown says, that’s called a winning streak. And considering the next time out is against a program looking to put itself on the Pittman-like path in a return to relevance in South Carolina, those baby steps are a good start.

The Gamecocks are the sort of team who can play spoiler. They’re not a scary team in the traditional sense, the way the elites of the SEC are. But they’re also good enough to put the hurt on an opponent who doesn’t bring its A-game. Arkansas likely won’t have its ‘A’ roster when the teams meet, either. Nickel Myles Slusher was lost late in the second quarter with an undisclosed injury and didn’t return. Early in the third quarter, Jalen Catalon, a preseason All-SEC first-teamer, left, too, and didn’t come back. Pittman suggested Slusher will be good for the game against South Carolina. His lack of clarity regarding Catalon’s injury, though, leaves doubt.

Arkansas won without them for a bulk of the second half, regardless. The Razorbacks’ icing of the game, milking the final 5:49 off the clock, leading by a single score and with Cincinnati having two timeouts remaining – that’s big-league stuff. It’s the sort of stuff teams contending for the College Football Playoffs, whether of the 4 or 12-team variety, have to do against good teams.

Alas, it’s fun to dream, fun to imagine what could be, even if it isn’t a reality just yet. It’s easy to imagine if things continue trending in the direction they are now, Arkansas will be in the real conversation when the expansion happens, anyway. Clean up some of the messy play from Saturday, and get lucky in terms of staying healthy, and getting into that conversation won’t even need to wait till expansion.