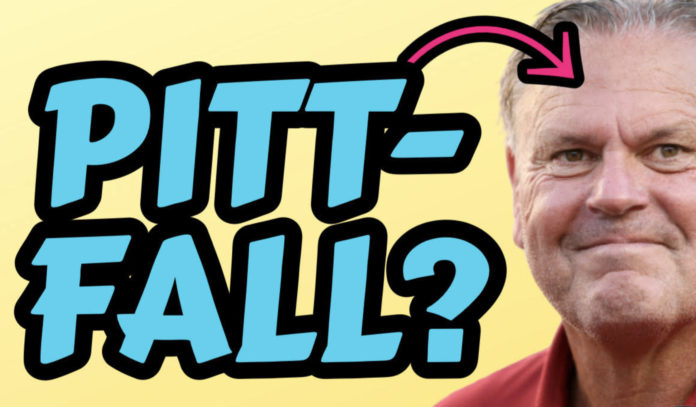 There’s little arguing with the fact that in two seasons, Sam Pittman has almost completely overhauled to national perception from the SEC West’s version of Vanderbilt to the program with the best chance of knocking off Alabama in the regular season – despite it feeling like the Hogs have not beat the Crimson Tide since the Carter administration. That momentum was further solidified in a season-opening, seven-point win over a Top 25 Cincinnati team in Fayetteville.

Pittman clearly has the Arkansas football program trending upward, and in the first part of his third season, he has received very little criticism from Arkansas media and SEC football analysts alike. He looks all the better for coming after the last, depressing season of Bret Bielema and the nearly two years of pure nightmare fuel known as the Chad Morris era.

Carter Bryant, an LSU/SEC football analyst who for years hosted an Arkansas sports radio show in his hometown of El Dorado, also thinks highly of Sam Pittman and what he’s done for the Razorback program. Few modern coaches have the charisma to get away with talking about going home to crack open cold one after a game, but Pittman delivers that ability in spades:

But Bryant also sees what he calls a “major flaw” from the head Hog that might have cost Arkansas some big games in the last two seasons and has the potential for costing Arkansas even more wins in 2022.

Namely, as Bryant sees it, Pittman’s decision making as a head coach has been too conservative. Specifically, Pittman is too reticent to go for it on fourth down against tough competition. That was certainly borne out in the season-opening win against Cincinnati when Pittman declined to go for it on fourth-and-short yardage situations at least three times at mid-field in the first half, but in that case Pittman’s decision making looks sound. Arkansas, after all, held the Bearcats scoreless in the first half.

But Bryant points out previous situations where he feels conservative play-calling hurt the Hogs. His first example comes from 2020, when Arkansas was down 35 to 17 versus Texas A&M at the end of the third quarter. Facing a fourth down and 7 at the Arkansas 40-yard line, Pittman elected to punt.

The Aggies then marched 68 yards in 6 plays to punch it into the endzone and go up 42-17, effectively ending the game.

Of course, the next year Arkansas got its revenge on Texas A&M, so the sting from that 2020 loss no longer lingers as much for Arkansas football fans.

Right after that 2021 win over Texas A&M, however, Arkansas got skull-dragged by Georgia in Athens.

Arkansas had a lower chance of winning this game than the Jacksonville Jaguars do of finding themselves undefeated heading into NFL Week 11 odds. It didn’t matter how aggressive Pittman was. However, as Bryant sees it, Arkansas should have gone for it when the Hogs were on the Georgia 44 yard line on fourth and 14 with 3:02 left in the 3rd quarter, even if they were down 0-27 at the time.

“A punt doesn’t do you any good here, you got to go for it there, Bryant said on a recent episode of the ‘Power Hour SEC with Carter Bryant.’ Why are you waving the white flag? You’re essentially saying ‘We’re giving up here.'”

In the next game, a loss to Auburn, came more “more cowardly punts. You had two fourth down punts in plus territory in first half. And then later in the game, when you were down by eight, you have got to score – you have a fourth in three opportunity – and you don’t go for it. You got to go for it because guess what? Auburn’s offense was lightening it up as well [Bo Nix led the Tigers to a touchdown after that punt]. So for me, that just falls short.”

The most egregious example, in Bryant’s eyes, came against the other Alabama team on November 20, 2021.

This Tuscaloosa game, which then No. 2-ranked Alabama eventually won 42-35, was closer than many expected. Alabama quarterback Bryce Young, however, was essentially unstoppable the whole game, so as Bryant sees it, Arkansas should have been more aggressive than usual on fourth down simply to minimize the number of times Young had the ball.

That goes for what would have been a very gusty situation in the middle of the fourth quarter with Arkansas down 28-34 and facing a fourth down and 7 at its own seven-yard line. Conventional wisdom screams “punt” in this scenario, which is exactly what Arkansas did.

Bryant thinks that was a mistake: “Arkansas’ defense was not stopping Alabama at all and if you know that you are not stopping them at all and everything that you’re doing defensively isn’t working, then punting the football here is guaranteeing that they’re going to score again.”

Indeed, that’s what happened when Alabama then blazed 55 yards down the field in less than two minutes and with only four plays to go up by two touchdowns. “Punting the football here [was] a cowardly thing to do because you’re essentially just giving the game away right here,” said Bryant, adding Pittman should have trusted his best players like KJ Jefferson and Treylon Burks to make a play on fourth down.

Sometimes, however, Pittman does strike the right balance. The week before Alabama, Arkansas beat LSU 16-13. When that game was tied at 13, Pittman went for it on fourth and one at the Arkansas 47-yard-line. While the Hogs got the yard, a penalty negated that run and Arkansas had to punt anyway. Still, the punt on fourth and six after the penalty was the right one because LSU had a true freshman quarterback playing in his first extended action of the year and wasn’t as big of a threat as Bryce Young would be or Bo Nix already had been.

Still, it should be noted that Pittman is still learning as a head coach, which he has only done for two seasons at this level.

And, late in the 4th quarter vs Alabama, he showed signs he’s already learning when he reneged on an initial decision to punt on a fourth and 11. “We’d played such a good game, and we’re down on the [Razorbacks’] 35-yard line, and we’re 14 down,” he said a couple days afterward. “And I go, ‘If we don’t make it, they’re going to score again, and there’s a chance they can score again and beat us by 21, and that’s not going to be the tell-tale. And in that time when I sent the punt team out there versus the time that I called timeout, I said, ‘I ain’t giving these kids a chance to win, and if I do this they’re going to hold it against me, and I’m going to hold it against myself forever. No matter what the outcome is, we’ve got to play to win,’ and that’s exactly what happened.”

In that case, it paid off as Arkansas scored a touchdown to close the gap to a single score.

In the end, Bryant considers this a “major” flaw because it projects as something that could keep Arkansas from jumping past the “good” to “very good” status into “great.” In the SEC West, that’s the difference between finishing in the middle of the pack and getting the division crown, which likely means a berth into College Football Playoffs.

In 2022, “Arkansas is slated to play in eight one-score games, according to the Vegas points spread this year, which is tied for the most in the SEC along with LSU,” Bryant said.

With a program seemingly strong as Arkansas, it’s impossible to predict what might cost a team multiple wins in a slate of such predicted tight outcomes. Regardless, a head coach’s play-calling instincts should not be one of them.

With 12 more games and a much larger sample size to draw from, we will know a lot more about whether this is truly a “major flaw” with Pittman or something that has helped him evolve and become a better coach.

NB: Carter Bryant is a “friend of the program,” as it were. Andrew Hutchinson and I have known him for years – he’s truly one of the most interesting, hilarious SEC sports commentators out there.