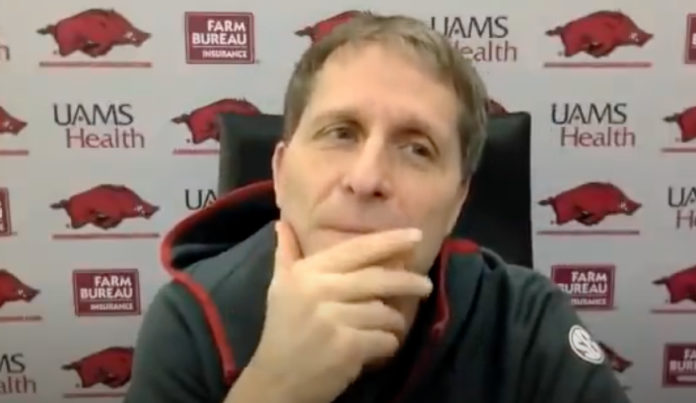 Arkansas returns to Bud Walton Arena on Wednesday night desperate for an SEC victory as they face the Missouri Tigers, just a few days after the Lady Razorbacks set the tone with a big win against Missouri over the weekend. The men’s basketball team, on the other hand, had dropped their third consecutive game to open conference play on January 8th at Texas A&M.

However, there was a glimmer of hope for Arkansas fans as their team plunges deeper into SEC play. The Razorbacks mounted a furious late-game comeback vs the Aggies, cutting the lead to 78-79 with just over a minute remaining after trailing by as many as 17 in the second half before A&M ultimately sealed the victory from behind the 3-point line. The Hogs looked better in this late-game run than they have in nearly any stretch so far this season.

On the other side of the ball, Missouri had a very disappointing start to their season before knocking off expected SEC powerhouse, No. 24 Alabama, in their last contest. The unlikely upset gave Mizzou their seventh win of the season to go with seven losses – including 1-1 in conference play after their SEC-opening loss to Kentucky.

Aside from that 6-point Alabama victory, Missouri has not looked particularly good in their young season, losing to the likes of Liberty (10-6) and Kansas City (6-6) in their non-conference schedule. However, they’ve had plenty of experience playing against good teams, losing to three of the Top 11 teams according to the KenPom rankings (Illinois, Kentucky, and Kansas). This doesn’t ensure success against good teams moving forward, but experience only leads to good things.

What to Expect when Missouri Has the Ball

Missouri is a notoriously bad 3-point shooting team, averaging a 355th-ranked 25.3% from 3-point range as a team. The difference in their win over Alabama came from the 3-point line and free throw line. The Tigers and Tide shot identical percentages from beyond the arc, but Missouri attempted 11 more free throws than Alabama and made 10 more. This played a large part in allowing them to squeak out the 92-86 victory.

The Tigers have only one player shooting above 30%, and that’s 6-8 freshman Yaya Keita who averages only 7.5 minutes per game and 0.2 3-point attempts per game. The Tigers’ leading scorer is 6-7 forward Kobe Brown. The junior swingman scores roughly 15 points per game on 52% shooting from the field. Brown is also a deep threat in terms of volume, shooting around 2.5 long-range attempts per game – though he only makes about 25.7% of those attempts. He’s an excellent rebounder, grabbing 8.8 rebounds per game and boasting a 16.9% rebound percentage. In other words, Brown grabs 16.9% of available rebounds when he’s on the court. For reference, Arkansas’s leader in this stat is Kamani Johnson at 22.8% followed by Jaylin Williams at 16.8%.

It should also be noted that Brown is coming off of his hottest game of the season in the win against Alabama. In the upset victory, Brown scored 30 points on 69% from the field, 67% from distance, and 91% from the free-throw line. He also contributed 13 rebounds and 4 assists for the Tigers. The junior has already had four games this season shooting 69% or better from the field, including the win over the Crimson Tide, though his Tigers are only 2-2 in these outings. They are 1-4 when Brown is held under 50% shooting.

Missouri’s most common starting backcourt is a trio of tall guards in junior Amari Davis (6-3), junior Dajuan Gordon (6-4), and senior Javon Pickett (6-5). Davis leads this trio in scoring at 10.4 points per game, though none of the three shoots better than 26.7% from distance. Jarron Coleman, a 6-5 junior who has only started three games this season, is the Tigers’ leading assist man at 2.9 assists per game. The Tigers’ plethora of key guards will once again test the Razorbacks’ perimeter defense. Containing the dribble-drive and forcing Missouri into difficult jumpers could prove to be a major key to success for the Hogs on Wednesday night.

What to Expect when Arkansas Has the Ball

The Hogs got their third good game in a row from senior forward, Stanley Umude, who cooled off after a scorching hot start but still contributed 10 points in 23 minutes before fouling out. The grad transfer is averaging 19.0 PPG, 3.0 RPG, and 1.3 SPG while shooting 55% from the floor and 43% from long range in SEC play. Thanks to the SEC leader in points per game, JD Notae, the Hogs don’t have a pressing issue in terms of scoring, though they do go stagnant at times.

Their biggest issue comes in protecting the basketball. The Aggies started their first-half comeback when Arkansas started turning the ball over on consecutive possessions after building an early lead. The Hogs are averaging 12.5 turnovers per game on the season and 16 per game in SEC play. This issue alone could be the difference in two or three losses the Hogs have suffered this season.

Arkansas vs Missouri: What to Watch For

Kamani Johnson is a transfer that was not commonly thought of as a key rotation piece during the preseason or even during the Hogs’ non-conference slate. However, against Texas A&M, Johnson grabbed eight rebounds, including four offensive, in 19 minutes played. He contributed seven points on 83% free-throw shooting to help spark the Razorbacks’ late-game comeback. Despite ultimately falling short, it’s clear that Johnson provided an inside presence and a certain toughness that the Hogs seemed to be lacking. Will we see an uptick in minutes from the junior forward moving forward?

This will likely be the worst 3-point shooting team the Hogs play this season, giving them a great chance to earn their first SEC win of the season. Naturally, Arkansas fans will be concerned that Missouri randomly catches fire in Bud Walton Arena, as many teams seem to do. The Razorbacks have allowed their opponent to shoot above their season 3-point average in six out of nine games in Bud Walton Arena this year, as well as in three out of six away/neutral games including the Little Rock game. Oklahoma even shot a season-high 59.1% from distance in their blowout win over the Hogs despite shooting roughly 36% on the season. In the nine total games Arkansas allowed opponents to shoot above their average, the Hogs are 6-3.

Missouri will shoot above their poor season 3-point average, but it won’t be enough to overcome the Hogs homecourt advantage. Umude and Notae lead the charge offensively as the Hogs muster together enough defensive stops to earn their first SEC win of the season. I predict the Hogs win 82-73.

ESPN, meanwhile, gives the Razorbacks an 89.9% chance of winning with a projected win differential of 15.1 points.

How to Watch Arkansas vs Missouri