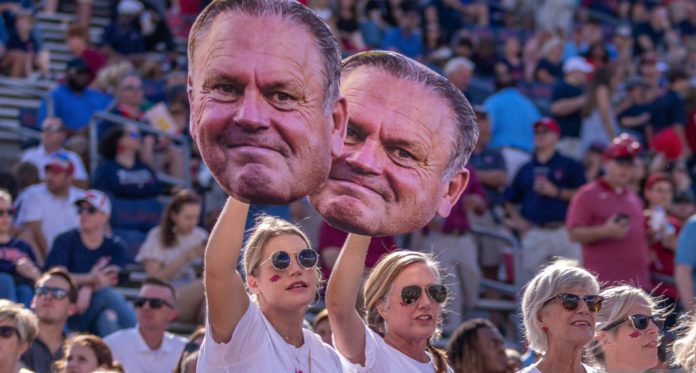 Loyalty is an illusion, a trait human beings only apply when it best suits us. It certainly exists, but only as a construct. Its application among many people is willy-nilly, without consistency or constancy. It’s a trait left abandoned when one abandons us with the same fickleness. That abandonment can create ill feelings, downright hostility and even disownment.

Apologies if this brings back memories of your divorce. That’s only a coincidence.

No, this is about the NCAA transfer portal. Or, rather, the “Transfer Portal” — for its detractors act as though it’s a literal gate, out of a Marvel movie, some sort of malevolent power, come to pervert every sacred and holy thing about amateur athletics.

Here are some proclamations this author has seen or heard over a bulk of the last week:

“Whatever happened to loyalty.”

“This is rediculous.” The misspelling is purposeful on our part. Likely not his.

The sentiment behind the remarks was understandable given the timing of their utterance. Arkansas had lost starting safety Joe Foucha and starting nickel back Greg Brooks Jr. Malik Hornsby had tweeted he would be joining them the following morning, though at the time, it was unclear whether Arkansas’ back-up quarterback was being serious or not. Turns out, yes. He, too, was manipulated by the Sirens, er, portal, beckoning them all forth with promises of gold and dreams beyond their wildest imaginations.

At least, that’s the way up-in-arms would have it told. Among the loud-on-social-media crowd, players like Foucha, Brooks and Hornsby owe it to Arkansas football coach Sam Pittman, the university, the state of Arkansas, to finish what they started. Nary a word if one of them wouldn’t have matriculated, of course. They’re talking football field only.

And this isn’t some sort of Gen Z entitlement, either. Even back in 2015, the Bureau of Labor Statistics said that the average person will have 10 jobs by the time they’re 40 years old. That’s a different gig every two-and-a-half years from the age of 20 onward. In non-COVID year exception times, student-athletes get four (or five in some cases) years of eligibility – enough time for two different jobs. Whether college football qualifies as a job is a discussion for a different day, although the institution of the NIL points more toward that answer being affirmative.

The reality, speaking only on college athletics terms, is that the portal allows, theoretically, for each player to get the deal that best fits him or her. It’s a bit like the process they go through as juniors or seniors in high school when they first sign their scholarships to their institutions of higher learning. At places like Arkansas, this can pay massive dividends.

Consider the weight (aka: money) playing for the Natural State’s flagship university could yield. Arkansas is home to Walmart, Tyson Foods, J.B. Hunt and Stephens, just to name the big dogs. All of those have some connection to the University of Arkansas. The Northwest Arkansas region includes almost 600,000 people and continues to sky-rocket in its growth, as anyone who has driven on I-49 in rush hour can attest. NIL deal opportunities abound for Razorbacks players.

Absent the NIL, the portal allows for plug-and-play. Or close to it. There was no clutching of pearls last year when Markell Utsey, Tre Williams and John Ridgeway left their former teams for the Arkansas football program. They were welcomed with open arms. Nor was there animus thrown at the other several Razorbacks players who put their names in the portal before Foucha, Brooks and Hornsby. In fact, quite the opposite. Well wishes were everywhere. Rightfully so.

Sam Pittman and the Reloading of Razorback Football

Sam Pittman is well-liked, loved, even, by most of his current players, previous players and the fan base at large. He’s shown he can win. He coaches in the SEC. He’s got buckets of talent returning. There is scant reason to believe Arkansas cannot enter the portal itself and pick up well-qualified replacements for those who have departed.

Scouting the transfer portal for Regular Joes is a bit more difficult than scouting high-school recruits. The concept is still so new and the process more hush-hush that it’s difficult to determine how ‘in’ a school is or is not toward a player, although, yes, sometimes things leak or players post publicly post their finalist schools to broadcast to the world the coaches they’re talking with. That’s how Razorback fans know the program is ‘in’ on former Memphis safety Jason Watkins-Perkins and former Tulsa defensive lineman Jaxon Player.

The unknown is scary. In life and sports. Keeping the faith difficult. Because most fans are out of the loop as to the goings-on in the portal, other than the players who have entered from their favorite teams, every loss to the exit ramp stings. But if the trust in Pittman is there on the football field, it should be there off it, too.

Arkansas’ 2022 is one of those unknowns. On Monday night, most of the college football world watched Alabama and Georgia, two of Arkansas’ rivals in the toughest conference in the sport, play for the national championship. Razorbacks faithful could look at that game a couple of ways. For one, the Bulldogs easily handled the Hogs when the two met in Athens early in the season. Later, though, Alabama had its hands full with Arkansas in a game that needed all 60 minutes to determine a winner.

The optimist’s take is that the Hogs are close. They’re certainly closer to the two title-game participants than they are to Vanderbilt, anyway. But roster depth is something the astute would have noticed with this past year’s Razorbacks. The portal can help alleviate that. Bringing in a Jadon Haselwood from Oklahoma – as Arkansas has done – for example, not only provides the team with a replacement for Treylon Burks at wide receiver, but it allows younger, inexperienced players to avoid the limelight at the top of the depth chart for longer, thereby allowing for slow growth that in turn helps depth.

Other than Haselwood, however, little fanfare has accompanied any of the newcomers. Pittman and the rest of the Arkansas football staff need to find some linebackers to play alongside Bumper Pool. And in a hurry, too. They have to replace a boatload of depth on the defensive line with the loss of Williams, Utsey and Ridgway. The same in the defensive backfield, too, although it appears in a bit better shape now given Jalen Catalon’s return and the step forward in 2021 by players like Myles Slusher, Simeon Blair and Jayden Johnson.

That doesn’t mean, however, the Hogs are lost. Or even close to it. Every team is in the same boat, navigating the same tenuous waters that the sudden storm of the NIL and the transfer portal has thrust upon college sports. And whether fans like it or not, it’s the reality. Everyone’s dealing with it.

Shouldn’t you trust Pittman and the Arkansas brass to figure that out, too?

Here’s a deep dive into the difference between Arkansas and Georgia: