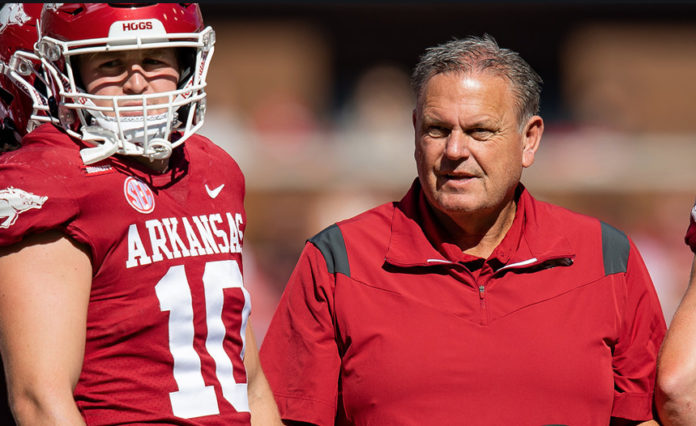 College football polls that admit to being “too early” and publish in January are always, to some extent, an exercise in eye roll-inducing overreach. While yes, the activity around the college transfer portal makes things on the surface more unpredictable than ever, we also know each team’s freshman class with more certainty than ever.

The popularity of Early National Signing Day has taken out a lot of the guesswork that used to accompany the actual National Signing Day each February 2. That knowledge of which freshmen, exactly, will step onto campus by August means that while it’s still a tad ridiculous to conjure a Top 25 this far off from the start of the 2022 season, it’s not “One Few Over the Cuckoo’s Nest”-level crazy either.

Each of the college football programs listed in the too-early Top 25 polls that published today will still lose a few more players to the portal, and they will also pick some up. Right now, things look bad for Arkansas football with a thinning secondary and the exit of Malik Hornsby, but we know they an uptick is in the offing once news of incoming Arkansas football transfers arrives.

In this new college football landscape, what matters more than the specific players who come in or leave is the overall trajectory of the program in question. In Arkansas’ case, it’s a good one. If it wasn’t, Razorback offensive coordinator Kendal Briles and defensive coordinator Barry Odom wouldn’t still be in Fayetteville. High-profile incoming transfers Landon Jackson and Jadon Haselwood wouldn’t have cast their lots with the Hogs. And you can bet Jalen Catalon and Bumper Pool wouldn’t have bothered with returning for another season, either.

In these next few critical years, Arkansas football coach Sam Pittman’s stead isn’t so much worrying about specific players coming and going, since that churn is unavoidable and happening everywhere. It’s more about making sure the processes are in place, or evolving into place, to make sure Arkansas’ current upward trajectory doesn’t taper off too much.

Sure, the growth rate will have to slow down some, considering how high the program has reached in going 9-4 a mere two years after the low point that Chad Morris wrought upon our kind. But if Arkansas can simply stay in the same range as the following predictions throughout most of the 2022 season, they will have taken the next step.

The mother ship has put Arkansas at No. 20.

“It might have taken Sam Pittman decades to finally get a chance to be a head coach, but he’s making the most of it now,” Mark Schlabach writes. “The Hogs went 9-4 in his second season, winning two more games than they had in the previous three years combined. They beat three ranked foes and nearly took down two more. There will be much work to do in the spring in rebuilding the front seven on defense.”

“Star safety Jalen Catalon will be back from shoulder surgery, although three starting defensive backs are leaving, including Foucha and Brooks Jr., who unexpectedly entered the transfer portal. Three top receivers are departing, but the addition of Haselwood should give the passing game a boost.”

Yahoo has the Razorbacks at No. 19 entering the 2022 season.

The improvement of Arkansas over the last two seasons under coach Sam Pittman has been remarkable. The Razorbacks won nine SEC games from 2015-19 but have already posted seven under Pittman. There’s optimism Arkansas is poised to take another step forward in ’22 with the return of rising star quarterback KJ Jefferson and a deep backfield featuring young playmakers like Dominique Johnson and Rocket Sanders.

Replacing Treylon Burks (66 catches for 1,104 yards) is the biggest concern for coordinator Kendal Briles this spring. Oklahoma transfer Jadon Haselwood should alleviate some of the concerns at receiver. Up front, the Hogs lost left tackle Myron Cunningham, but center Ricky Stromberg and right tackle Dalton Wagner opted to return.

Arkansas plays Cincinnati, Texas A&M and Alabama in the first half of the season, followed by road dates at Mississippi State and BYU before an off week. Three of the last five games are at home, but trips to Auburn and Missouri are on tap.

“Arkansas is one SEC program we’re high on, but maybe not quite as lofty as a few others,” writes Brad Crawford. “Despite the potential of losing as many as eight defensive starters, the Razorbacks are worthy of a top-10 preseason ranking for next season according to Joel Klatt.”

“Several key Razorbacks entered the transfer portal since beating Penn State in the Outback Bowl, but Sam Pittman’s crew does return a nucleus of talent on the other side of the football, including potential All-SEC quarterback K.J. Jefferson to headline a talented unit.”

Overall rank: 13 (ahead of Oklahoma, Oklahoma State and Michigan State)

“Too high? Sam Pittman has worked wonders in two years at Fayetteville, and the Razorbacks bring back quarterback KJ Jefferson,” Bill Bender writes.

“That’s a huge plus for an offense that averaged 30.9 points per game, and Oklahoma transfer Jadon Haselwood is a nice pickup at receiver. Arkansas has had several players enter the transfer portal, and they play Cincinnati, Texas A&M and Alabama by Oct. 1. That’s a huge first month of the season for a team looking to make the jump in the toughest division in the FBS.

Overall rank: 10 (ahead of Oregon, Oklahoma and Wisconsin)

“Arkansas had no shortage of impressive victories last season,” Scott Bell wrote. “It took down the likes of Texas, Texas A&M, Mississippi State, LSU and Penn State despite the fact that the program hadn’t won more than four games in a season since 2016. If Sam Pittman and Co. are ready to take the next step, a top-10 finish isn’t an unreasonable expectation in 2022.” [Arkansas was in the top 10 in 2021 after the Texas A&M win.]

Ok, that takes care of what I would consider major media outlets at this point. In the coming days, you’ll see more big boys like CBS release their first preseason Top 25 polls too. Across the board, we see these analysts agree the Razorbacks are a team that deserves a ranking in the 10-20 range, and should be good enough to finish No. 3 in the SEC West again.

“We’re number 3!” isn’t the kind of rallying cry that normally propels you onto the cover of a Wheaties box, but given that the SEC West is the hardest division of all time, every time, it would be a pretty big achievement to pull this off two years in a row after winning a total of three SEC games in the previous three seasons.

Arkansas Football Transfers and other Keys

In order for the Hogs to play most of 2022 ranked in the Top 20, they will need to land a few more big-time transfers. One such transfer would be defensive lineman Jaxon Player, who played at Tulsa under current Razorback defensive line coach Jermial Ashley.

Pig Trail Nation’s Otis Kirk has some great insight below. The video starts with his take on the transfer situation overall and at 4:05 he begins to discuss Jaxon Player.