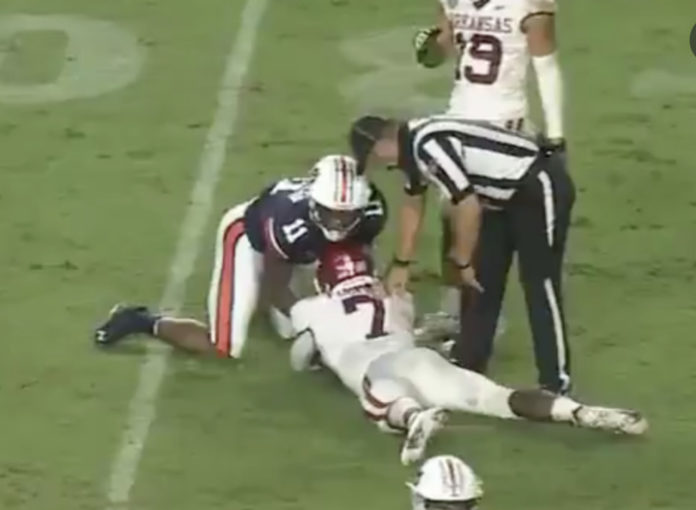 So far, in the Sam Pittman era, the two contests that Arkansas most should have won (but lost) are the 2022 Texas A&M game and 2020 Auburn game. As aggravating as that Aggies loss was, at least Arkansas has nobody to blame but itself. KJ Jefferson made a bad decision, nobody wrapped up on the fumble return, Cam Little missed a field goal and that was all she wrote.

The 2020 Auburn game, however, is a whole other story – one that will be rehashed again and again in the days leading up to Arkansas’ return visit to Auburn next Saturday.

Still fresh in every Arkansas football fan’s memory is former Auburn quarterback Bo Nix’s attempt to “clock it” late in that 2020 game at Auburn. As Auburn drove the field trailing by one and in an attempt to stop the clock, Nix backpedaled from under center, dropped the ball, picked it up then turned and fired a pass into the ground behind him to stop the clock. Former Razorback Joe Foucha ended up recovering the ball.

This was clearly a case of a backwards pass, which qualifies as a fumble that Arkansas recovered. Instead, the SEC referees ruled it as intentional grounding so the Tigers kept possession and eventually eked out a “win.” Later, SEC Commissioner Greg Sankey admitted the refs botched the call.

Many Alabama football fans are still fuming about their team’s first loss to Tennessee in 16 years, a 49-52 defeat in Knoxville last Saturday. The officials made bad calls that hurt both sides, but naturally the side that loses is going to wail the hardest.

Among a host of situations that could have gone either way, the Crimson Tide faithful are especially red-faced over the a) a targeting call that could have easily been called on Tennessee’s Omari Thomas, b) an 82-yard interception return that was called back because of a pass interference call against Alabama and c) an apparent missed pass interference/face mask against Tennessee.

In response to the outrage, an Alabama football fan named Mark Wood decided to work some spreadsheet magic and point out that the same crew officiating that game also officiated Arkansas vs Auburn. Although Wood also Tweets he doesn’t “blame the loss on the refs” he is absolutely insinuating something is awry by pointing out the same crew has a history of iffy calls.

To which our own Andrew Hutchinson responded:

As you can imagine, Woods’ Tweet – which got 314 retweets and more than 1820 likes – sparked a firestorm online.

“So, did they work any other games not so ‘controversial’ or did you just cherry pick to make a point?,” asks William Kennedy.

“It was the refs’ fault the Alabama kicker missed the field goal and the refs made Alabama miss tackles too,” Josh Bordelon cheekily adds. “It’s over – move along – I’m sure in Alabama’s 15 year dynasty had more than one call [that] went in their favor and changed the outcome and kept the dynasty intact.”

And of course this:

What To Do About SEC Referees

If this controversy shows anything, it’s that no SEC fan base is immune from shoddy officiating. Even the supposedly privileged ones. Razorback sportscaster Mike Irwin doesn’t think the SEC office had it out for Arkansas in 2020 vs Auburn. He just feels they “screwed up,” as he said on a recent “Ask Mike.”

“That game [Tennessee vs Alabama] to me was decided by referees and I don’t like that as a college football fan and especially if you’re the SEC, why do you continue to put up with this? Why do you allow bad officiating to decide games?”

“There is no excuse for the low level of officiating that I see, not just in Arkansas games, but in other games too.”

Irwin added that he’d like for the SEC to emulate other conferences like the Big Ten and become more rigorous in its reviews of referee performances. It should not only suspend those who don’t improve, but ban them outright from referring future SEC games.

While Alabama fans are right to have a legit beef with the calls mentioned above, others appear to simply be clowning.

Here’s a theory floated by an Alabama outlet that grossly mis-translates the last part of a referee’s touchdown signal as double fist pump action from a covert Tennessee fanboy:

With such ridiculous conspiracy theories being floated, and the general bad behavior toward refs in general, it’s no wonder there’s a nationwide shortage of officials that is most obvious at the youth sports level. Since high school sports are a feeder system to college, this could lead to a shortage of qualified college referees as well.

“Who the hell wants to be a referee when this is what you get?,” asks Pat Forde on the College Football Enquirer podcast. “You signal the touchdown correctly. You bring your hands down, you do a fist, and then all of a sudden how you are viral across the worldwide web as a potential fan in disguise. Come on.”

There is a bit of reverse chicken-or-egging going on here. The more crazy college football fans do this kind of thing, the less desirable the official’s job becomes and smaller the pool of qualified college football official will become. That means if the SEC ever does get with the program and hold officials’ feet to the fire with more frequent suspensions, it may not be able to find better referees to step in and show folks how it’s done.

Not that unhinged fans care care about this. They will just keep crowing till the zebras stay home.

The fan conspiracy that perhaps takes the cake from Alabama vs Tennessee is the one that proposes that the goal post on which Alabama missed a late-game field was too narrow and, had it been regulation width, the Crimson Tide would have gotten three more points. Later, Tennessee football fans tore both goal posts down and ultimately threw them into the Tennessee River to dispose of the “evidence.”

Then native Arkansan Dan Wetzel chimes in: The refs “bat signaled the SAE fraternity and said, ‘Get down there. Get it. Get in the river. Let’s go. Got to hide it.’ Throwing the murder weapon in the river is an old trick.”