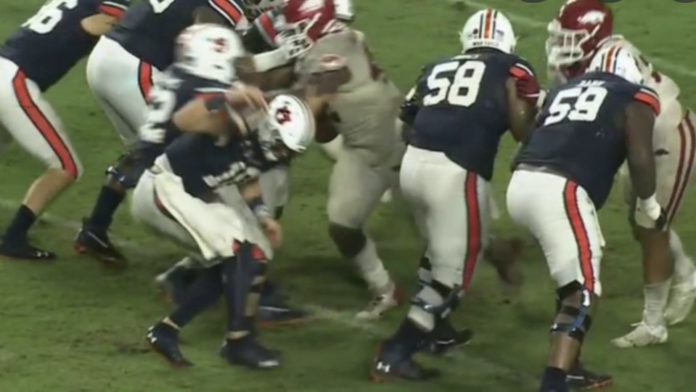 If you like offensive football, you likely found this past weekend’s tilt with Ole Miss to be highly entertaining. If you are a fan of knocking-dudes-into-the-dirt defensive football, well, you probably threw up a little bit at what went on in Oxford.

While both defensive units played extremely soft and sometimes appeared lost, the offenses rolled up and down the field all afternoon. Ole Miss hit the big plays with well designed schemes and/or blown assignments by Arkansas. The Razorbacks mixed in methodical drives with an interjection of big runs and downfield passing to steamroll their way to the end zone. At least, until that failed two point conversion (which was unequivocally the correct call).

Next Up: Auburn Football

Now Sam Pittman’s Razorbacks (4-2, 1-2) finally come back home to Fayetteville to take on the Auburn Tigers (4-2, 1-1) in what has all the feels of a must-win game. Not a must win for the SEC West crown or slotting for a top tier bowl game but rather for these players. Many of them have done A LOT of losing during their time on the hill including some epic conference losing streaks.

But this is a different Razorback squad and staff than in those Bret Bielema and Chad Morris years. This group has the legit capability to get the train back on the track starting with this home tilt versus Auburn. Vegas oddsmakers agree as the Hogs are considered a 5-point favorite which marks the first time in the Pittman era the Razorbacks are favored over a SEC team.

You’d likely have to reach back into the Bret Bielema era for the last time that happened.

Auburn is coming off a thumping at home by the Georgia Bulldogs. Similar story to the Hogs’ loss in Athens a couple of weeks ago. Georgia dominated the line of scrimmage on both sides but did much more damage through the air than they did against the Hogs. Auburn scored a touchdown against the vaunted Dawgs’ defense — only the second one they’ve given up all season.

Georgia wasn’t really challenged in the game despite falling behind 3-0 after Auburn’s initial drive. Once the Bulldogs get up on the scoreboard, the physical run game and that incredibly good defense sucks the life right out of the opposition. Arkansas felt that cold, lethal grip and so did Auburn. Rest assured, they won’t be the last.

The most interesting thing from that blowout of Auburn was veteran Tigers quarterback Bo Nix proclaiming the game would have turned out differently if the officials would have flagged Georgia for a pass interference call on a 4th and goal just before the end of the first half.

Nix felt so strongly about the perceived blown call that he used the post game presser to say, “I thought it should’ve definitely been a pass interference. It’s just stuff like that that we don’t ever get that changes the game.” Auburn? Never getting a game changing call?

To steal a line from tennis icon John McEnroe…”You cannot be serious!”

Razorback fans will be the first in line to debunk Nix’s ludicrous statement.

Fresh in every Hog fan’s memory is Nix’s attempt to “clock it” in last year’s game at Auburn. As Auburn drove the field trailing by one and in an attempt to stop the clock, Nix backpedaled from under center, dropped the ball, picked it up then turned and fired a pass into the ground behind him to stop the clock.

Given Chad Morris was Auburn’s offensive coordinator that day, maybe that is how he teaches the spike to stop the clock. Which would rival the genius idea to get undersized offensive lineman to play in the SEC so they can be quicker than D linemen, not tackling on a fake fair catch against North Texas and many other mind-numbing things that happened during his regime. (Sorry, couldn’t pass up the Morris dig.)

I’m pretty sure everyone who ever played peewee football learned a backward pass is considered a fumble. Well, unless you were part of the SEC officiating crew and the replay booth personnel that day. The officials ruled it was not a fumble but rather intentional grounding. For fans of early 80s TV, insert a “What you talking about Willis?” right here.

As we all know, Auburn went on to kick a game-winning field goal with 7 seconds left and the Hogs got nothing more than an undeserved loss and a too little, too late apology from the SEC office that the call was wrong. This past summer, SEC Commissioner Greg Sankey admitted the league messed up too.

But the missed fumble against the Hogs isn’t the only event that has occurred to debunk Bo Nix’s charge.

Bo Nix: You’re Really, Really Wrong on This One

Ole Miss in 2020 and Georgia State in 2021 would also serve as excellent witnesses to Nix’s fallacious claim.

Against Ole Miss, Auburn was the beneficiary of a no call on a kickoff that clearly touched the Tiger return man and was recovered in the end zone by a Rebel defender. Auburn won 35-28. Sure seems like this “no call” went Auburn’s way. Lane Kiffin, much like Sam Pittman, was frustrated with the results of the botched call but the SEC office didn’t feel the touchback/fumble was worthy of an official statement leaving Kiffin incensed with the lack of transparency from the SEC office regarding officials.

Earlier this season, the Georgia State Panthers were jobbed by a SEC officiating crew when a TJ Finley pass was incorrectly ruled a catch shortening the Tigers distance to score the game winning touchdown with about a minute to play.

Would Auburn have scored anway? Who knows but the obvious missed call by the officials AND the replay booth sure made things easier. Once again, the losing coach had significant issues with the SEC office over a crucial, blatantly incorrect call going the way of Auburn.

Now, let’s be clear…EVERY team is the beneficiary of missed calls and mistakes by officials.

Some are subtle while some are like the three mentioned above that happened in crunch time. There seemed to be a bazillion missed holding calls in the Arkansas-Ole Miss game this past weekend. Hudson Clark was clearly held on the Snoop Conner 34 yard touchdown run to put the Rebs up 38-31. That’s clear as day in this clip:

And Matt Corral was facemasked on one of his TD runs.

The difference is none of those teams’ quarterbacks went bellyaching in the post game press conference about the blown calls. Surely, Auburn coach Bryan Harsin had a little conversation with Nix about what can and can’t be said in a setting like that. Nix has been around long enough to know better.

The coach is the one that gets the green light to complain and plead his case to the media if he feels he was truly wronged, not the quarterback.

For the first time in three weeks, the Razorbacks will face an unranked team although Auburn was No. 18 before losing to then No. 2 Georgia. The upside for the Hogs is they are at home after an elongated three-week road trip.

There is no better time to get back in the win column and get this surprise season going forward again. If asked back in August if 4-2 at the midway point would be acceptable, any Razorback fan in their right mind would have taken that in a heartbeat.

I know losing a game like Ole Miss where a win was a two-point conversion away stings but let’s get real: this Razorback team is performing well above realistic pre-season expectations.

Defensive adjustments will be a big key for Saturday’s 11 a.m. kickoff against the Tigers. The 3-2-6 scheme that Arkansas defensive coordinator Barry Odom has used effectively in certain matchups has been exposed the last two weekends. Georgia used a power run game to overwhelm the Hogs up front and Ole Miss used quarterback runs and misdirection running plays while taking advantage of assignment issues in the defensive backfield.

Odom and Pittman know a lot more football than me (and pretty much everyone reading this article) and I expect them to adapt and adjust. Let’s just hope safety Jalen Catalon, defensive end Tre Williams and others are healthy enough to execute the adjustments.

Auburn runs the ball decently so I would liken them more to Ole Miss in how they approach moving the ball on Arkansas minus the deep shots Corral was able to take. Bo Nix freelances a ton so containing him will be a big factor in shutting down the Auburn offense. Getting him on the ground for negative yards will go a long way to determining the winner.

Frustrating and confusing him into some turnovers is even better.

On offense, it’s all about continuing the progression of KJ Jefferson and giving him time to operate. He’s made huge strides since the first half against Rice with a lot of weapons at his disposal. One could argue Arkansas has more depth of talent at the wide receiver and running back spots than anyone in the SEC.

Trey Knox’s emergence as a pass catching threat at tight end only helps. The more Jefferson spread the ball around to all his guys against Ole Miss, the more open Treylon Burks got because the defense had to respect the other skill players. More of that please.

The home crowd with cool, fall football weather and homecoming festivities lines up for an epic Saturday in Fayetteville. This is a huge weekend for Razorback football. The coaches know it. The players know it. The fans know it.

If the defense can make adjustments and the offense can finish drives against what will be a stingier Auburn defense, one has to like the Razorbacks’ chances.

As long as the Razorbacks aren’t impacted by a game-changing call going Auburn’s way. Again.