Search
Home Arkansas Football Perspective Where the Razorbacks’ Long, Hard Road out of Hell Leads Next 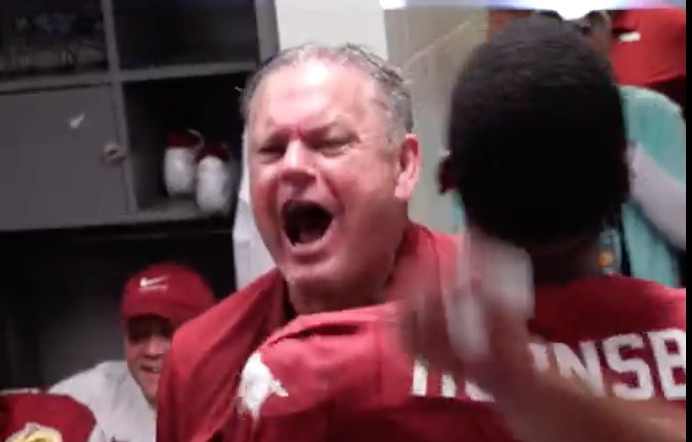 Confusion occasionally arises when the discussion about whether college football bowls ‘matter’ comes up. In the grand scheme of things, no. They don’t. The difference between 8-5 and 9-4 is negligible. It always has been, too. The proliferation of other TV viewing options in the last 10 years has also made the bowls even less relevant to the average college football fan. With so many other things to choose from, rare is the Joe Schmo who will choose to watch as many bowl games as they can. The notion that players should play in the game instead of opting-out to prepare for their professional future is dated to the point of being archaic.

Bowls help programs develop. Especially programs like Arkansas. The result of the Razorbacks’ Outback Bowl against Penn State – a 24-10 win – is irrelevant. But the weeks of December that led up to it, and the game itself, are far from it.

The Razorbacks are still a program searching for their identity. Not in the sense that Arkansas football coach Sam Pittman and Co. are lost, mind you. Far from that. But one year does not a successful program make. Dynasties are built on consistency. Consistency is built on returning players improving and finding replacements year after year who can carry the torch for those who have left. And that is what December brings.

Consider Arkansas’ best players in the Outback Bowl. Only a few of the most important were seniors.

KJ Jefferson, as if there were any remaining doubt, proved his place in Arkansas football history after just one season. He threw 21 touchdowns and just four interceptions in leading Arkansas to that 9-4 record, its best since 2011. He ran for more than 650 yards (the most by a Hogs quarterback since Matt Jones in 2003) and six scores, including 110 and a touchdown against the Nittany Lions, with almost the entirety of those yards coming in the third quarter alone after blocking scheme adjustments at halftime. He carried the Razorbacks on his formidable back – just ask anyone who tried to tackle him this season – all year long.

“I said ‘KJ, you can go left or right,’” Pittman said. “‘No no no. Got to make a statement.’ That’s a little bit of physicality of who he is and hopefully what our team is about.”

Behind Jefferson, who was named Outback Bowl Most Valuable Player, sophomore Dominique Johnson and freshman Raheim “Rocket” Sanders ran for a combined 164 yards and two touchdowns on 24 carries. In all, the Razorbacks had four players each run for more than 500 yards in the 2021 season. Jefferson, Johnson and Sanders will all be back in 2022. Senior Trelon Smith, who started three-quarters of the season, made an announcement on Instagram in the hours following the Outback Bowl to indicate he’s moving on:

Up front, Arkansas will return four of its five starters on the offensive line. Center Ricky Stromberg is the best of the bunch and will likely be a front-runner for the Rimington Trophy. He, tackles Dalton Wagner and Myron Cunningham (who projects as a mid-late round pick in the 2022 NFL Draft) and guards Beaux Limmer and Brady Latham, along with Ty Clary, who played all three spots on the line this season, paved the way for 361 yards rushing against Penn State. That’s ties the Arkansas football record for most yards in a bowl game. The Hogs also rushed for 361 vs Tennessee in the 1990 Cotton Bowl.

The other side of the ball is a bit of a mixed bag. The secondary should be in good shape with the return of Jalen Catalon, an All-American back at safety. Safety Joe Foucha may could also return, while cornerback Montaric Brown, a first team All-SEC selection, announced he was entering the 2022 NFL Draft.

“These past four years have been challenging and the best times of my life,” Brown wrote on Twitter. “I’m thankful for the relationships I have built and the opportunities given to me to receive my degree from the best university in the world.”

“I’m thankful for my family, academics staff and coaches for the support they have given me and for God to put me in this position. I want to thank you all from the bottom of my heart for giving a kid from Ashdown, Arkansas an opportunity to showcase his talent and live out his dream. I will forever be a Hog! I will be declaring for the 2022 NFL Draft.”

Up front, Zach Williams and Eric Gregory provide building blocks for a competent defensive line, though the return of defensive tackle John Ridgeway, who was arguably the team’s best linemen this season, would help a ton.

Most important is linebacker, about the only position on the roster that looks shaky heading into the next phase of Arkansas’ power rise. Grant Morgan and Hayden Henry will exit. Morgan’s six seasons with Razorbacks ended with a Burlsworth Trophy as the best player in college football who started as a walk-on. Henry’s five tackles against the Nittany Lions provided the Hogs with three players all registering 100 or more this season, along with Morgan and linebacker Bumper Pool.

Pool may be the key. Even Pittman mentioned in the post-game press conference after the Outback Bowl that he wasn’t about to stop talking to Pool about a possible return. In fact, as he had mentioned before, it’s arguably the biggest recruiting job he’ll have this winter. Pittman looked over at Jefferson in the conference room afterward, hinting he needs his leader to help him in that regard.

Pool and Foucha met with the media after the Outback Bowl and both indicated they will wait a few days before making any decisions on their futures.

“With Grant, Hayden and Bumper – and I’m not giving up on Bumper now – I want him back,” Pittman said. “It’s amazing how those guys rotate and they love each other. Never happens like that. How they go in there and they play together like that, it’s amazing. Really great to see and shows a lot about their character.”

Outside of Arkansas and Pennsylvania, relatively few eyes were on the Outback Bowl. The Fiesta Bowl with No. 9 Oklahoma State and No. 5 Notre Dame kicked off shortly after Arkansas and Penn State began. Even the Citrus Bowl, between Kentucky and Iowa, featured two ranked teams. To much of the country, Arkansas doesn’t register as a power. Not yet.

But for Pittman and the people of Razorbacks Country, the Outback Bowl wasn’t just an Outback Bowl. It was the culmination of a long, hard road out of hell.

“Our state is hungry for football,” Pittman said. “We’re a proud state. No disrespect to any other sport, football is big in the state of Arkansas at the University of Arkansas. There’s always folks that want more and one of them is me. But it’s over now. To be Outback Bowl champions with nine wins, I’m really really proud of our teams and what we’ve accomplished.”

Now, for the future.

“To the [super] seniors. I hope you coming back was worth every practice, every workout this offseason, everything. Because we had three rivalry games and we all them trophies. We just won the Outback Bowl. 9-4? We’re going to end up in the Top 20 in the country, right where Arkansas belongs.”

Brown and Smith were two of nine true Arkansas football seniors who have option to return for an extra season because of the pandemic-related eligibility relief granted by the NCAA last year. So far, only right tackle Dalton Wagner has announced he’ll return.