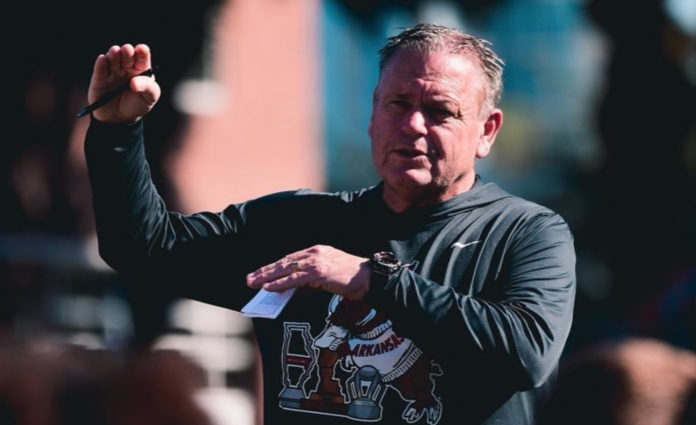 Twenty years ago, I stood in the Cotton Bowl, frozen to my core, watching in hungover horror as the Hogs could muster nothing against Oklahoma.

That was the first and worst bowl I attended. It’ll pain me to be elsewhere this Saturday when Arkansas has a similar 11:00 a.m. kickoff, but a far different backdrop and outlook.

Tampa’s prettier and this matchup against Penn State is more favorable. No offense to Dallas, or the Nittany Lions, mind you.

But it’s exciting for Arkansas to be in a bowl that matters again, and this Outback Bowl feels like a launching point rather than an apex. For Sam Pittman’s second season to end in the best fashion anyone could have projected, however, these Hogs must overcome neophyte status from the jump.

Penn State has encountered sustained, if tempered, success under James Franklin. Many of its players will be playing in a second or third bowl game.

And yet with a raft of injuries, draft defections, and the looming threat of Covid-19 attrition at hand, Arkansas can’t let an experience deficiency be an excuse. Therefore, this is a challenge and an opportunity. A Razorback loss wouldn’t sully the season greatly at all, but a win? The clear, present, and instant implications go well beyond a mere 9-4, Top 20 campaign.

K.J. Jefferson’s maturation in three mere months ranks as one of the most incredible facets of this season. Especially after the early, ugly pick against Rice that caused some fan grumbling about ball security.

The Sardis, MS product promptly threw exactly two more interceptions the rest of 2021, one in SEC play on a failed Hail Mary at Ole Miss. For all the contact he absorbed, and the 400-plus plays in which he was directly involved, he lost but two fumbles.

His Outback Bowl performance could enhance his standing, and 2023 NFL Draft status to boot.

The first encouraging sign is that the Nittany Lion defense, while stout, isn’t overly aggressive. Penn State’s a Top 5 scoring defense but ranks 114th in sacks per game.

Even without ’22 draft-bound Treylon Burks, Jefferson’s quick delivery and Kendal Briles’ reliance on tight short routes and screens should yield results. This may be the game, too, that allows Briles to utilize tight ends more freely.

And even if that position’s aggregate production underwhelmed this year, Blake Kern, Hudson Henry, and Trey Knox still amassed 36 total catches. It’s modest output, but enough to still make the underneath option viable.

Jefferson leaned on Burks, no question. But De’Vion Warren’s best game of a frustrating final year came in the finale against Missouri, and Warren Thompson shined at times.

The weapons might not strike casual outsiders as potent. But Burks’ absence actually grants Jefferson an invaluable chance to excel. If he shows out like he did in these satisfying highlights, then for the first time since Darren McFadden roamed the Earth, Arkansas will enter a college football season with a legitimate preseason contender for the Heisman.

Arkansas Football Coordinators Get Auditions, Too

There’s an increasing sense that Briles and defensive coordinator Barry Odom will be around again for 2022. Both remain justifiable targets for top jobs elsewhere, though.

Arkansas would love the stability inherent in their returns. Add in Scott Fountain’s impressive bolstering of the special teams, and the return of all three coordinators certainly enhances the Hog profile for ’22.

If any of these guys is summoned for interviews next week, though, it means things went well in Tampa.

Odom, in particular, strikes many as ready for a return to head coaching. After all, he didn’t flounder at all in Columbia, and when Missouri fired Odom, Pittman wasted no time persuading him.

The payoff is ongoing. Arkansas reined in giving up the big plays and tackled better, which offset pedestrian turnover generation (the Hogs forced 14 all year).

Of course, Odom faces the same predicament as Briles from a personnel standpoint. Tre Williams’ DWI and ensuing draft announcement takes away the Hogs’ sack leader.

But he’s plugged pieces into place expertly so far. Jalen Catalon’s absence allowed Myles Slusher to thrive and Malik Chavis to emerge, too. John Ridgeway, Zach Williams, Eric Gregory, and Taurean Carter played well enough this fall to cover for Tre’s absence. The back end is healthy and stout, too.

Provided Arkansas clamps down on the Lions’ somewhat vanilla attack, Odom’s name could start circulating anew. Even with most of the plum jobs having already opened and closed, he’s a potential hot name if something avails itself.

And again, the matchup stands to be exploited. Penn State’s running game lagged badly behind a tattered O-line, and quarterback Sean Clifford, though competent and seasoned, also isn’t electric.

The furor over Pittman’s change of agents died a bit, but it’ll resurface after this game regardless of outcome. A win, however, creates newfound (but welcome) issues for Hunter Yurachek.

Pittman’s demands for a new deal will escalate on a ninth win. If Jefferson excites, and the coordinators stay, then Pittman’s earned that right further.

Beyond the sheer awe that a 9-4 season compels, an Outback Bowl victory cements recruiting stability for the long term. Pittman’s clearly earned the right to make those demands in that scenario, too.

This hardly qualifies as anything about which Hog fans should ever gripe. We’ve had meaningless, melodramatic Januarys before, but if Arkansas authors a win Saturday morning, then all apprehension about Pittman’s desire to be paid handsomely should soften.

And in an unusual move, I’m gonna predict that very happy problem is forthcoming. Hogs win this one, 34-20.

See our latest on the Outback Bowl here: