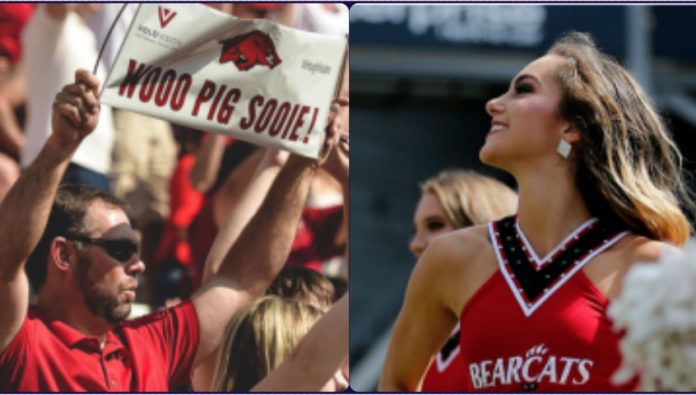 One of the benefits of playing in the Southeastern Conference—and particularly the SEC West—is knowing the schedule will always be packed with stiff competition. Although the Arkansas football program can count on its division rivals to provide tough tests year in and year out, it’s worth celebrating rare and special nonconference matchups when they come along.

Razorback fans got a taste for how exciting it can be to earn a big nonconference victory earlier this year when the Hogs smacked then-No. 15 Texas, 40-21, on Sept. 11. Although the fan base has another nonconference heavyweight opponent to look forward to in Penn State, Arkansas’ Outback Bowl foe, it’s worth taking a look at the 2022 schedule and future opponents ahead of bowl season.

And boy, is next year going to begin with a bang.

Arkansas will welcome Cincinnati to town to open the 2022 season, pitting the Razorbacks against a historic Bearcats team that became the first Group of 5 program to reach the College Football Playoff in its eight-year history after posting a 13-0 record en route to an American Athletic Conference title.

No. 4 Cincinnati will meet No. 1 Alabama in the Cotton Bowl at 3:30 p.m. on New Year’s Eve. The winner of that semifinal will advance to face either No. 2 Michigan or No. 3 Georgia in the national championship Jan. 10.

Historically, Arkansas has always played the underdog on the big national stage so on a visceral level it feel like Arkansas football fans should pull for Cincinnati. But delve deeper into the issue, and it gets a little complicated.

Cincinnati is the underdog to win the national championship for good reason—it will have to upset top-ranked Bama in the semifinals to even have the opportunity to play another higher-ranked team in the championship. Still, the Hogs would have plenty to gain if the Bearcats manage to end their magical season with back-to-back upsets.

Even though Arkansas has had the benefit of playing divisional rivals such as Bama, Auburn and LSU in the season following their recent national titles, there is something to be said about opening the season against a defending national champion. It’s even more rare to have a nonconference game lined up against the defending national champion because nonconference matchups are typically scheduled years in advance and it’s often difficult to guess just how strong a program might be once the series eventually comes to fruition.

The last time something like this happened was in 2005 when Arkansas got blasted by No. 1 powerhouse USC 70-17. That, though, was on the road and against an actual Power 5 team.

Regardless of what happens in the College Football Playoff, Arkansas will be lauded for scheduling one of the best Group of 5 programs in the country in 2022. I think most college football fans can agree that Cincinnati football is closer to resembling a Power 5 program in disguise than some sort of lowly mid-major program, which is sometimes the perception the Bearcats garner nationally. Like Arkansas, Cincinnati will also receive credit from pundits, fans and next year’s selection committee for scheduling a nonconference series against the Razorbacks.

If by chance the Bearcats do enter Fayetteville as the defending national champions, the game will cast a spotlight on Arkansas unlike anything the program has seen in recent years. Think about it… the unbeaten underdogs somehow slay not only one, but two, Goliaths to win a national title and then begin their quest to defend it on the road in a hostile SEC environment on Labor Day Weekend.

The TV networks would have a field day promoting that season opener. And the best part about it? Arkansas would reap the benefits of the spotlight. A victory over Cincinnati next year would allow the Razorbacks to start off 2022 on a positive note while also giving the program a major boost in terms of national perception.

I can only imagine how many recruits will pack the sidelines in attendance at that game – imagine how impressed they would be to witness an Arkansas victory over the defending national champions in front of a raucous Razorback Stadium crowd?

A potential Cincinnati championship run would come at a price, however. It would mean the Bearcats would upset the Crimson Tide—the SEC’s Golden Goose. A Cincinnati title run could also mean a victory over Georgia if the Bulldogs are able to beat Michigan. That would be the worst-case scenario for the SEC—seeing its two best teams fall on the national stage to Cincinnati, which, despite all of its accomplishments, still plays its home games in front of 37,000 people at Nippert Stadium.

OK, so it’s not the size of the stadium that matters, but still, a Crimson Tide loss to the Bearcats would be a catastrophe for the SEC.

As much as Arkansas fans would enjoy hosting the defending national champions to start the 2022 season, they must first consider whether it would be worth enduring the damage the conference would face following a Cincinnati win over Alabama for a shot at the champions in Week 1.

Either way, Arkansas is sitting pretty knowing it’ll open next season under the spotlight against a highly respected program. The only remaining question is exactly how much cachet Cincinnati will bring to Fayetteville after its first playoff appearance.

Here’s the latest on Arkansas football from the Outback Bowl: