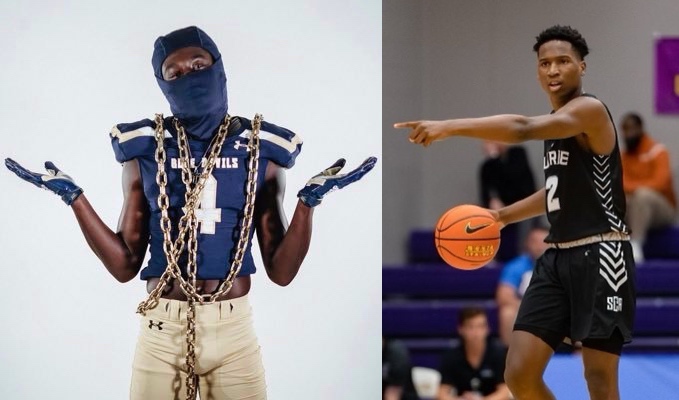 The numbers vary depending on where you look, but there’s no denying the fact that Arkansas football commit Davion Dozier turned in a dominant performance in the first game of his senior season.

Playing a school one classification larger, the 2023 three-star recruit from Alabama had well over 200 receiving yards — all in the first half — to lead Moody to a 55-21 win over Pell City last Friday.

According to statistics he shared on his own Twitter account, he caught seven passes for 258 yards and two touchdowns, but Loyd McIntosh for the Trussville Tribune reported he had eight catches for 235 yards and three scores.

“When you give the ball to No. 4, good things happen,” Moody head coach Jake Ganus told the Trussville Tribune afterward. “If you knew how hard he’s worked since I got here in January and how much he’s grown as a young man… It goes way past the football field. He’s destined for greatness.”

Regardless of the exact numbers, it was an impressive outing for a player most outlets don’t even consider one of the top recruits in Arkansas’ 2023 class, as he’s considered a high three-star with a .8714 grade in the 247Sports Composite.

Listed at 6-foot-4, 200 pounds, Dozier displayed a versatile skillset in his season debut.

He caught a couple of intermediate throws that he turned into explosive plays with 50-plus yards after the catch, including a 67-yard touchdown and an 81-yard gain on which he was finally brought down at the 1. He not only outran defenders on those plays, but also managed to avoid multiple tackles.

There was another catch on a 50/50 jump ball that required him to wrestle it away from the defender and he adjusted well to make a nice over-the-shoulder grab in the end zone on another one. His highlights from the game, which are below, also show him blocking down field on long runs by a teammate.

“Everyone says I’m small and I’m skinny, but I’m physical,” Dozier told the Trussville Tribune. “I put a lot of work in the weight room and a lot of work on and off the field, so that’s what helped me to do that tonight.”

Dozier is one of two wide receivers among Arkansas’ 23 commitments in the 2023 class, with the other being four-star athlete Micah Tease. Only one of the Razorbacks’ current receivers, transfer Matt Landers, is definitely leaving after this season, but even if the likes of Warren Thompson and Jadon Haselwood also head to the NFL, it’s hard to project how Dozier and Tease may factor into the offense next year.

Barring transfer, the Razorbacks are set to return the other five receivers in Best of Arkansas Sports’ top eight and that doesn’t even include one of the three four-star freshmen. Cracking the rotation as a true freshman would be tough, but performances like last Friday’s would certainly help Dozier’s case.

Check out the highlights from Dozier’s 200-yard game:

Arkansas football fans hoping to catch a glimpse of the Razorbacks’ other wide receiver commit, Micah Tease, won’t have to travel far to do so.

Bentonville West will host Tease’s Booker T. Washington squad from Tulsa at 7 p.m. Friday for a non-conference matchup in Northwest Arkansas as part of the first week of high school football in the Natural State.

It will be the season opener for both teams, but Booker T. Washington High did participate in a half-game scrimmage last week. Facing a couple of his future teammates — the Hasz twins, Luke and Dylan — and four-time defending state champion Bixby, Tease caught a swing pass and raced 75 yards down the sideline for a touchdown.

The Razorbacks are hopeful Tease will make plays like that in Fayetteville in the coming years, as they’ve recruited him as a receiver. Ranked No. 174 overall with a .9286 grade in the 247Sports Composite, he’s listed as an athlete and was pursued by some schools as a defensive back.

He won’t be the only player worth watching in the game. The hometown Wolverines have a trio of prospects in offensive lineman Lane Jeffcoat, cornerback Nick Bell and linebacker Braden Jones.

Jeffcoat has offers from North Texas, Arkansas State and UCA. Bell, the son of former Arkansas defensive lineman Geno Bell, has offers from Navy and Princeton. Jones turned some heads with a 4.36-second 40-yard dash at an Arkansas camp last summer and recently committed to UCA.

Those unable to attend the game can watch it via a live stream here. 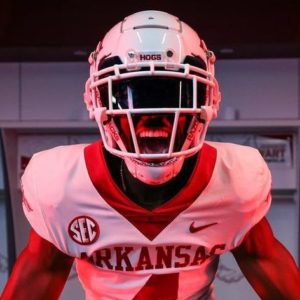 Arguably the state’s biggest rivalry, this year’s Salt Bowl between Bryant and Benton will also feature a couple of the best prospects Arkansas has to offer in the junior class.

Having won the last four titles in the state’s largest classification, Bryant is once again a frontrunner in 2022 and lineman TJ Lindsey could play a role in making it five straight for the Hornets.

Listed as a defensive end/tight end in his Twitter bio, Lindsey is a 6-foot-5, 270-pound prospect in the Class of 2024. He’s already been offered by Arkansas, Georgia, Notre Dame, TCU and several others.

It’s still very early in the process, but Lindsey already has an 88 grade from 247Sports, making him a high three-star prospect, and is ranked the 26th-best edge in his class.

One of the few Arkansas prospects currently ranked ahead of him is Benton running back Braylen Russell, who is the Razorbacks’ lone 2024 commitment at the moment. He began his career at Hot Springs Lakeside before transferring to Benton this offseason.

Since committing to Arkansas, Russell has picked up offers from Ole Miss and Tennessee. He’s a four-star prospect on multiple outlets and ranked as high as No. 199 overall by Rivals.

Kickoff is scheduled for 7 p.m. Saturday at War Memorial Stadium in Little Rock.

As previously written on Best of Arkansas Sports, Eric Musselman could potentially soon change the meaning of “triple-double” for Arkansas basketball.

After landing the five-star trio of Nick Smith Jr, Anthony Black and Jordan Walsh in the 2022 cycle, the Razorbacks could be on the verge of joining an exclusive club by doing it again in 2023, but it’s far from a done deal.

Currently, only one player is committed to Arkansas in the 2023 class and that’s Little Rock native Layden Blocker, who plays at Sunrise Christian in Wichita, Kan. He is still a four-star prospect, but had a huge summer playing with Brad Beal Elite and is knocking on the door of five-star status.

In fact, both Rivals and 247Sports moved him up to No. 29 nationally in their latest ranking updates. That is typically within the five-star range by the end of the cycle. He is also No. 27 on ESPN, helping him check in at No. 22 — the highest four-star recruit — in the 247Sports Composite.

The other dominoes that would need to fall include landing commitments from Ron Holland and Baye Fall — both of whom are comfortably within five-star status by the recruiting platforms.

Holland included Arkansas in his top five over the summer, while multiple experts have made public predictions that Fall would pick the Razorbacks.

Perfect Game recently updated its player rankings for 2023 and Arkansas baseball now sits atop the class, just ahead of SEC foe Vanderbilt.

The Razorbacks have a whopping 10 commitments from players inside Perfect Game’s top 100 prospects, highlighted by No. 4 overall Aidan Miller. The Florida prospect had an incredible summer that included being named the MVP of the High School All-American Game and winning the High School Home Run Derby — both of which were at Dodger Stadium as part of MLB’s All-Star Week festivities.

Fans will have another opportunity to see Miller in action at a big league park this weekend, as he is slated to suit up for the East squad in Sunday’s Perfect Game All-American Classic at Chase Field in Phoenix — home of the Arizona Diamondbacks.

He could find himself stepping into the batter’s box with another Arkansas commit behind the plate and any one of three Arkansas commits on the mound, as the West squad features four of the Razorbacks’ top-100 recruits: right-handers Dylan Questad (No. 34), Gabe Gaeckle (No. 38) and Barrett Kent (No. 57), and catcher Ryder Helfrick (No. 40).

Gaeckle was actually a recent addition to Arkansas’ 2023 class, as he flipped his commitment from UCLA to Arkansas on Aug. 13.

The Razorbacks are no strangers to bringing in highly touted signing classes, as they’ve had top-five classes each of the last four years and have been in the top 12 every year since 2016, but this is new territory. Their highest finish in Perfect Game’s rankings was No. 2 in 2014.

On top of that, the 10 top-100 recruits are believed to be a record if they all remain in the top 100 and sign with Arkansas. The previous record, based on our research, was nine by Florida in 2011.

Of course, it’s worth noting that just because these players are committed to Arkansas — and even if they sign a National Letter of Intent this fall — doesn’t mean they’ll actually make it to campus. Baseball is a unique sport in that high school players can get drafted and turn pro straight out of high school. That happened with top-100 signee Cole Phillips this summer and several other in previous classes.