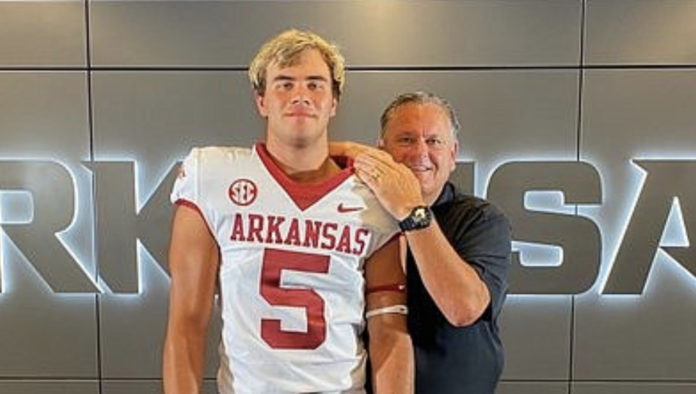 There is a perception amongst some Arkansas football fans that pretty much everyone — from the SEC office to ESPN and recruiting services — hates the Hogs.

While it may not be a majority, there is certainly a chunk of the fan base that feels as though the Razorbacks are treated as the ugly step-child in the conference.

That isn’t totally unfounded, as there are plenty of examples that seemingly give credence to those feelings, such as questionable calls in losses at Florida in 2009 and Auburn in 2020 and being relegated to FloSports and early kickoff times.

Another one of those instances happened this week, when Rivals updated its rankings for the top 250 players of the class of 2023. Luke Hasz, formerly ranked as the No. 1 tight end in the nation and top recruit in Oklahoma, fell 128 spots to No. 206 overall.

That was easily the largest drop among the top 250 recruits, with only two other prospects seeing a triple-digit decrease in their ranking. Including the small eight-spot drop he had in the previous update, Hasz has fallen 136 spots in the rankings since he committed to the Razorbacks as the No. 70 overall recruit in the country back in January.

It’s a tale as old as time: Highly touted recruit commits to Arkansas and immediately falls in the rankings.

However, does Rivals — or any of the other recruiting services — really “hate the Hogs”?

An Inside Look at Recruiting Rankings

To answer that question, let’s first examine the services doing the actual rankings. Rivals was the first major website to rank high school prospects, followed by ESPN, 247Sports and now On3 over the last decade or so.

Each year, the recruiting analysts at those sites are tasked with sifting through thousands of players — the NFHS reported more than a million kids participated in high school football in 2019 — and then projecting them to the next level with various grading systems.

That’s an impossible task, but technology — such as social media and Hudl — has made it easier and data show the services are actually quite good at what they do when looking at it from a broad view. Teams that recruit the best are the ones that win national championships and recruits that are rated higher get taken in the NFL Draft at a higher rate.

In fact, every national champion since 2011 has done so with a “Blue-Chip Ratio” of at least 50 percent. A term dubbed by 247Sports’ Bud Elliott, the Blue-Chip Ratio is the percentage of four- or five-star recruits in a school’s last four signing classes. Having at least half of your signees rated that highly doesn’t guarantee success, but it is a virtual requirement to win a national title.

When it comes to the NFL Draft, there’s almost always an under-recruited player who surges into the first round that (uninformed) fans point to as an example that recruiting rankings don’t matter. While that can be true on an anecdotal level, that isn’t the case in general.

However, as an Arkansas football fan, you’re probably wondering why that matters for the Razorbacks.

There are seemingly numerous examples of players dropping in the rankings after committing too Arkansas. Before Luke Hasz, fellow 2023 commit Quincy Rhodes debuted as a four-star recruit on Rivals and was promptly downgraded to three-star status the day after he announced his pledge.

That instance was just a case of unfortunate timing, as Rivals was in the midst of a rankings week and was already planning the move down before his announcement. Still, it was a tough look and further evidence — in Arkansas fans’ eyes — of bias against the Razorbacks.

While that’s a logical conclusion to draw, most analysts don’t work like that. Those I have come across put a lot of time and effort into coming up with their own rankings with no outside influences like what school a player is committed to.

Still, it’s only human nature for an offer from prestigious programs, such as Alabama, to catch your eye and create a subconscious bias. After all, Nick Saban has an incredible track record of finding talent and putting it in the NFL, so if he likes a player enough to offer him, he must be good, right?

That’s one reason Luke Hasz’s fall was so surprising. Even though he’s been verbally committed to the Razorbacks since Jan. 22, Hasz was still actively recruited by other programs. He officially visited Alabama the first weekend of June and was scheduled to visit Michigan before canceling and ultimately sticking with Arkansas.

So what led to the huge drop?

It probably didn’t help that Hasz didn’t play the recruiting game. A source told Best of Arkansas Sports that he didn’t attend camps or play 7-on-7 this summer. There was even one event that he skipped because he didn’t want to miss a workout with his high school team.

Those are the kind of events that help a recruit climb the rankings. Hasz burst onto the scene pretty early in the process and was even a top-50 prospect when he committed to Oklahoma over the summer before his junior season. That left a lot of room for him to fall when he wasn’t consistently getting in front of recruiting site evaluators and other late-bloomers were.

Hasz isn’t the first person to experience such a fall. Before his junior season of at Warren High School, Treylon Burks debuted at No. 22 in the Rivals rankings. By the time he signed with the Razorbacks, he fell to No. 146.

A torn ACL during his senior year likely didn’t help, but most of Burks’ drop came before the injury. Even though most people in Arkansas who saw him play recognized him as a five-star talent, he was too busy hunting and fishing to attend camps where evaluators could get an up-close look at him. Plus, Warren isn’t exactly an easy travel destination.

In that same class, tight end Hudson Henry was also highly ranked early on, checking in at No. 65 in the nation before his junior season at Pulaski Academy. He was still in the top 100 until right around the early signing period when he fell to No. 118, but then he fell entirely out of the Rivals250 in the final update.

Once considered the top tight end in his class, similar to Hasz, Henry ended up at No. 10 — exactly where Hasz is now. His drop was reportedly due to a subpar showing at the Under Armour All-American Bowl.

Fast forward three years and Rivals probably deserves an apology from some Arkansas fans because — while he still has time to turn things around and he’s been hindered by injuries — Henry has not lived up to those lofty expectations. In fact, Best of Arkansas Sports currently projects him as the No. 4 tight end on the team. Burks, on other (rather large) hand, made the rankings look silly.

It’s also worth noting that some prospects have climbed the rankings after committing to Arkansas. Quarterback KJ Jefferson was a late addition to the Rivals250 in that class and he’s proven that was a good call.

Nonetheless, it is easy to see why such huge drops in the rankings are frustrating to Arkansas football fans.

Recruiting is extremely important in college football. Luckily for the Razorbacks, they have a head coach who thoroughly understands that. Sam Pittman was always an excellent recruiter as an offensive line coach and now — after learning under Kirby Smart, who learned under the aforementioned legend that is Nick Saban — he’s bringing that mentality to Fayetteville.

Arkansas currently has the No. 14 class in the country for 2023, according to Rivals and 247Sports, and has a legitimate shot at a rare top-20 finish.

It’s fair to think Pittman can build on that with another solid season this year. Not only will winning attract top talent, but it would continue to change the perception of the program and potentially help future Arkansas commits avoid as large of ranking drop-offs as the one experienced by Hasz.

Other 2023 Tight Ends Committed to the Razorbacks

For many schools, Luke Hasz would be by far the top tight end in a recruiting class. For Arkansas football, though, he is just one of three heralded players committed at the position.

In addition to Hasz, the Razorbacks have also landed the pledges of four-star tight ends Shamar Easter and Jaden Hamm. They were actually the first and second players, respectively, to join Arkansas’ 2023 recruiting class, committing on back-to-back days last August.

Easter is now the highest-ranked player of the bunch, according to Rivals. The in-state product out of Ashdown is No. 155 overall and the seventh-best tight end in the latest rankings update. Hamm is still a 5.7 three-star on Rivals, but the Kansas native did move up to No. 25 in the position rankings and is the fourth-highest ranked tight end outside of the four-star range.

All three of them are four-star recruits and among the top 20 tight ends nationally on 247Sports.

Listen to more about the 2023 Arkansas recruiting class:

And watch some of the latest footage of Luke Hasz: